'Dapper Men,' 'Mouse Guard,' cool, but not for all

Jan. 4, 2011 -- Some times it’s more obvious than others that comics are ultimately a matter of taste. Take for example Return of the Dapper Men ($24.95, Archaia), by comics writer Jim McCann and gallery artist Janet Lee. Dapper Men is a surreal, “Alice in Wonderland” sort of adventure, about a land named Anorev (Verona backwards, although I don’t know why) where time has stopped, populated entirely by children under 11 who never age, plus some anthropomorphic robots. Then the 314 Dapper Men show up (they are identical men dressed in green derbies and tailored 1920s suits; none have names, nor do we know why they’re “returning” when nobody remembers them, nor why there are 314). They jump-start time, and our heroes – a boy named Ayden and a silent female robot named Zoe (I get it, A to Z; but again, I don’t know why) – must learn about night and change, and by extension aging, aided by the only Dapper Man who speaks (albeit cryptically).

It’s a pleasant, light morality tale, full of potential to prompt children to ask questions about growing up, and surely all the whimsical, unexplained elements are allegories or allusions. Or maybe not. I mean, when the talking Dapper Man says, “nothing is the same after it’s cold,” he’s referring to death, right? Or is it just a throwaway line about tea? I just don’tknow.

I suspect there are things I’m simply not catching, since I enjoyed McCann’s work on Hawkeye and Mockingbird fo rMarvel, where he showed sure-footedness in story structure and, if nothing else, the cliff-hanger. But since I have no children to read this to, and have read all the Dr. Seuss I will ever need, this sort of thing isn’t my cup of tea– cold or otherwise.

But let’s leave aside the story, which is probably meant to be little more than a fairy tale (albeit a surreal one). Because the real star is the artist, and Lee does not disappoint. Archaia editor-in-chief Stephen Christy told Publishers Weekly (publishersweekly.com) in December, "We don't have a big-name writer, a big-name artist or a hugely established concept – let’s just make sure the quality across the board is phenomenal.” And I think they succeeded.

Working in decoupage, Lee uses elements of steampunk, Art Deco, Art Nouveau and God only knows what else for a spectacular, multi-textural tour de force. It all hangs together nicely to create a fantasy world that actually seems to make sense.

And, as Stephen Colbert would say, the market has spoken on Dapper Men – it quickly sold 10,000 copies and went back for a second printing of 5,000. That’s a lot for a hardback no one’s heard of before. Ergo, a many people are getting more out of it than I did, so I recommend you judge for yourself. Who knows – maybe you can show me what I missed! 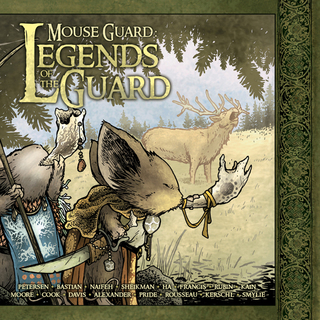 And speaking of successful sales, Archaia also scored with Mouse Guard: Legends of the Mouse Guard ($19.95), a hardback collecting the recent four-issue series of the same name. According to PW, Legends also had a successful print run of 15,000.

Legends varies from David Petersen’s usual Mouse Guard books in that he doesn’t write or draw it. Instead, he opened the concept for other artists and writers to take a whack at his world of medieval mice in an anthology format. Petersen ties the stories together as a bar contest, where the most successful tale-teller gets his tab erased. That eliminates the necessity for fitting them into Mouse Guard history and continuity, and for the guest creators to write to their own strengths.

And when you’ve got guys like Gene Ha (JLA),Terry Moore (Strangers in Paradise) and Ted Naifeh (Courtney Crumrin), that’s a darn good idea. Plus, there are great extras in the back for the committed fan.

And, sure, it’s kinda ridiculous for sword-wielding mice to be battling (and beating) owls, weasels and even in one case a bear. But Petersen’s world is so fleshed-out and compelling that it’s practically Lord of the Rings with fur, tails and buck teeth.

On the other hand, my wife can’t suspend her disbelief (and her dislike of rodents) long enough to enjoy Mouse Guard. “It’s MICE!” she shouts with a mixture of disgust and disbelief.

Heh. So like I said, comics are ultimately a matter of taste. I suggest you lick both of these books, just to see.