They say crime doesn’t pay, but Crime Does Not Pay sure did. Now, thanks to Dark Horse, we can see what made this particular comic book so successful – and notorious.

Crime Does Not Pay began in 1942 at small Lev Gleason publications, co-edited by Bob Wood and Charles Biro, who contributed stories and art as well. It was the first “true crime” comic book, which is to say it purported to relate actual crimes committed by actual criminals, occasionally famous ones like Lucky Luciano and Baby Face Nelson. Of course, reality often took a back seat to fiction when the story called for it, or out of sheer sloppiness. It was a comic book, not a history book! But fiction or not, Crime Does Not Pay sold like gangbusters, with reports of anywhere from one to four million copies a month at its peak, even when there were dozens of imitators on the stands. The secret was its sheer luridness; covers showed bullets flying, brains exploding, faces pushed into burning stoves, you name it. Given the title, there was always some sort of coda at the end explaining how the criminal was killed or imprisoned, but nobody was fooled that this was a Sunday school lesson, given how the preceding pages would glorify the criminal’s short, fast life full of sex, violence and money. Plus, the word “CRIME” was huge on the cover, with “Does Not Pay” almost an afterthought.

The gusto with which Biro and Wood delivered the goods made Crime a target for censors, and it was a favorite example of such notables as Fredric Wertham, author of the anti-comics screed Seduction of the Innocent. The outrage against comic books like Crime culminated in 1954 with the infamous Comics Code, which nearly killed the industry and definitely put a bullet through the “true crime” genre. Within a year, Crime Does Not Pay and its ilk were out of business.

In a strange coda, co-editor Wood murdered his girlfriend in a style reminiscent of a Crime Does Not Pay story (he bludgeoned her to death with a clothes iron in a hotel room during a long drinking binge). After serving time, Wood was himself murdered, probably over gambling debts.

Which, in a roundabout way, brings us to Blackjacked and Pistol-Whipped: A Crime Does Not Pay Primer (Dark Horse, $19.99). This collection of Crime Does Not Pay tales is the first such I’ve seen, and the cover – a recreation of the style of the day by Pete Poplaski – depicts Wood’s horrific act of violence. The interior contains an introduction by 100 Bullets writer Brian Azzarello; a lengthy foreword by comics publisher, historian and editor Denis Kitchen; and 24 representative stories from Crime Does Not Pay at its most lurid. 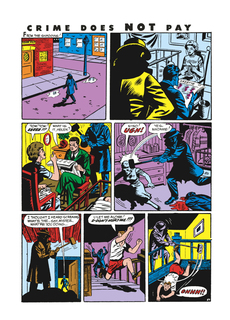 These stories are utterly absent any redeeming value, which is probably why they’re so incredibly entertaining. They are the guiltiest of guilty pleasures. But another factor is the talent – not only were the stories short and punchy, but the art was often by the likes of Dan Barry (Flash Gordon), Carmine Infantino (The Flash), Fred Guardineer (Zatara the Magician) and George Tuska (Iron Man).

And the influence of Crime Does Not Pay lives on, although not in obvious ways. The apex of violence found in 1940s comic books doesn’t hold a candle to what you can see on TV and in the movies today, so we’ll likely never see another successful “true crime” comic book. But supposedly Crime inspired Harvey Kurtzman’s critically acclaimed war comics from EC Comics in the early 1950s, a high-water mark creators are still trying to top. And the host of Crime – Mr. Crime, a ghostly, ghastly figure in a sheet with “CRIME” emblazoned on a top hat – preceded and probably inspired the three punny “ghoulunatics” who hosted EC’s horror comics, which in turn served as models for the legion of horror hosts that have followed.

Which is not to say Crime Does Not Pay was itself wholly original. Mr. Crime was a rip-off of “Mr. Coffee-Nerves,” the corporate mascot of Postum coffee substitute. And the name “Crime Does Not Pay” was lifted from a series of MGM movie shorts which were turned into a long-running radio show.

But who cares? Kids bought Crime for the crime, and the rest didn’t matter. Even in today’s more jaded times, the guilt-free exuberance the creators poured into every bullet and blood spatter is infectious. This Crime pays, with hours of fun.

1. Blackjacked and Pistol-Whipped is a guilty pleasure from the 1950s. Courtesy Dark Horse Books

Comment by Rob Staeger (Grodd Mod) on October 29, 2011 at 3:17pm
I've got one original Crime Does Not Pay issue in my collection -- I'll definitely be checking this out!

Comment by Captain Comics on October 29, 2011 at 4:11pm
Apparently this book did very well, because DH has announced plans for a comprehensive CDNP archive. I'll be first in line!

Comment by Captain Comics on October 29, 2011 at 4:32pm
I'd have to look it up when I get home, but I think it's Kitchen who establishes it was murder (while acknowledging the "cover story" that got circulated for a while, about a hit-and-run).

It depends on how broad your definition of the industry is... wasn't there a retailer recently convicted of murder?

And that's great news about the CDNP Archives, Cap!

Comment by Emerkeith Davyjack on October 29, 2011 at 10:00pm
...Bluntly , I believe that spousal/lover abuse/murder/etc. used to get rather lesser prison sentences thn has tended to be the case in the - both - " tough-on-crime " and post-second-wave feminismsocial climate of the last twenty years !!!!!!!!! For celebrity murders of the time , look up " Spade Cooley"  (who is supposed to have a movie about him coming out soon) sometime .

Comment by Philip Portelli on October 29, 2011 at 10:04pm
Every branch of entertainment has its sordid tales. Why should comics be any different?

Comment by Jeff of Earth-J on October 31, 2011 at 2:06pm
As I mentioned in my review of CDNP (here: http://captaincomics.ning.com/forum/topics/crime-does-not-pay), the one complaint I have about the collection is that it lacks a section of full-sized glossy reproductions of the lurid covers (such as Fantagraphics provided in their own Four Color Fear collection).

Right now, I’ve got a line on some pre-code Harvey Comics reprint collections (Chamber of Chills, Witches Tales, Tomb of Terror, Black Cat Mystery) published only in the UK.

Comment by Captain Comics on October 31, 2011 at 2:55pm
Last night, in response to a question on this thread, I pulled out my copy of Joe Simon's The Comic Book Makers (2007), and sure enough, he says Bob Wood was "taken for a ride" over gambling debts, with his body dumped on the New Jersey Turnpike.

Comment by Jeff of Earth-J on November 2, 2011 at 3:44pm
Guess what! Dark Horse has solicited the first volume of the comprehensive Crime Does Not Pay Archives for March 28 release!

I mentioned the Archvies earlier in the thread -- second comment. Also, I've used the CDNP Archives art as the teaser to the January Dark Horse solicitations for a couple of weeks.

*Sniff!* I work my fingers to the bones posting all this stuff, and what do I get? BONY FINGERS! *Sob!*