Ever see someone do something so well it discourages you from ever trying?

As a wannabe comic-book artist myself, there have been a lot of masters over the years that have that have been that good. And of those masters, few are as magnificent as the man who created “The Rocketeer.” In Dave Stevens: Covers and Stories (IDW Publishing, $49.99) you can see how good. 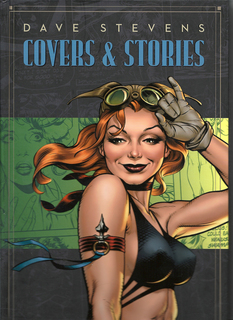 Stevens, who died at age 53 of leukemia in 2008, left a relatively small body of work even accounting for such an early death. And most of that work was scattered hither and yon; some covers here, some short stories there, some inking way over yonder. While “The Rocketeer” comics and stories have already been collected in a variety of formats, this is the first book to collect Stevens’ other wide-ranging material, some of it published, but also sketches, first drafts and other unpublished work.

And it’s ridiculously good. Stevens is renowned for his gorgeous women, his lush brushwork, his exquisite rendering, his perfect perspective, his flawless anatomy, his creative use of light and, of course, for restoring the spotlight to 1950s pin-up queen Betty Page, by incorporating her image into his own work. All of that is on display here in all its stupefying gorgeousness.

I should point out that Stevens drew from live models and often failed to put shirts on his girls (especially in sketchwork), so keep the kiddies at bay.  Also, I found a sketch where Stevens was evidently having some trouble foreshortening an arm, erasing and re-drawing a lot. That’s reassuring, in that it proves he was human. And now we have this book, where I can admire again and again the level of work we lesser humans can never achieve.

Speaking of sketches, Steven Heller of New York’s School of Visual Arts has put together a hefty tome collecting samples from sketchbooks from an army of artists. Comics Sketchbooks: The Private Worlds of Today’s Most Creative Talents (Thames & Hudson, $44.95), samples more than 80 artists from the U.S., Europe, South America and Japan.

That’s a lot of artists, which means a mouth-watering cornucopia of styles and genres, some famous and some not. The downside is you only get 2-3 pages per artist, which in some cases is just a maddening taste of a fuller meal. But where else are you going to get famed comics artists Jim Steranko and David Mazzuchelli, caricaturist Drew Friedman, “underground” cartoonist R. Crumb, animation great Chris Battle and editorial cartoonists from Cuba between the same two covers?

Still, I can only recommend it for academia, hobbyists and pros, as I don’t think it offers much to the general public.

Meanwhile, I can’t let another week go by without touting a new graphic novel about one of the seminal events of World War II. Writer/artist Wayne Vansant has given us Normandy: A Graphic History of D-Day, The Allied Invasion of Hitler’s Fortress Europe from Zenith Press ($19.99).

Vansant drew Marvel’s The ‘Nam for a number of years, and his art bears a strong resemblance to Sam Glanzman, who drew war comics for both Marvel and DC Comics for decades. But while retaining Glanzman’s sketchy approach, Vansant isn’t as strong in rendering, so some panels look like pencil roughs. Nevertheless, while the result can be cartoony – off-putting given the bloody story – Vansant tells a lot with a little.

And speaking of the story, Vansant manages to retain the adrenaline-charged, throat-grabbing horror of the days between June 6, 1944, and the liberation of Paris, while still maintaining a reportorial distance. The words establish the factual narrative, while the pictures provide the emotional body-blows.

It’s a nice balance, and this book ought to be used in every high school history class in America.

Meanwhile, DC’s Get Jiro! graphic novel has been in my to-review pile for a while, and the reason is that I didn’t much care for it.

Jiro is by famous chef Anthony Bourdain, writer Joel Rose and artist Langdon Foss (with Jose Villarrubia), and is set in the near future where chefs are the pop superstars of the world. That obvious wish fulfillment was annoying, but not a deal-breaker.

What’s wrong is that Bourdain goes whole hog, positing a world where chefs are legally allowed to slaughter diners who don’t properly appreciate them. I’m sure that was hysterical when this was being plotted, but the upshot is that Jiro – a sushi chef caught between warring restaurant barons – ceases to have the audience’s sympathy when the first few pages depict him decapitating people whose only crime is dunking their fish in the wrong sauce. After that scene I didn’t much care what happened to Jiro, and I’m pretty sure I was supposed to.

Still, there are some funny bits, if you enjoy over-the-top satire. The artwork is a bit too fussy for my taste – it’s a highly detailed, lifeless cartoon style with a minimum of shadows – is nevertheless quite clean, with clear storytelling.

While not my cup of sake, it might be of interest to those who watch The Food Channel.

2. Comics Sketchbooks features sketches from a wide array of artists. Copyright Thames & Hudson.
3. Normandy recounts the story of the Allies from D-Day to Paris both factually and breathlessly. Copyright Zenith Press.
4. Get Jiro! is a satire of a near-future where chefs are at the top of the food chain. Copyright DC Comics.