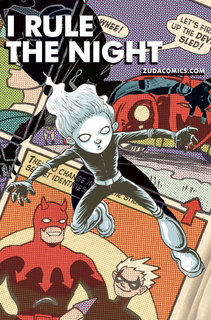 Wildstorm has contracted these past couple weeks. This is the third week without the Core Four in the lineup, and the imprint released only four books this week: Ex Machina, Welcome to Tranquility, and the licensed series Supernatural and Gears of War. Supernatural has one more issue left in the tank, plus two specials so far unaccounted for. Planetary remains on hold, and there’s still no sign of a second issue of Kane & Lynch.


Zuda provides its customary 4 titles, including the free debut of Kevin Colden’s sidekick intrigue/coming-of-age story I Rule the Night. Returning books are Blood Hunter, High Moon and Night Owls – which incidentally has been nominated for a Friends of Lulu award.


So things are pretty much business as usual at DC’s three ancillary imprints. The DCU, on the other hand, has plenty of interesting news.


First of all, All-Star Superman has at the moment been replaced with… drumroll, please… NOTHING. There’s no solo superman book this week, so if you want a Kryptonian fix, you’re going to have to go to Superman/Batman.


Batman, on the other hand, is rolling seven after seven. Not only does the Morrison run get another issue, and the Winick Red Hood run get another three issues, but the Bat-titles embark on a third story, as well – The Resurrection of Ra’s Al Ghul, a multi-title crossover which had been skipped over in the Morrison run. The first three issues – Batman Annual 26, Robin Annual 7, and Batman 670 – are up right now. And in the Batman thread, Figserello helpfully posted the throughline of the story, which I’ll reprint here. Expect some Robin, Nightwing and Detective Comics in our future.


This is a particularly helpful list, since the way Comixology has things are set up now, it’s really difficult to follow a crossover storyline. The other night I asked them about this, suggesting a solution:


I was wondering if you have plans to alter the functionality of your store to enable users to follow crossover storylines. For example, the new storyline The Resurrection of Ra's Al Ghul, starts in Batman Annual 26 -- but if you click the next button, it leads you to Batman 404, the first part of Batman Year One instead of Robin Annual 7 (and eventually Batman 670). This is an issue with the Sinestro Corps War, too, as the storyline bounces between Green Lantern and GL Corps (and the Sinestro one-shot). Is there a way to have one of the links on the side to be the title of the story, and clicking on that would lead users to a page that collects that storyline, in order? I think something like that could be very helpful.


Thanks, and keep up the great work! 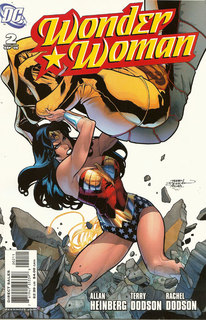 got a response, but there weren’t any specifics in it. They thanked me for my interest, and assured me that this is an issue they’re looking into, and these are early days of the software – there are plenty of innovations on the way.


This week’s free secret origin is of Ra’s Al Ghul, our first villain. We’ve also got a free 10-page preview of a recent book – in this case, Green Lantern: Emerald Guardians. I wonder if these previews will also be a weekly occurrence. There’s no reason why not! Zatanna and Freedom Fighters could both benefit from this treatment – as could issue 13 of Power Girl.


DC’s big debut this week isn’t a debut at all – it’s Wonder Woman issues 2 and 3. The only WW action we’ve seen so far was tied into the costume change, on the second week of DC’s digital program. There’s been the 10-page preview of issue 600, the release of the first Perez issue, and the release of the first Heinberg/Dodson issue. Now that issue has been followed up. Does this mean Jodi Picoult is looming? Should we brace ourselves
for Attacking Amazons? I suspect DC is trying to get as much Gail Simone
material online as possible, and by starting a little earlier in Wonder Woman,
they’ll be able to launch her run in a couple months, once Tranquility is caught up.


Otherwise, DC’s series keep pressing ahead: Birds of Prey (with 2 issues), Green Arrow (down to one issue for the first week), Green Lantern, JLA, Jonah Hex, and Superman/Batman all continue as expected.

Comment by Rob Staeger (Grodd Mod) on September 16, 2010 at 1:44pm
Just noticed something interesting: Batman 663 (Morrison & John Van Fleet's prose Joker story) is now available. The Comixology site says it was released July 15, the same week as the Ostrander/Mandrake Grotesk storyline. But in this post from two weeks later, I'm mentioning that the book isn't up.

It's possible the Comixology has put the book up and back-dated the entry, but I don't really see the point -- why do that in secret when you can put a new Morrison story up in the New Releases section? A more likely scenario is that it was available for the iPonies, but an oversight left it out of the PC offerings, and was subsequently corrected.

Incidentally, the book is listed as being 13 pages long; I haven't looked at it online, but I suspect that because of the book's odd design, each spread is being counted as a single page.

Comment by Travis Herrick (Modular Mod) on September 16, 2010 at 3:41pm
Rob, just a suggestion, but I think a reminder of what the "Core Four" from Wildstorm are would be helpful.

Comment by Rob Staeger (Grodd Mod) on September 16, 2010 at 4:10pm
You're right; it's my term for the 4 Wildstorm Universe titles that have shown up so far: The Authority, WildCATS, Gen 13 and Stormwatch. They had regular releases for the first few months, but in the last three weeks they've been dropped.

Comment by Rob Staeger (Grodd Mod) on September 18, 2010 at 2:25pm
It occurs to me that Green Lantern Corps might be starting up fairly soon. The print comic began its run around the time the green Lantern title reached issue 6 or 7.