Well, maybe that’s a trifle alarmist, but that’s what occurred to me when I realized what a large portion of DC’s digital release program is devoted to Green Lantern… and how precious little of the current run is left.

The Green Lantern comic is currently up to issue 59, and Green Lantern Corps is up to issue 55. That leaves only 15 issues of Green Lantern, and 25 issues of GLC, without digital release. Even if DC limits itself to one a week, that’s only four months left of GL before it catches up to day-and-date (well, five, since GL will continue to release issues during that time). Will DC let this convergence happen? Or will it need some other title to fill the GL-shaped hole in the schedule?

What’s interesting about this problem is that I suspect it’s not just Green Lantern material that DC would like to release – it’s Hal Jordan material, and beyond what’s already seen the light, there’s just not that much modern material starring Hal. Will DC want to release his Spectre run, or will that confuse moviegoers? How about his turn as Parallax in Zero Hour and Final Night? Or will DC dig deeper into its library, releasing the early Broome/Kane issues, or the O’Neill/Adams run? I’ll be very curious to see how this shakes out – because I don’t think DC’s answer will be to conserve its precious Green resources. 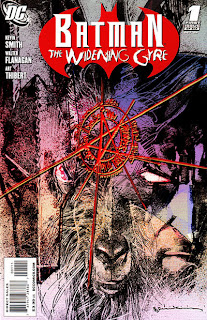 As for the rest of this week’s releases, DC seems to be plugging away at its current lines. Sleeper Season Two begins this week, and there were also the three Justice Society Kingdom Come one-shots, but both of those are extensions of current releases. In all honestly, the only thing that could genuinely be called a debut this week are the first two issues of Kevin Smith’s Batman: Widening Gyre. It’s a 6-issue series, with two follow-ups – one published, and another yet to come, if I recall correctly.

A couple of other series also made their final bow this week: Identity Crisis and Flash: Rebirth both published their final issues, as did the Amanda Conner Power Girl run. (We’ll see if the Power Girl releases continue next week; I doubt it, but the book’s tied to the day-and-date Generation Lost, so you never know.)

DC doesn’t have a whole lot of new Barry Allen material with which to follow Rebirth, but releasing the Johns Wally seems a likely option – if it weren’t for the fact that an expensive hardcover of those issues is already on the schedule. Will DC want to cannibalize those sales? In any case, one possibility would be to at least release the Identity Crisis tie-in issues of the Wally run, “The Secret of Barry Allen” which ran from 214-217. There were some well-done issues of JLA that tied in with Identity Crisis, too, and they’d be better released sooner than later, as well.

Otherwise, we see a lot of continuations of current series. We get two issues each of 100 Bullets, Birds of Prey, Ex Machina (like last week, one’s a Special), Hellblazer, Invisibles, JLA, Justice Society (along with the Kingdom Come specials), Starman, Swamp Thing (who now has buttons on both the DCU and Vertigo pages), Transmetropolitan and Wonder Woman. We get single releases of The Authority, Batman: The Long Halloween, Brightest Day (it continues!), Chuck (last week’ll be the last issue), Green Arrow, Green Lantern and GLC, Justice League of America, Generation Lost, Kane & Lynch (absent since early October!), Mysterius, Planetary, Sandman, Superman (For Tomorrow), Superman/Batman, Welcome to Tranquility, World of Warcraft and Y: The Last Man. This week’s origin tale is Solomon Grundy.

The DC store has Generation Lost as its banner, with Brightest Day, Transmet and World of Warcraft being the buttons.

Of course, my first DC purchase this week was Justice League: Generation Lost. My non-DC purchase the same day was Incorruptible #s 9 and 10. Today, I bought Batman: The Widening Gyre #s 1 and 2 plus Chuck issues 3 and 5. I already have Chuck #s 1, 2, and 4 that I bought for well below cover price so ComiXology is filling the holes for me. When The Widening Gyre originally came out, I was trade-waiting it. I'd rather buy it in this format, though. I just read the first issue and "Wow!" is my reaction.