I originally posted this information in the forum, but I think it might work better as a weekly blog. (So, for people who've read this already, sorry for the repost. No new information here, but the next installment should have some, come Wednesday.) My plan is to examine DC's output every week; maybe a week-by-week analysis will reveal something about their digital strategy. Or not, but worth a try, I think.

(Ironically, so far I haven’t bought any digital comics myself, and I probably won’t until I get an iPad or something similar. The free comics I’ve looked at on my desktop computer have been a real struggle, but on my friend’s iPad, they were completely intuitive.)

Anyway, here’s what happened back on July 14th: 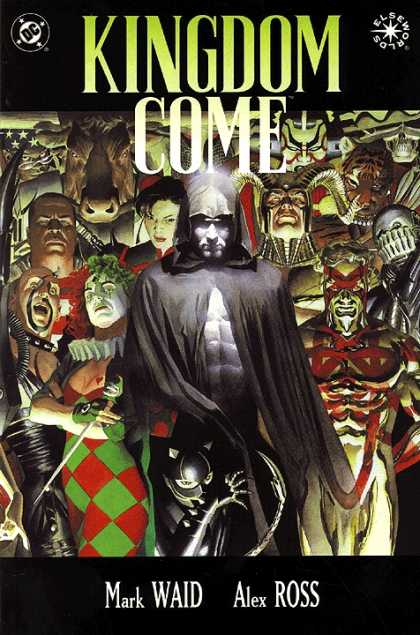 New series introduced include: Azure (a Zuda title, and free), Kingdom Come, Planetary/Batman (a one-shot that follows up last week's Planetary/JLA), and The X-Files issue 0.

Some lines got multiple issues released.

Batman, on the other hand, is all fill-in -- 659-662, the 4 issues of the Ostrander/Mandrake Grotesk storyline that broke up Morrison's run.

DMZ seems to be releasing 3 a week after its initial offering of 5: 9-11 this week. Also like last week, Jonah Hex has 2 new issues, and Superman/Batman has 3.

Green Lantern (in addition to the GLC book) gets 2 issues -- one more issue into Secret Origin, and another into The Sinestro Corps War. They're trying something different with this one, serializing two stories at once. (They're also doing that with Batman at the moment, releasing the Morrison-era books concurrently with Year One. The different Superman releases, on the other hand, are all in different titles.)

Not continued from last week was Victorian Undead, which left off at issue 3.

Along with Azure issue 1, DC's other freebie this week is a short origin of Green Lantern.

Two more comics were added on the 15th: The missing All-Star Superman #4, and Batman #407, the third part of Miller & Mazzuchelli's Batman: Year One. I wonder if those have the original coloring, or the remastered version done for the hardcover.

Like Wonder Woman #1 (released a couple weeks ago), Batman: Year One was released in 1987. So those are the oldest comics DC is offering digitally right now, and 1987 is the year to beat.

(Incidentally, all of DC’s July 14th releases are now listed as being July 15th releases on Comixology’s New Releases page.)

Anyway, I don't know what all this will tell us, but I'm interested in getting it all down and finding patterns in their release schedule. I'm very curious as to how comics are markets and sold, and think it might be interesting to follow one company's strategy -- particularly one with a number of diverse lines, such as DC.

The DC Store Banner is Kingdom Come, and the three buttons below it are Batman, Green Lantern, and Supernatural.

Comment by Rob Staeger (Grodd Mod) on July 21, 2010 at 1:52am
A correction and another thought: Batman 407 is actually the last chapter of Year One, not the third. Which means they might be starting a new Batman story tomorrow, maybe a classic one. Think they'll go for The Dark Knight Returns? Year Two? The Long Halloween? Or something less well-known, but awesome, like Batgirl: Year One? Marcos Martin's star is rising, after all.

Comment by Cavaliere (moderator emeritus) on July 21, 2010 at 2:12am
The only title that DC is releasing through ComiXology the same day that the issue is released in print is Justice League: Generation Lost. I bought the first four issues at my LCS but starting with #5 I'm buying the online version. It actually costs me a little more to buy it that way since I don't receive my subscription shelf discount for the online version. Why do it, then? Two reasons. First, and I keep saying this, storage is a big issue for me. Out of all my monthly titles, this is one that I don't have to make room for and that's worth a few extra cents. Second, I'm hoping that ComiXology and DC (and other publishers, I hope) will see that people are willing to buy comics this way and release more titles with a same-day release.

Comment by Cavaliere (moderator emeritus) on July 21, 2010 at 2:14am
I realized after the fact that I called Generation Lost and monthly title and it isn't. It's twice monthly. And as far as I know, it is the only title with same-day release from ANY publisher, not just DC.

Comment by Rob Staeger (Grodd Mod) on July 21, 2010 at 2:35am
I think you're right, Cav. The only ongoing, at any rate. Marvel released an Iron Man Special (or Annual, I forget which) day-and-date in three parts a couple weeks ago. The price worked out to be more expensive than the physical copy, even without taking discounts into account. $6 electronic for all 3 parts, versus $5 for the printed copy.

I wouldn't be surprised if Boom doesn't get into the day-and-date act, though -- they've done simultaneous electronic releases before; a few years ago they gave away the first issue of a new series free on myspace the same day it hit stores.

Comment by Rob Staeger (Grodd Mod) on July 21, 2010 at 8:18pm
I keep on checking Comixology for updates (maybe later today, maybe tomorrow. Maybe the convention is throwing things off). But one thing I should note: on DC's publisher page, there's a SDCC convention special -- it's 241 pages of free comics, downloadable only this week! From what I can tell, they're the booth giveaways -- first issues of Batman & Robin, Superman & the Legion, Jack of Fables, The Authority, Flash: Rebirth, Scalped, Human Target and Astro City.A lot of good comics!

Comment by Travis Herrick (Modular Mod) on July 22, 2010 at 12:11pm
Brian Hibbs' latest Tilting at Windmills goes into DC's digital comic plans. I found it interesting that comics released for the iPhone app are different than the ones for the PSP. My guess is that the PSP is getting more teenage male friendly titles, and the iPhone would be getting the more adult ones.

Also the free comics are beating the paid ones at a 6:1 ratio currently.

Comment by Rob Staeger (Grodd Mod) on July 23, 2010 at 12:06pm
I'm starting to think that everyone's taking the week off from releasing digital comics (for PCs, anyway).DC's put that sampler up, and since then, nothing. From any company.