Another smaller week for DC’s digital releases, with only 27 being rolled out yesterday. The week before had 29, and before that was a week of 36. I’m not convinced that this means DC’s slowing its output, necessarily. Part of it is simply being methodical about its releases, and part is that Comicon is a huge undertaking, and some of their digital resources probably had other things to take care of. That doesn’t necessarily mean there’s nothing to talk about, though!

Once again, in reverse alpha order:

Zuda: Four Zuda releases this week, with High Moon, Azure and Bayou each getting one-issue extensions. The Night Owls gets left out in the cold this week, however, to make way for the free debut of a newcomer, Andy Bellanger’s Bottle of Awesome! (Judging the book solely by its cover, I'd guess this is being rolled out to ride the coattails of the Scott Pilgrim hype.) It remains to be seen what happens next. Does Zuda only get four “slots”? If so, will the missing title each week rotate? It’s early days, yet, and we don’t know what’s up. 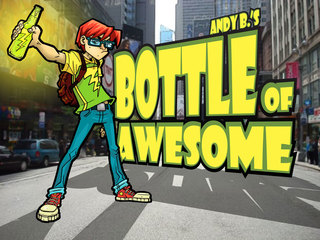 Sometimes I feel like I’m going all A Beautiful Mind, here, searching for patterns that may or may not exist.

Wildstorm: Here’s where the big news is this week, to my mind. Along with the continuations of Wildstorm’s Core Four (Wildcats, Authority, Gen 13 and Stormwatch) and a continuation of a licensed title (Supernatural: Origins, which has only two issues left, but there’s another Supernatural series if WS wants to continue), we see the debut of Brian K. Vaughn & Tony Harris’s Ex Machina, a series that’s closing in on its final (50th) issue in the paper world. Depending on the rate of publishing, it’s a series that could be completed by the beginning of next summer. This week we see issues 1 and 2, with issue 1 being offered free. (Smart move; I read an uncolored preview of the first issue at the DC booth at a con, and that last page made my jaw drop... and convinced me that I had to buy this series.) This is a nice, long-term series for Wildstorm to depend on for a while.

The X-Files gets skipped this week, and will Victorian Undead ever see another issue?

Vertigo, on the other hand, is full of nice, long-term series. There’s no news here – DMZ, Fables, Sandman and Unwritten get one issue each. Well, I guess it’s news that DMZ has slowed to a single, but there are no new launches on the Vertigo side. I’m hoping that changes soon. Unwritten, incidentally, is one of the most recent books DC is publishing here, lagging only 11 months behind its paper publication. At one issue a week, it will catch up sometime in December… so I wouldn’t expect this rate to continue much longer, unless Vertigo is sneaking up to a day-and-date scenario.

The DCU, on the other hand, has just leapfrogged over Unwritten with this week’s launch of War of the Superman #0, which debuted this May as a Free Comic Book Day giveaway (it’s free here as well, though it was initially listed at 99 cents by mistake). There are four more issues of this story, unless DC decides to release the next chapters in the two 2-issue collections that recently graced the stands. (I doubt they will, but you never know.) This Superman story seems to have replaced the Action Comics slot.

Of course the most recent book is DC’s day-and-date release of Justice League: Generation Lost, which has reached its 6th issue. I saw someone on a message board say he got it for $1.99, but it seems like that was a glitch; it’s priced at $2.99 now, the same as the print comic.

Most of the rest of the titles just chug along with one issue: Batman, Jonah Hex, Kingdom Come (one issue left, and then… what?), Superman/Batman, and the free Secret Origin, this one of Robin. Green Lantern Corps gets two issues this week – probably because it was published a little more quickly than the main GL title during the Sinestro Corps War, and this helps the story keep pace. Green Lantern proper only gets one issue released this time, though – which means the Secret Origin story is on hold for now, with two issues left.

One other thing of note, that I overlooked last week. When the Morrison Batman returned after a week of the Moench/Mandrake Grotesk story, I hadn’t realized the title skipped an issue. It did: issue 663, Morrison’s illustrated text story about the Joker that was so muddily designed that it was difficult to read, even on the page. I don’t blame them for skipping it; I just with they’d release it in a format that would make me want to revisit it at all.

DC has also updated the DC Store this week, featuring War of the Superman as the banner, and Generation Lost, Green Lantern and Batman as the three buttons. Specific issues featured are the new issues of Bottle of Awesome, Kingdom Come, High Moon, Wildcats, All-Star Superman, Planetary, Superman/Batman and Batman. No Vertigo is represented at all. Hopefully they have something up their trenchcoat sleeves for next week.

Next week’s look might be delayed a bit, by the way; I’ll be on vacation, probably clipping newspaper articles about the Green Lantern movie and stats about the circumference of Hector Hammond's head and affixing them to a wall full of post-its and scribbled notes about how it is that Iris Allen could still be thirty but also be a grandma.

Comment by Cavaliere (moderator emeritus) on July 30, 2010 at 9:59am
Just Generation Lost for me this week. The next part of Green Lantern's "Secret Identity" arc didn't come out this week.

Comment by Cavaliere (moderator emeritus) on July 31, 2010 at 10:21am
I just read the free issues of Superman: War of the Supermen and Ex Machina #1. I know that my son has the Superman story somewhere in his room from Free Comic Book Day 2010 but I hadn't read it before. It was pretty good. Ex Machina, though, was astounding. I was only about halfway through the issue when I went to my library's website and reserved the tpb. This, my friends, is a story that I have to read more of! It's also, I'm 100% sure, not what ComiXology is going for.

I've purchased several issues from them because I enjoyed the free previews that ComiXology has provided but I'm also frugal enough that I'm going to use the library if I can. Still, by having free previews they've made me a customer for Incorruptible (five issues so far), The Resistance (a graphic novel), Mercy Sparx (two issue so far), and Mage: The Hero Discovered (two trade paperbacks*) so that "first one's free" policy seems to be working quite well.

*I should probably call these collections, not trade paperbacks. It's hard to be a paperback when there's neither paper nor a back.

Comment by Rob Staeger (Grodd Mod) on August 2, 2010 at 2:02pm
And yeah, those Mage collections are a GREAT bargain!