Time flies when you’re in a turkey coma. I’d taken my last look at DC’s digital releases so late that by the time I got home from Thanksgiving, I misremembered that I’d already finished last week’s column. So, skip week. And considering DC did a special release last Friday, there’s a LOT to cover. Let’s get right to it.

First, let’s start with DC’s Blackest Friday sale. On Friday (Black Friday), DC released every issue of the enormous Blackest Night crossover event – 79 issues in all – and priced them all at a buck for one day. (The issues have resumed normal pricing now.) It was a great promotion, and hopefully generated a lot of interest for them.

Most of these comics were specific, Blackest Night-branded miniseries: Blackest Night Superman, Batman, Wonder Woman, JSA, Titans, and Flash, and the Tales from the Corps specials and the Blackest Night series itself. Plus, there are all the “resuurected titles” that came back for one issue with Black Lanterns, like Catwoman and Weird Western Tales. Then there are issues of comics DC already has released issues of, particularly Green Lantern and Green Lantern Corps, but also Justice League of America, Superman/Batman, Green Arrow and Starman (a resurrected title). And finally, there are the titles DC hadn’t yet released any issues of, such as Booster Gold, Secret Six, Doom Patrol, Outsiders, Adventure Comics and R.E.B.E.L.S.

On the store, these are all available behind the button for Blackest Night. None of the crossover issues – not even the various Green Lantern books -- can yet be found under their own titles. I expect this will change soon, but the key is for Comixology to figure out a way to track regular titles through crossover storylines. Until then, it seems that the comics have to be files under one or the other.

Moving on to the regular releases, there were a few conclusions in the last weeks. War of the Supermen concluded last week, as did The Death of Superman – and DC didn’t continue with Funeral For a Friend and World Without a Superman this week, so they’re taking a little break. Sleeper Season One concludes this week, but hopefully Season Two is right around the corner.

Meanwhile, there were some interesting debuts. Last week saw the debut of Jeff Parker and Tom Fowler’s well-received miniseries Mysterius the Unfathomable at Wildstorm, and this week the imprint released the first three issues of World of Warcraft, and a free 0 issue. 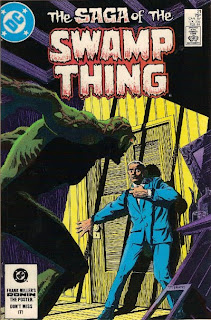 Last week the DCU released the first two issues of Alan Moore’s Swamp Thing run, following them up with another two this week. Incidentally, these pre-Crisis issues from 2004 are the oldest comics DC has released to date. DC also released issues 1 through 3 of Brad Meltzer’s Justice League series (following it with a 4th this week); a few issues of The Lightning Saga had already been released. But DC’s big move last week was a 12 issue drop of Green Lantern comics, with 5 issues of GL and 7 of GLC closing up the gap before the Sinestro Corps War… just in time to see another gap open between their most recent regularly released issues and the later Blackest Night crossovers.

This week, DC’s big debut are the first three issues of Brightest Day – released at $1.99, not the $2.99 that the day-and-date issues of it’s fellow biweekly series, Generation Lost. As for secret origins, DC released Dr. Light last week (ick), and Black Lightning this week.

Otherwise, things keep moving along as they have been, with all the regularly running series getting new issues. A couple interesting speedups: Ex Machina gets both a regular issue and a special this week, and 100 Bullets also logs two issues instead of its usual one. Meanwhile, poor, neglected Victorian Undead still hasn’t released its final issue.

Overall, DC released 186 comics in the last two weeks. As Anton Arcane might say: Not too shabby, Abby.

Comment by Travis Herrick (Modular Mod) on December 2, 2010 at 10:02am
Wow, it seems very weird they haven't wrapped up Victorian Undead yet.

Because I am too lazy to look, how far along is Ex Machina? and 100 Bullets?

Comment by Rob Staeger (Grodd Mod) on December 2, 2010 at 11:13am
Ex Machina is at issue 20, and the first of four specials. 33 issues to go! And yeah, the Victorian Undead situation is weird; I wonder if it's an oversight.