Nay 8, 2012 -- When DC Comics re-launched its entire superhero line last September as “The New 52,” it put its best foot forward with Justice League #1. Now they’re doing it again with the first “New 52” collections, beginning with Justice League Vol. 1: The Origin ($24.99).

Origin collects the first six issues of Justice League, set five years ago and depicting how Aquaman, Batman, Cyborg, Flash, Green Lantern, Superman and Wonder Woman first met. That alone makes Origin a landmark event in comics, but what launches Origin into the stratosphere is its legendary creative team: Chief Creative Officer Geoff Johns, who wrote it, and Co-Publisher Jim Lee, who drew it. 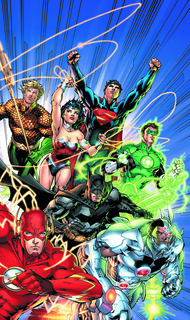 Of course, the Justice League isn’t new – it’s existed since 1960. So when DC re-launched its superhero universe, Johns had to decide what parts of the “old 52” Justice League he would keep, and what to scrape away.

“The core is obviously the big characters – Superman, Batman, Wonder Woman – that core roster of the most well-known superheroes that DC has,” Johns said in an interview. “That, of course, was going to stay. And then I read the original origins of the League, and Jim and I spoke, and we said that if there’s a villain the League is going to fight for the very first time, that brings them together, it’s going to be Darkseid.”

That would be the mad god of Apokolips, an enormously powerful entity who invades Earth to enslave its population. The brand-new superheroes of Earth rise to meet him, although they haven’t yet met each other, and don’t really get along when they do.

The League’s various earlier origins have usually involved invasions, too, one one of them by a gigantic, one-eyed, alien starfish named Starro the Conqueror. But don’t worry, Johns said, those League adventures still happened.

“They still fought Starro,” Johns laughed, “but we wanted someone [for Origin] with two eyes.”

Another change is the replacement of Martian Manhunter as a founding member with Cyborg (of the Teen Titans in the “old 52”). That gives the team a bit more diversity – Cyborg is a black teenager – but Johns says it’s more than that.

Cyborg’s high-tech aspect “really helps the team feel more modern,” and makes the character “integral to the team.” Plus, thanks to the Teen Titans cartoon, Cyborg is “pretty well-known [to the] general public.” And finally, Johns said, adding Cyborg makes this Justice League origin story unique. “One of the things we didn’t want to do was tell the same story.”

One element of Cyborg will thrill older fans: His new origin involves a lot of the weird science from old DC comics. In The New 52, a lot of DC’s mad scientists have a common origin, working with found technology from Apokolips and elsewhere, which we’ll learn more about as early as Free Comic Book Day on May 5.

“That’s a big part of where the book’s going,” Johns said enthusiastically. “I think there’s a lot of cool things that grow out of this, like mentioning Professor Ivo [who created Amazo], Will Magnus [Metal Men], having S.T.A.R. Labs be this place where a lot of these people once worked when all this stuff was going on, and crazy technology was being discovered and found and recovered and analyzed and used and tapped, [and] that this invasion of Darkseid really started this whole movement of high-tech stuff.”

But perhaps the biggest change is that the Justice League will be more human than ever before.

“One of themes of our books is that they’re not gods,” Johns said. “They’re the Justice League, and that although there’s a perception they’re gods, they’re really people. Although you could equate them that way, we’ll see we’ll be dealing more with their humanity than their god-like status. … They have problems and personality quirks and issues and strengths and weaknesses just like us and so that’ll be explored, that’ll be the core of the book.”

So Origin is different from its predecessors in a lot of important ways. But one thing that hasn’t changed is that Justice League remains a big-concept book where the action is turned up to 11. It’s “an action-driven book with a lot of character and heart and humor and [big] stakes,” Johns said. “A comic-book comic book, embracing all the superhero stuff that I think makes superheroes great, and trying to do it on as big a scale as you can with Jim Lee.”

Which makes Justice League: Origin not just important if you like comics, but essential.

I know the hardcover is out already ... I wonder if DC is still going to wait a year to release a tpb like they have done so many times in the past few years.