Sept. 20, 2011 -- DC Comics is in the third week of re-launching all 52 of its superhero titles in a single month, and it’s reportedly going big guns. But DC editor-in-chief Bob Harras is already thinking long term. 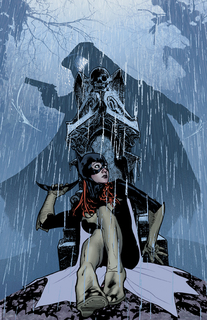 “I think the [52] first issues really are setting the groundwork but we’re building from there with every issue,” Harras said in an interview. “The goal is definitely to keep readers excited and really kind of getting back to that sense of ‘What’s gonna happen next?’ … We’re really just building the base of excitement.”

Not that he’s got his eye so fixed on the big picture that he hasn’t noticed how big September has been.

“Am I happy that the numbers are good?” he said. “Yes, of course. But I really, really – again, not to sound corny – I’m excited more about the sense of excitement about what [the creators] are doing.”

Initial sales reports on The New 52 are huge, with Action Comics #1 alone already hovering around 200,000 before re-orders and foreign sales have come in. Bob Wayne, DC Comics Senior Vice President of Sales, told ICv2.com Sept. 12 “we have sold out of everything that has gone on sale so far, and everything that is going to go on sale next week.” And major titles like Batman #1, Superman #1 and Wonder Woman #1 are still in the pipeline.

“Readers anywhere interested in comics … can have access to our product on their iPads, on their phones,” he said. Some potential readers don’t live near comic shops, so “that they have the ability to get a comic in their home in the middle of the night is just incredibly important. It’s offering a wider audience the chance to come aboard and read our material and see our characters.”

And when that potential new reader buys that first comic book, online or in print, he won’t have to have a degree in comics already. “We’re looking at our books and making sure as best as we can that when a reader does read it the first time, there’s enough information there they won’t be confused,” Harras said.

Something else Harras thinks is important is bringing long-running character back to what made them popular in the first place – a back-to-basics approach that dovetails with what the general populace knows about them.

One such instance is Batgirl, a surprise hit written by fan favorite Gail Simone. The original Barbara Gordon (the Gotham Police commissioner’s daughter) is back under the cowl, after having been sidelined by an injury since 1988. Since then, at least two other women have served as Batgirl, whose fates have not yet been revealed.

“It’s going back to the core of who Batgirl should be,” Harras said. “I think people are reacting to that … I think Gail reacted to that, you get something really great out of that. … It’s part of the mythos. It’s part of our job to keep that mythos fresh.”

Another restoration work is Superman, whose early days are being re-told in Action by Scottish writer Grant Morrison – whose recent book Supergods shows he has probably thought harder and deeper about American pop culture than most Americans.

“I think Grant always wanted to go back to a sense of what Superman was initially,” Harras said. “He was a little bit of a scrapper back in the day. …  I kinda like what Grant has done, where you get this sense of, you know, Clark has rough edges. Clark is a little angry. He’s … finding his way in the world.  … Clark’s in his early 20s, and in your early 20s you’re going through a lot, and if you’re Clark Kent and you have these powers, you’re going through even more than normal, and what would your reaction be?”

But as editor-in-chief, Harras’s brief is the big picture. Where does he want to be in six months?

“Aruba,” he laughs. “Where I want us to be, I still want to still have that sense of excitement out there. I want fans and readers in general to be coming back every month saying, ‘Tell me another story about these characters.’ We want to actually show people out there that DC Comics and the characters here are amazing characters and we will be telling you compelling and amazing stories about them. It’s all about excitement and entertainment, and that’s what we want to be doing, and that’s what we are going to be doing.”