June 2, 2009 -- DC Comics is undergoing something of a superhero renaissance of late, which is reflected in a host of terrific collections in my Teetering Tower of Revew Stuff:

* The history leading up to Final Crisis ($29.99, by Grant Morrison, J.G. Jones and Doug Mahnke) is a long, strange trip – as is the book itself.

Short history: DC’s superhero books have a tradition dating back to 1963 of an annual crisis of some sort, generally in the summer, bringing together its biggest stars for a huge adventure (or if you’re cynical, a huge sales event). Last year, the Powers That Be determined that 2008 would be the last: a Final Crisis. 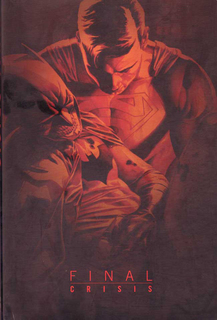 Tapped to write it is one of the amazing writers of our generation. Grant Morrison thinks laterally, and has an encyclopedic knowledge of DC’s publishing history. The result in this case is a crisis that stretches from the first boy on earth (Anthro, a short-lived caveman book of the ‘60s) to the last one (Kamandi, a ‘70s book set in a dystopic future run by animals). In between we’ve got a giddy adventure involving the transition from the “Fourth World” of gods to the Fifth, the return of the most famous Flash from the dead, the triumph of the anti-life equation, a trip to the “overvoid” involving 4-D Vision, the death of Batman (sorta), Japanese cosplay, the land of canceled characters, an army of transdimensional Supermen and the end of the world.

Actually, the sheer comic-booky breathlessness of this journey has engendered some criticism; some fans say Final Crisis is incoherent. I disagree. I just think it’s such a dense story that it’s difficult to ingest with one swallow. Morrison doesn’t slow down to explain much, which means the reader has to work harder than usual. Frankly, even the Captain was occasionally overwhelmed by the relentless story pace, explosion of ideas, lateral connection between points of comic-book trivia and dreamlike slips into metafiction narrative.

But I don’t have any trouble with the concept of working harder to enjoy a story, and the Final Crisis hardback makes it a tad easier by collecting the seven-issue miniseries, the two issues of Superman Beyond, and Final Crisis: Submit. And if it requires more than one reading, says I, then you just got more for your money.

Johns has become famous for a trilogy of miracle revamps, including the Justice Society of America and Hawkman. These concepts had become so mired in contradictory continuity that they had become radioactive. Yet Johns smoothly flipped all those problems into their own solutions, and the JSA and the Winged Wonder are successful concepts once again.

He did the same with the most famous Green Lantern, Hal Jordan. Previous regimes had left Jordan A) a psychotic mass murderer, B) replaced and C) dead. Most considered the character unsalvageable.

Not Johns, though, who engineered a plausible and satisfying revamp in Green Lantern: Rebirth. Not satisfied with that, he also explained much of the storytelling conventions of the 1960s as vital elements of the re-energized Green Lantern franchise. And not content there, he re-imagined Jordan’s origin, supplying new explanations, plausible motivations and more information to bring a ‘60s story into the present.

That story is collected in the Green Lantern: Secret Origin hardback, and it really should be on your bookshelf.

* That Johns guy is back in Superman: New Krypton ($24.99, with James Robinson and various artists). This hardback collects six recent issues from Superman, Action Comics and Supergirl, which sets up the next year’s worth of Super-stories in all three Super-books.

As such, it’s really only the beginning of the story. But it’s quite a beginning, with the arrival of 100,000 Kryptonians (enlarged from Kandor), the death of Doomsday, Jimmy Olsen’s first big scoop, the return of the 1940s Guardian and the introduction of new Kandorian crimebusters in old names, Nightwing and Flamebird.

It’s a little choppy, too, as some information comes from issues not included. But readers can get the gist. And they might want to hang on to this book for the next year, as Guardian, Nightwing, Flamebird and the Kandorians – plus Mon-El and the new Superwoman, coming in the next collection – take center stage for 2009.

Comment by CBjedi on June 5, 2009 at 8:47pm
DC has reignited my interests with JSA. These are the kinds of stories and heros I grew up with.