Actually, I was quite impressed with the posters who chimed in with responses.  Out of all ten questions, only one wasn’t correctly answered.  At least, not with the absolutely, positively proper answer.  However, even that one was kinda sorta gotten right.  I’ll speak more on that anon.

First off, kudos to Philip Portelli.  He provided the highest number of correct responses, and he nailed some of the toughest ones on the quiz.  Jeff of Earth-J also submitted the right answer to one of the tougher posers.  One particular question I loaded with a couple of traps, and Prince Hal was the only one to evade them and provide the correct info. 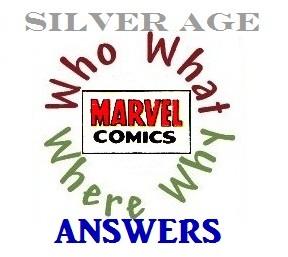 I rather enjoyed Figserello’s advice to the unwary, by pointing out a couple of questions in which the answers seemed too obvious.  And he was right on both counts!  I don’t have a problem with this kind of kibitzing, by the way.  It helps get everyone more involved with finding the solutions.

And now, all of you can unbate your breath because here come the answers!

The answer is . . . Johnny (the Human Torch) Storm and Jean (Marvel Girl) Grey!  Johnny enrolled at Metro College in Fantastic Four # 33 (Feb., 1965).  While he hung around the campus long enough to make friends with football star Wyatt Wingfoot, his classroom attendance was rather spotty.  He was still a student there, at least officially, when Jean Grey arrived at Metro in The X-Men # 24 (Sep., 1966), as the dialogue from her first day makes clear.  The two youthful super-heroes never bumped into each other in the student union, though. 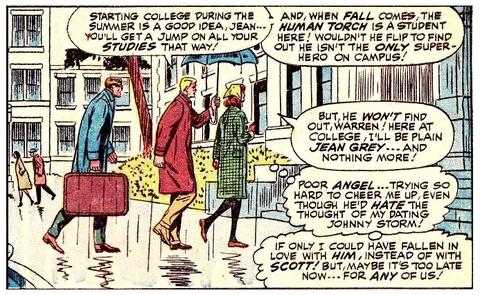 Philip nailed this one right off.  The answer is . . . Eric Koënig!   Koënig was a junior officer and a pilot in the German Luftwaffe when he first appeared in Sgt. Fury # 27 (Feb., 1966).  After getting a good look at the seamy underbelly of the Nazi regime, Koënig defected to England, where he turned in his swastika.  Eric officially joined the Howling Commandos in Sgt. Fury # 35 (Oct., 1966).

Anytime you see a military-oriented question from me, you can bet it’s going to be tricky, like this one was.  But it wasn’t as sneaky as my other question in this quiz about the Marvel military.

3.  On her twenty-third birthday, Janet (the Wasp) van Dyne received her complete inheritance.  How much money did her father leave her? 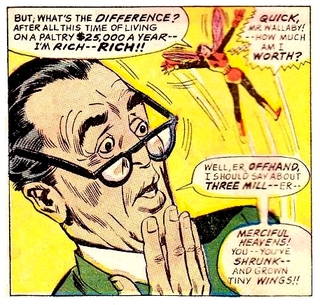 The answer is . . . Willie Lumpkin!  Postman Willie Lumpkin, whose route included the Baxter Building and the offices of the Fantastic Four, first appeared in Fantastic Four # 11 (Feb., 1963).  He became a popular background character, showing up sporadically over the course of the series.

In a sense, though, Willie predated the F.F.  In 1960, Marvel editor Stan Lee and artist Dan DeCarlo created the syndicated comic strip “Willie Lumpkin”, the eponymous star being a letter carrier for the U.S. Post Office.  If you were around then, you still might have missed it, if you blinked a couple of times, because the strip lasted only about a year.

As related by Stan Lee in an interview with Roy Thomas, when he needed a mailman to set the scene for “A Visit with the Fantastic Four”, from FF # 11, he named the character “Willie Lumpkin”, as an in-joke nod to the old strip.

(Many thanks to Brian Cronin’s always-excellent “Comic Book Legends Revealed”, the place where I discovered this fun bit of trivia.)

Yeah, I got sneaky with this one, on a couple of levels.

The natural answer, as Figserello pointed out, would be the United States Air Force.  That’s what Marvel’s biography of Ben Grimm has insisted for the past couple of decades.  But this was a Silver-Age quiz, remember?  And in the Silver Age, Grimm was a veteran of World War II, which ended in 1945.  And the U.S. Air Force did not exist as a service until 1948.

Philip Portelli was canny enough to remember this.  Which is why he replied the Army Air Corps.  Which was also wrong---for two reasons.

Even so, I wouldn’t have dunned Philip on that kind of technicality.  Philip got that one wrong because Ben Grimm wasn’t an Army pilot.  The answer is . . . he was an aviator in the United States Marine Corps.  This was established in Fantastic Four # 11 and strongly iterated in the tale “Objective:  Ben Grimm”, from Captain Savage and His Leatherneck Raiders # 7 (Oct., 1968).

I didn’t fool Prince Hal, though. 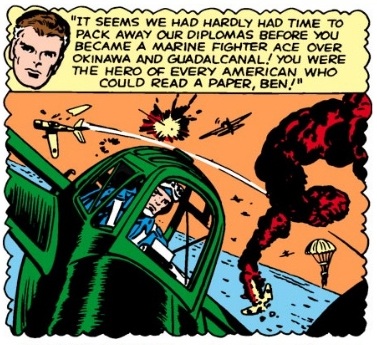 The answer is . . . Harkov!  When Major Astro landed on a planet in the Alpha Centauri solar system and emerged from his spaceship, in Marvel Super-Heroes # 18 (Jan., 1968), he learnt from the welcoming committee of Earth descendants that his thousand-year trip had been for nothing, thanks to faster-than-light travel made possible by Harkovian physics.  Aw, man . . . . 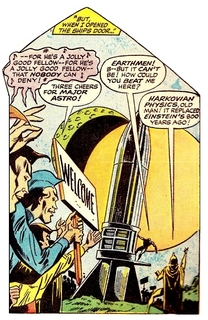 The answer is . . . “(The New Iron Man) Meets the Angel”, from Tales of Suspense # 49 (Jan., 1964).  As Philip pointed out, the appearance of the Avengers in this story is symbolic, except that it does show the whereabouts of the Hulk, Thor, Giant-Man, and the Wasp.  And, of course, Iron Man stars in the tale.

I really wanted to use this as a question, because “Meets the Angel” marks the only time when the original Avengers is then-contemporaneously depicted in any title other than The Avengers.  Even so, there’s a rub.  By the time of “Meets the Angel”, Iron Man had discarded his clunky, all-gold armour for the streamlined red-and-gold outfit.  Yet, as seen in The Avengers # 2 (Nov., 1963), the Hulk had quit the group before Iron Man’s upgrade.

It’s a wrinkle difficult to . . . ahem . . . iron out, since the story clearly treats the Emerald Behemoth as still being a member of the group.  This discrepancy, like so many others, can probably be attributed to the fact that, at the time, Stan Lee was writing virtually every story that appeared in a Marvel comic and no doubt, details got kind of fuzzy. 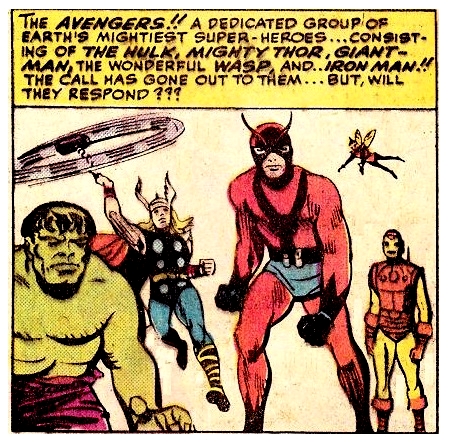 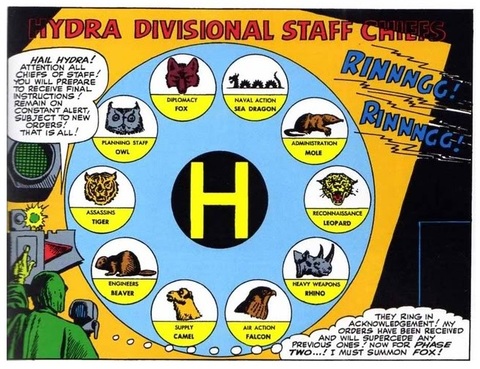 The answer is . . . because Merlin thought that John F. Kennedy was too young to be the ruler of a nation!  (So did some of the people who hadn’t voted for him.)  You can see for yourself in “Defying the Magic of Mad Merlin”, from Journey Into Mystery # 96 (Sep., 1963). Upon careful consideration, I realise that, in the question, I should have asked for the name of the material.  Because I failed to be that specific, I have to make some allowance for descriptive answers.  On the basis of that, I’m awarding Philip Portelli half-credit for his response of a “special stretch fabric”, since morphon itself is described as “capable of almost infinite stretching.”

On the other hand, I cannot give credit for the answer of “unstable molecules”, since that description was never applied to Hank Pym’s costumes in the Silver Age. 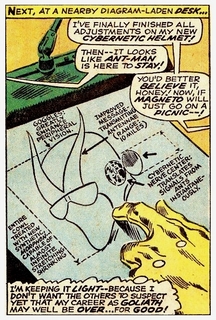 Looking at the final tallies, no-one who posted answers came up whiffing it completely.  Prince Hal scored with the devious Ben Grimm question.  Jeff of Earth-J was correct in the two---# 3 and # 8---that he answered.  And even Figserello, who chose to respond in a humourous vein, got the Willie Lumpkin poser.

Nice work on the challenge as well Commander. Informative as always!

And thanks for a fun and entertaining quiz, Commander!

Thanks for the praise though it seems a bit undeserved as a little more research would have been prudent! Just lazy, I guess but I always like going with my gut feeling on these quizes.

Point of fact, Avengers #45 had someone in the crowd say the Wasp inherited $5 million so I took that as fact instead of looking for an earlier issue. But really $3 million as a big deal! A .500 pitcher can get that a year easy! Yes I know it's the 60s but still that hardly made her Rockefeller!

Ben Grimm was a Marine! D'oh!! And I could have looked that up as easy as everything else but I remember him and Fury as wartime buddies so...

The Camel. Sheesh! I know more about Sgt Fury than Agent Fury so I definitely got to read more SHIELD stories!

And a mini-protest ;-) Avengers #28, the first appearance of Goliath, clearly says his costume was made a "special stretch fabric" that he left behind. Morphon is a retcon, in my eyes! *clearly clutching at straws here. I want a 70%-a passing grade!*

A great, great quiz, Commander! Try an all-Legion one next!

" But really $3 million as a big deal! A .500 pitcher can get that a year easy! Yes I know it's the 60s but still that hardly made her Rockefeller!"

Very tough quiz; I didn't know any of them off the top of my head although I knew where to look for the Hydra question and Jan's inheritance. I would have gotten half of #1 (knew Johnny attended Metro), and would have guessed (wrongly) that Ben Grimm was a Navy pilot.

You can, sort of, understand the Wasp's joy at the shackles coming off. 25K is less than one per cent of three million; her trustees could have paid out that allowance with the interest alone. (Unless banks offered a really, really crummy rate back in the '60s.)

Very challenging quiz, Commander, the only answer I knew was the one about Merlin and Kennedy.

Comment by Figserello on June 28, 2011 at 4:48am
Hadn't Merlin been there when Arthur became King of the Britons by pulling the sword out of the stone?  In most of the stories he was still in short trousers when he did that...

But the Mad Merlin wasn't the real Merlin. He later appeared in X-Men as the Warlock, the Maha Yogi in Incredible Hulk, fighting Doctor Druid as well as Ol' Jade Jaws and finally as Merlin Demonspawn in Peter David's Captain Marvel.

Trust me, if Johnny Storm saw Jean Grey at college, he would have gone more!