Even minor comics turn into movies these days

Hollywood is raiding comics for ideas so much these days that even obscure properties are making it to the big screen. Two such are in theaters now.

Bullet to the Head, based on the French graphic novel Headshot, premiered Feb. 1 and stars Sylvester Stallone. From the trailers – I haven’t seen the movie, nor do I intend to – Bullet looks to be a typical Stallone vehicle, with big set-pieces full of explosions and snarky one-liners. (“You can’t just shoot a guy like that!” “I just did.”) 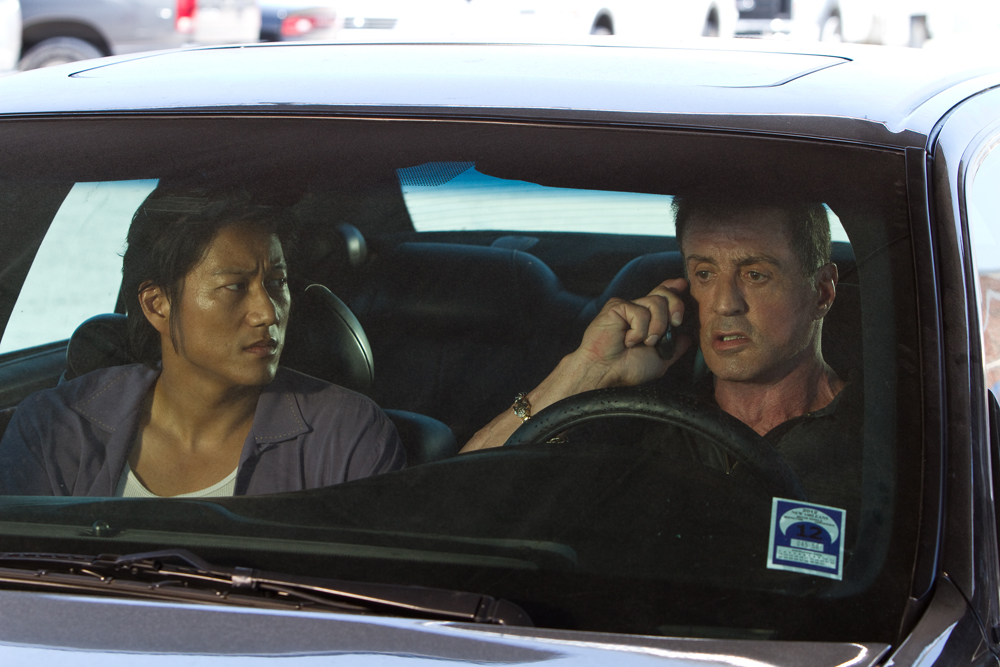 If I’m interpreting those trailers correctly, the high concept of the movie seems to be that a hit man (Stallone) teams up with a cop for revenge after both characters’ partners have been killed by the same people. That does, in fact, happen in Headshot – but only in the latter third of the story. I’m guessing the movie skips over the first two-thirds to get right to “Strange Bedfellows Team-Up.”

Which is a shame, since the first two-thirds of the graphic novel are a darn good read. We get to know the dead partners pretty well, and some of the dialogue between the two hit-men borders on Pulp Fiction brilliance. There’s political intrigue, double- and triple-crosses, upscale hookers and, just to get your blood boiling, cruelty to animals. But it’s the fact that we get to know and like the partners that makes it so shocking when they are killed – and helps the reader understand what fuels the fury in the remaining characters. Without that characterization, the last part of the graphic novel would simply be a one-note, cartoon revenge fantasy – in other words, a typical Stallone movie.

Dynamite Entertainment has published Headshot in the U.S. under the title (what else?) Bullet to the Head ($19.99). Thankfully it’s the original story, and not an adaptation of the film. It’s written by Alexis “Matz” Nolent, who also writes the engrossing The Killer series (printed in America by Archaia), and he certainly knows his hit-man stuff.  (Matz is French, but don’t worry, Headshot is set in the U.S.) The art is by Aussie Colin Wilson in an attractive style that reflects both American and European influences.

So, unless you’re just a big Stallone fan, I suggest you skip the movie and read the graphic novel. But then, I would say that, wouldn’t I?

The second movie is Parker, which premiered Jan. 25 and stars Jason Statham. It’s based on novels by Donald Westlake, writing as Richard Stark, which are currently being adapted to graphic novels.

Parker loosely adapts The Hunter, the first novel featuring a career criminal the underworld refers to only as Parker. (It’s implied in the novels that Parker is an alias, and he’s never given a first name.) The movie depicts Parker going after “colleagues” who betrayed him and left him for dead during a heist, which is the plot of the book. However, the movie co-stars Jennifer Lopez as an ally in his mission, a character who doesn’t even exist in the books, nor would the literary Parker trust any partner (of any gender). So when I say “loosely adapts,” I’m not kidding!

Further, the Parker in the movie seems to have a code of ethics, and again, that’s not found in the books. Parker really doesn’t have any redeeming qualities, except for professionalism. And since he’s a professional crook, I’m not sure that counts. Also, the novel is set in the present, and most Parker novels are set in the ‘50s and ‘60s – and even when they’re not, they still have that Cold War vibe.

Now, if the plot of Parker sounds familiar, it’s because The Hunter has been adapted to film twice before – although in both prior incarnations, Parker was called something else. Lee Marvin starred as Walker in Point Blank (1967), and Mel Gibson was named Porter in Payback (1999). Other Parker novels have been adapted to movies as well, but – weirdly – the Parker character is always called something other than Parker. Look for Jim Brown as McClain in The Split (1968), Robert Duvall as Macklin in The Outfit (1973), Peter Coyote as Stone in Slayground (1983) and even Anna Karina as a female Parker named Paula Nelson in the French Made in U.S.A. (1966)!

The Parker novels are relatively successful – Westlake wrote 24 of them – so maybe it was inevitable that they’d be adapted to comics. But who knew they’d be so good?

Writer/artist Darwyn Cooke, famed for period stories like DC’s New Frontier, has adapted three Parker novels so far, and they are chock-full of Sputnik-era style. I confess I’ve never read the Parker novels, and now I don’t need to. After Cooke’s adaptation of The Hunter (IDW, $24.99), I’ve anticipated each new adaptation with ravenous hunger. I’ve since devoured The Outfit and The Score, and will snatch up whatever Cooke does next.

And, hey, maybe I’ll even go see the movie – it doesn’t really have Parker, but it does have J-Lo. And there’s always room for J-Lo!

I agree. For one thing, it looks like the movie is set in the present, and part of what I love about Cooke's work is his mastery at presenting the early 1960s. I was alive then, and he really nails it.

I haven't seen Parker, but I was so disappointed that this version looks like just some generic action/crime movie. I think the comics have spoiled me on what I want the movie to be, and this isn't it.

Peter Wrexham replied to Steve W's discussion A Cover a Day
"Here's another chess-playing robot, but this one is playing against Robin rather than…"
49 minutes ago

Jeff of Earth-J replied to Jeff of Earth-J's discussion DC's 1st Issue Specials
""But where did Norman Lear get it?" He (or perhaps his father) possible coined that…"
2 hours ago

Dave Palmer replied to Steve W's discussion A Cover a Day
"The Challengers of the Unknown vs. some robots. Multi-Woman Kra, King of the Robots The…"
3 hours ago

The Baron replied to The Baron's discussion Movies I Have Seen Lately
"So how does Jim Corrigan fit into all this?"
3 hours ago

Jeff of Earth-J replied to The Baron's discussion Movies I Have Seen Lately
"SPECTRE: This movie reveals that a group known as Spectre (not an acronym this time, but updated…"
3 hours ago

The Baron replied to Cavaliere (moderator emeritus)'s discussion What are you eating and/or drinking right now?
"I haven't had any alcohol since before COVID, so at least two years, probably more like three.…"
3 hours ago

Jeff of Earth-J replied to Cavaliere (moderator emeritus)'s discussion What are you eating and/or drinking right now?
"I stopped drinking alcohol of any kind since my last doctor visit in August... not forever, just…"
4 hours ago

Jeff of Earth-J replied to Cavaliere (moderator emeritus)'s discussion What are you watching right now?
"While the adults were watching Sandman over Thanksgiving, the kids were in the other room watching…"
4 hours ago

Jeff of Earth-J replied to Steve W's discussion A Cover a Day
"Confusing him with this guy, perhaps...?"
4 hours ago

The Baron replied to Steve W's discussion A Cover a Day
"They spelled "Ronin" wrong."
4 hours ago