Nov. 2, 2010 -- Halloween is over, but there’s still a lot of scare fare in the Teetering Tower of Review Stuff.

Four Color Fear: Forgotten Horror Comics of the 1950s (Fantagraphics, $29.99) tops the pile, a collection of off-brand (and probably public domain) comics from before the Comics Code of 1954 (which effectively neutralized the horror genre and infantilized the medium). This book will be intoxicating to comics fans, and just a hoot for casual readers. 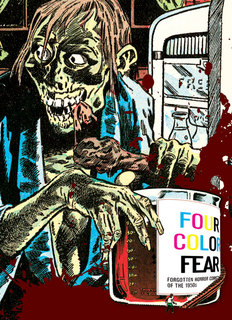 I suspect that most horror comics were pretty bad even before the Code – bad in the quality sense, not the gory sense (although there was that, too). But you wouldn’t know it by this book, which contains the crème de la blood from the wacky, unrestrained Halloween party that was pre-Code horror comics. Editor Greg Sadowski assembles a lot of famous names here (Jack “Plastic Man” Cole, Joe “Sgt. Rock” Kubert, Basil “Lena the Hyena” Wolverton), artists that later became famous at the legendary EC Comics (Reed Crandall, George Evans, Al Williamson) and guys who were very good at aping EC Comics (Sid Jacobson, Howard Nostrand) or aping Will “The Spirit” Eisner (the Iger studio).

Speaking of EC, you won’t see any stories from that publisher here, nor will you see any from Timely/Atlas (later Marvel Comics, which may have published as much as 50 percent of the total) or anything by the unique Steve Ditko. Given the book’s title I didn’t expect any, because those stories are the most famous – hardly “forgotten” – and are readily available elsewhere. Even so, I’m impressed with Sadowski’s academic thoroughness, as he acknowledges their omission, explains why and then points to where they can be found.

My only complaint is that Sadowski’s copious notes are not included with each story individually, but are instead collected in the back, forcing a lot of flipping back and forth. Still, the stories stand alone just fine without the notes, which are not always about a specific story, but instead are often general information or quotes from 1950s artists. That should still be welcome to both fans and historians, as so little has been written about non-EC, non-Atlas, non-Ditko 1950s comics. 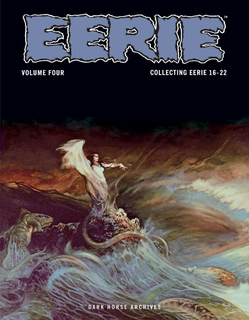 In fact, everything about this book is welcome. What a delight to immerse one’s self in the pop culture Id of the 1950s, where technology and social mores were so different – while people, in all their petty evil, were exactly the same. Funnier still is to consider how these stories, tame by today’s standards, could have caused such an uproar in that simpler, buttoned-down past.

Meanwhile, Dark Horse’s series collecting Warren Publishing’s Eerie magazine is up to volume 4, which reprints issues from the late 1960s – when Warren’s books were at their weakest. The art and stories are mostly by second-raters. But the editing is what annoys this ink-stained wretch the most, as it became simply atrocious after Archie Goodwin quit as editor around 1966. Replacement Bill Parente routinely allowed serious misspellings (“Suspence” on a cover blurb, for heaven’s sake), content errors (“the smell of sulfur and brimstone,” which even novice horror readers know is the same thing), erroneous homophones, jarring malapropisms– honestly, this level of incompetence wouldn’t fly at a weekly newspaper. 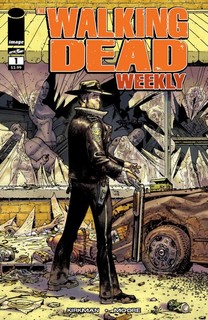 But if you’re not a copy editor – and given the awful spelling and grammar I see online – most readers may not care as much as me. If so, then Eerie Vol. 4 ($49.99) may be worthwhile, mainly for the (very) few stories by accomplished pros Goodwin, Crandall, Ernie Colon and Tom Sutton.

Moving to the modern day, the first episode of AMC’s adaptation of Image Comics’ The Walking Dead Oct. 31 was top flight. I’m not usually a big zombie fan, but writer Robert Kirkman’s tale of survival after the apocalypse has compelling characters and intriguing storylines, punctuated by random moments of genuine horror. With some additions, Kirkman’s tale has made the transition to the small screen intact, and I have high hopes for it.

So does Image Comics, which will be reprinting the original (and still ongoing) series as The Walking Dead Weekly, with an issue each Wednesday for $2.99 beginning Jan. 5. If you’re in a hurry, the Walking Dead Omnibus Vol. 3 ($100) reprints issues #49-72 (so you’ll have to pick up the first two Omniboo for the entire story). As the description notes, the Omnibus is big – big enough to use as a weapon against pesky zombies.
Contact Andrew A. Smith of the Memphis Commercial Appeal at capncomics@aol.com.

Comment by Jeff of Earth-J on November 8, 2010 at 8:38am
How come nobody notices that Moore stole the origin of Dr. Manhattan from Dr. Solar?

Wasn't Dr. Manhatten more closely based on the origin of Charlton's Captain Atom?

There were two more things I forgot to mention about Four Color Fear last week. First, there is that great glossy color cover section. (The superhero version didn't have that!) Second, regarding the endnotes, for both volumes I employed a "double bookmark system" for ease of flipping back and forth.

Comment by George on November 7, 2010 at 1:17am
Moore isn't the only Outer Limits freak out there. How about James Cameron? "The Terminator" bears suspicious similarities to two O.L. episodes written by Harlan Ellison: "Soldier" and "Demon with a Glass Hand."

So suspicious, in fact, that after Harlan's lawyers got through, video and DVD copies of "The Terminator" included the credit: "Acknowledgment to the works of Harlan Ellison."

Comment by Cavaliere (moderator emeritus) on November 7, 2010 at 1:02am
Because Moore is o-o-oh so brilliant and every single thing he does is an independent stroke of genius.

I'm one of those weirdos who doesn't worship at the altar of Alan Moore. I like Watchmen. I love V for Vendetta. But a lot of his stuff just leaves me cold.

Comment by Captain Comics on November 7, 2010 at 12:56am
How come nobody notices that Moore stole the origin of Dr. Manhattan from Dr. Solar? :)

More on that episode.

Also of interest to comics fans -- the allegations that Alan Moore swiped the plot of "Watchman" from a 1963 Outer Limits episode, "The Architects of Fear." I think Moore acknowledged he may have unconsciously borrowed from it. Maybe that's why, near the end of the Watchmen movie, the camera dwells on a TV screen showing the opening of Outer Limits ("Do not adjust your TV set ... WE are controlling the sound and the picture ...")

Comment by Captain Comics on November 6, 2010 at 11:59pm
I didn't know that, George! I watched Outer Limits as a kid, but of course at that time I wouldn't have known Adam Link from ... er, you know. The other Adam.

For those who reacted with alarm to the Outer Limits title, one of the original Adam Link stories was indeed titled "I, Robot." This would be in 1939 or 1940, far predating the later, better-known Isaac Asimov story of the same name. I assume the Outer Limits show adapted the original "I, Robot" -- or conflated several Adam Link stories under that name.

Does anyone know if the Adam Link prose stories are in print anywhere? I would imagine there would be some difficulty with the "I, Robot" name, since "confusion in the marketplace" is the very definition of trademark infringement. I'd be curious to see how they got around it (if they did).

Adam Link appeared in a 1964 Outer Limits episode called "I, Robot," which had Leonard Nimoy in the cast (though not as Adam). It's on DVD.

Comment by Jeff of Earth-J on November 5, 2010 at 3:08pm
Four Color Fear: I brought this home a couple of weeks ago with the intention of putting it at the top of my reading list, only to have it snatched immediately from my possession by my wife. It’s funny: Tracy will not watch horror movies, but she absolutely devours all of my horror comics (not literally, of course), especially anything by EC and Warren. Speaking of which…

Eerie, Vol. 4: I think I mentioned before that I’ve allowed myself to fall behind on Creepy and Eerie reprints because, as succinctly expressed by Other-Jeff, “The stories just weren’t very good.” Tracy reads ‘em, though, complaining all the way through that they aren’t as good as EC. There’s a reason I continue to buy them, though, and Other Jeff summed that up as well: “Wonderful, amazing art for the most part.” The art is definitely better than the stories. But as Cap pointed out, these titles took an obvious and distinct dip in quality after the departure of Archie Goodwin. My advice to anyone curious about this series is to start with Creepy Vol. 1, like Jeff did. If you don’t like it, fair enough, but if you do and decide to continue, as soon as it starts getting bad don’t wait for it to get better.

Comment by Cavaliere (moderator emeritus) on November 5, 2010 at 2:18am
Goodwin had the writer credits on several and, really, I expected better from him. It was a long, long time ago, though.

Comment by Captain Comics on November 4, 2010 at 11:24pm
Those would be the Adam Link stories, which are mildly famous. Adam Link was originally written by Eando Binder (Otto Binder and his brother, whose name starts with "E", thus E-and-O Binder) in the pulps in the late '30s and early '40s. That was pretty early for self-aware robot stories, predating Asimov and Heinlein and all those guys, which is why I guess Adam Link is well-known in SF circles. But given that they were written by the Binders, that may explain why they were better than the rest -- as you no doubt know, Otto Binder was the main writer on Captain Marvel, and later the a big gun in the Weisinger stable, creating many of the major elements of the Silver Age Superman.

As to the rest, I don't remember who was writing for Warren at the outset. The best stories in Creepy and Eerie were usually by Archie Goodwin, who may not have arrived yet for the first five issues. I'd have to check when I get home (I'm at work).

Lee Houston, Junior replied to Steve W's discussion A Cover a Day
"Running late, again, but anyway... There will be at least as many collections and remembrance…"
1 hour ago

Randy Jackson replied to Randy Jackson's discussion How do the Wakandans mine Vibranium?
"Thanks. I guess that answers my question. "
8 hours ago

Richard Willis replied to Steve W's discussion A Cover a Day
"Another wrap-around. I don't like his Hal Jordan."
8 hours ago

Jeff of Earth-J replied to Steve W's discussion A Cover a Day
"Took down my previous post when I realized it was a dupe. Realized no posted this one yet."
8 hours ago

Philip Portelli replied to Steve W's discussion A Cover a Day
"Supergirl through the years!  (btw & IMO only, I don't think that Dick Giordano was a…"
11 hours ago