'Flash Gordon,' 'Vampi,' other reprints have huge jump in quality 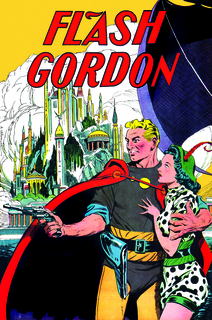 Flash Gordon Comic-Book Archives Volume 1 reprinted all the comic books published about that character from 1947 to 1953, all by Dell Comics and mostly mediocre. But Volume 2 collects the Gordon comic books published by King comics from 1966 to 1967, and is a huge leap forward in quality.

The stories improve greatly with the addition of legendary writer/editor Archie Goodwin. But Flash Gordon has always been more famous for its art than its stories, and King doesn’t disappoint. Volume 2 boasts an all-star lineup, including Dan Barry, Reed Crandall, Ric Estrada, Al Williamson, Wally Wood – even Raymond and Raboy, in the form of occasional reprints from the comic strip.

Since King comics weren’t distributed in my area growing up, this is the first time I’ve seen these hidden gems. I’m delighted to add Flash Gordon Comic-Book Archives Volume 2 ($49.99) to my collection, and to recommend it to other Mongo fans.

Two other books in the running for “most improved reprint series” are Creepy Archives Volume Nine (Dark Horse, $49.99) and Vampirella Archives Volume Two (Dynamite, $49.99). Both Creepy and Vampirella were originally from Warren Publishing, which hit a rough patch in the late 1960s and was forced to use lesser, cheaper, creators. But both of these collections come from the early 1970s, when Warren had recovered and improved.

But before I tell you how good they are, let me indicate how bad they’d gotten. Here’s Publisher Jim Warren himself describing early Vampirella in Comic Book Artist #4 (available online at http://twomorrows.com/comicbookartist/articles/04warren.html):  “The first issue was awful – and the second issue was just as bad. … Suddenly she came alive in the twelfth issue with Archie [Goodwin] writing an entirely new origin. … Now if only there was a way I could wipe out the first 11 issues and erase it from memory.”

That’s a little harsh; Goodwin was writing the Vampirella episodes as early as issue #8, where he began adding a supporting cast, motivations and other elements that turned the strip from an incoherent pun-fest into an actual story. But Warren is right that the strip really took off with issue #12, when Spanish artist Jose Gonzalez came on board.

And it wasn’t just Gonzalez. The early 1970s saw an avalanche of new, talented, hungry artists, and many of them arrived – or debuted – at Warren Publishing. Vampirella #8-14, collected in this volume, featured horror stories by Neal Adams, Frank Brunner, Billy Graham, Jeff Jones, Esteban Maroto, Mike Ploog and Ralph Reese. Add old hands like Wally Wood and Tom Sutton, and these 1970-71 issues of Vampirella are as good as the early Warren years, or maybe even the famous EC Comics that inspired them.

All of that also holds true for Creepy Archives Volume Nine, which collects four issues from 1971-72. But Creepy #42-45 also availed itself of the huge influx of talented Spanish and Filipino artists of the time, as well as some of the new, hot writers of the early ‘70s – Don Glut, Steve Skeates, Jan Strnd and more. It’s worth a look.

* The Dark Knight Archives Volume 7 (DC, $59.99) collects Batman #26-31 from 1945, and I’m sad to say it’s just plain boring. The Dynamic Duo fight various dull, plainclothes crooks in these stories, and if it wasn’t for the humorous shorts starring Alfred the butler, I would have forgotten them already.

* Marvel Masterworks: Atlas Era Battlefield (Marvel, $64.99) reprints all 11 issues of this war book from 1952-53. The usual faults of old war comics are present: vile racial caricatures, implausible combat, infallible Americans. But “Battlefield” was clearly aiming for the high bar set by the famous war books at EC Comics, and sometimes it succeeded. The presence of many artists who would make Marvel famous in the 1960s certainly helps.

* The Occult Files of Doctor Spektor Archives Volume Two (Dark Horse, $49.99) continues the 1970s adventures of a character the editor wanted to be a narrator, and the writer wanted to be an adventurer. This creative tug-of-war is sometimes confusing, but Glut’s stories and the art (by Jesse Santos and others) are both enthusiastic and entertaining.

Comment by Jeff of Earth-J on March 18, 2011 at 8:44am
FLASH GORDON: One of the comics in this collections (#5 I think) is one of my first comics ever, bought in a three-pack along with an issue of The Phantom and Mandrake the Magician. One thing you didn’t mention about the King series is that it seems to be a direct sequel to the Alex Raymond Sundays, picking up almost exactly where Raymond left off. (Aside: Be sure to give that Al Williamson’s Flash Gordon a look, too.)

WARREN: Although Tracy has kept right up with Creepy and Eerie reprint volumes, I have allowed myself to fall behind. I don’t even remember where I left off. (Normally it would be the ones still in the shrink-wrap.) Consequently, I have started over at the beginning with the intention of reading them all. The first time through I was expecting good stories and good art, but my expectations were often not met. This time I know to expect mediocre stories and phenomenal art, and I’m enjoying them much more the seconf time through.

It’s good to know Warren gets over its rough patch and gets better again (which I didn’t know for sure until I read your blog). I patted myself on the back for passing Vampirella volume one after I read your review of it, but now you’ve got me curious about volume two. Maybe when I’m caught up with Creepy and Eerie.

DARK KNIGHT 7: Either this one has been out for a while and I don’t remember buying it (I know I haven’t read it), or I missed one. I’ll have to check.

BATTLEFIELD: This is one on many volumes I’m currently in the middle of reading. I think your comparison to EC comics (as the high bar) was right on the mark. I am finding Battlefield to be much closer in tone and style to Frontline Combat or Two-Fisted Tales than it is to, say, later war comics such as Sgt. Rock or Sgt. Fury. Also, notably, the majority of the Battlefield stories are set against the backdrop of the Korean War, not WWII.

DR. SPECKTOR: This one is sitting on my coffee table waiting to be read. I have at least read the introduction by Don Glut. It’s difficult to imagine, well into the so-called ?Marvel Age of Comics,” that Glut’s editor still had such antiquated ideas about comic book readers.

It IS laughable that Glut's editor -- and Gold Key in general -- had so completely missed the train on what was selling comic books in the Silver Age. Even DC decided to put out ugly comics it didn't understand to try and catch up ...

And, honestly, by the time of the stories in this book, as Glut gleefully points out in the foreword, his editor had basically surrendered to what Glut wanted. He wasn't convinced, mind you -- he was just giving up! So these stories don't really have the creative tug-of-war -- in fact, Spektor is clearly the hero, the stories begin to run full length, and one even continues for a couple of issues. Dr. Spektor begins to resemble a more modern book, So Glut has won.

On the other hand, for reasons unexplained, Dark Horse includes in this volume Spektor stories from the suspense digests that preceded the eponymous series -- stories from back when Spektor was just a narrator. Why these weren't reprinted in the first book I don't know, but their out-of-sequence appearance here continues the confusion.

That was way more information than a general newspaper reader would want to know, so I shorthanded it. But I thought you'd like to know!