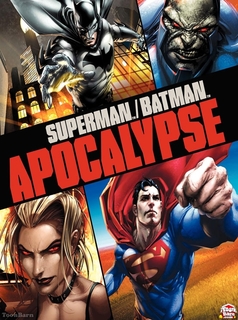 Sept. 28, 2010 -- Superman/Batman: Apocalypse, released this week, is the ninth straight-to-video DC Comics animated movie since the series started in 2008, and one of four in 2010 alone. Comics fans should be cheered by these movies’ fidelity to their source material, but animation fans might want Warner Bros. to slow down and craft them a bit better.

Apocalypse adapts six issues of Superman/Batman from 2004, a story written by Jeph Loeb and drawn by the late Michael Turner that introduced the current version of Supergirl. And, as noted, the comic book moves almost entirely intact to the screen. Not only is every beat of Loeb’s story lifted, but the animators even attempt to mimic Turner’s art style on Supergirl, giving her the artist’s signature long waist and big eyes.

And as stories go, this one is an action-packed characterpalooza. Not only do we get the introduction of the Maid of Steel, but we get classic friction between Superman and Batman over the girl’s trustworthiness, a star turn by Wonder Woman (whose Amazons train the young Kryptonian), Big Barda of the New Gods and even an obscure heroine named Harbinger whose back story is so difficult to explain that the movie doesn’t bother to try. Barda appears because the evil New Gods do; Granny Goodness kidnaps Supergirl so Darkseid can corrupt her, leading to an all-out brawl between the good guys and the “gods” of Apokolips – not only the Big Bad himself, Darkseid, but also Steppenwolf, the Furies (Gilotina, Lashina, Mad Harriet and Stompa) and Parademons o’plenty. 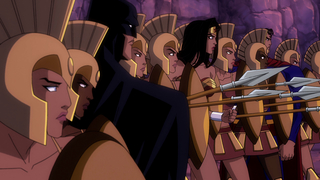 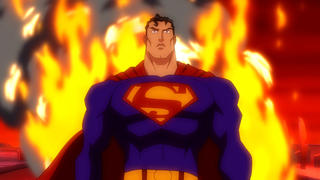 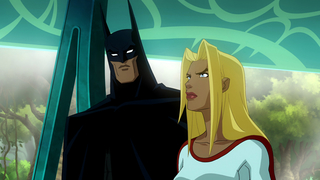 To tell you the truth, though, there was so much heat vision, Omega beams, fist-fights, explosions and macho posturing that it kinda got repetitive and boring after a while for this aging fanboy. That wasn’t helped any by the mediocre animation, which didn’t quite rise to the level of a Justice League Unlimited episode.

Still, there’s a lot to like about a cartoon in perpetual, breathless forward motion, especially for kids. And it’s not nearly as dark – and therefore more kid-friendly – than the last outing, Batman: Under the Red Hood. Plus, the voice casting (by the ever-reliable Andrea Romano) was giddy fun: Tim Daly reprising the Man of Steel, Kevin Conroy doing his growly Bat-bit, Summer Glau (the terminator in The Sarah Connor Chronicles) as Supergirl and the wonderful Ed Asner bending gender again as the incredibly evil Granny Goodness.

The single-disc edition of Superman/Batman: Apocalypse is only $19.98, but you don’t get the back-up short feature. Green Arrow, which will also be included in the DC Showcase Original Shorts Collection later this year, is available on the two-disc DVD ($28.62) or two-disc Blu-Ray ($29.99).
REPRINT ROUNDUP 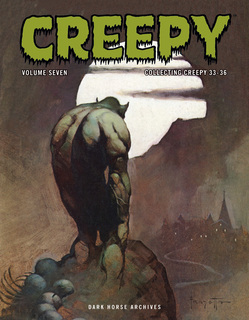 * As the ongoing Dark Horse hardback reprints of Creepy and Eerie are demonstrating, original publisher Warren Publishing ran into financial trouble in the late 1960s, and was forced to make do with less-than-stellar creators. But Creepy Vol. 7 ($49.99) shows that a new decade brought hope for better work to come.

This volume, which reprints Creepy #33-36 from 1970, is still sub-par, especially compared to the mid-1960s Creepy, which boasted major A-list names. But by 1970 a new cast of talent was coalescing at Warren, especially Pat Boyette, Ernie Colon and Tom Sutton, along with old pros like Reed Crandall and Syd Shores. None of them were Frank Frazetta, but hey, they’re not bad. 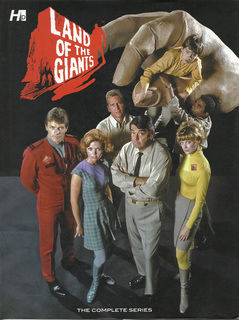 Unfortunately, some of the stories age poorly, especially the sword-and-sorcery stuff, which was trying very hard (and failing) for a Conan vibe. On the other hand, this was the decade that gave us leisure suits and disco, so what can you expect?

* Hermes Press has done me a great service with Land of the Giants: The Complete Series ($49.99), which collects the five issues of that title published by Gold Key in 1968-69. It reminded me why I didn’t watch Land of the Giants when it was on from 1968 to 1970: The young Captain thought it was incredibly stupid, what with the tiny heroes surviving only by defying physics and chance on a routine basis.

Although I kinda wish I had, just to see if the TV show writers were as enamored of Valerie, the “mod jet-setter,” as the comic-book writer (probably Paul S. Newman) clearly was. Her dialogue, of which there’s a lot, is painfully “hip,” sometimes British and sometimes not, and therefore fun for those reasons alone.

I have fallen behind on Creepy and Eerie (and Tarzan and Turok, too, for that matter), although Tracy has kept up and points things out from the stories and letter columns she thinks might interest me or asks questions about this writer or that artist. I’ll catch up one of these days, but for now my interest lies in newspaper strip and Gold Key reprints. Tracy has started reading the new Eerie archive, but for me it was Dr. Spektor (and likely Barney Google after that), all of which shipped yesterday.

My LotG pre-oder is awaiting purchase in my p&h. I have little desire to read the comics until I am able to watch the TV show, and right now the complete series DVD is cost prohibitive.

OLD BUSINESS: ARCHIE: I’m not trying to convince you of anything (not really), but I’d like to follow up on a statement you made two weeks ago about comics strips in general regarding the collection of Archie dailies specifically. You said, “The format is so restrictive that it takes months to tell a relatively simple story, and the daily recaps are maddening.” If those are your only two objections, I can assure you that there is no repetition in the Archie dailies, and that even a comparatively lengthy sequence isn’t all that long.

Ongoing continuity strips such as Dick Tracy or Terry and the Pirates were structured in such as way as to be comprehensible to the reader who read only the dailies as well as the reader who read only the Sundays, hence the repetition. I think that structure is fascinating in itself, but you won’t see any of it in the first volume of Archie. For one thing it reprints only the dailes, and for another each day’s gag has its own payoff, whether as a standalone or as part of a lenghtier sequence (such as Archie and Jughead invading a girls’ summer camp or Archie joining the high school football team).

Tracy tells me that one of my biggest flaws (of which I’[m discovering an increasing number) is that when I discover something I like, I want to force everyone else I know to like it, too. so if you really don’t think you’d like it, that’s fine; the only reason I’m belaboring this point is because of your “Glad to see this group” thread in the “Riverdale High” group.

Comment by Mark Stanislawski on November 15, 2010 at 7:05pm
Just saw Superman/Batman: Apocalypse. Well, it didn't really do anything for me. To be honest, I enjoyed Batman: Under the Red Hood a LOT more than Apocalypse. Not sure if it was the army of fake Doomsday's or the battle at the end where Darkseid kept saying his Omega Beams would render the Super's to dust...but they continually didn't!
Throw in Wonder Woman and the Amazons and Big Barda and they should have named this movie "Trinity Revisited" or "The Rise of Supergirl."
The only other animated movie offering I didn't like was Batman: Gotham Knights and, unfortunately, I bought that one. Didn't make the same mistake with Apocalypse. I'll pass.