Feb. 16, 2010 -- Joe Sacco, famed for the graphic novel Palestine, has served up another engrossing read with Footnotes in Gaza ($29.95, Metropolitan Books). 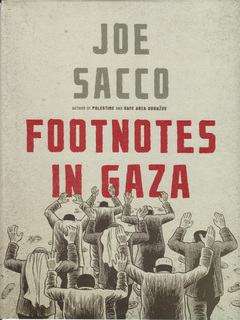 At first glance, some may be confused by Sacco’s books, which look like fictional graphic novels – possibly funny ones. But what Sacco writes about is all too real, and his books are usually found in the history section of bookstores.

Gaza follows Sacco as he tries to write a history of the 1956 massacre by the Israelis of 111 Arabs in Rafah, a city in the bottom-most tip of Gaza. As the title implies, this is just a footnote in the long, bloody saga of Israeli-Palestinian relations.

And it’s difficult for Sacco to find definitive information about this long-ago bloodletting, especially when lethal violence continues all around him. His Arab hosts help him dredge up older Palestinians willing to talk, and we see Sacco and company adjudging how much of this oral history is exaggerated or mis-remembered. But they must maneuver through the minefields of modern-day Gaza, both literally and figuratively, as Israelis continue to dismantle the surrounding Arab settlements in favor of their own. So the book is as much about modern Gaza as it is the Rafah of a half-century ago – Sacco moving back and forth from the past to the present with surprising sophistication, allowing the parallels to reveal themselves without editorial comment.

I say “surprising sophistication” not as a slam against Sacco or graphic novels, both of which no longer have to explain themselves when tackling serious topics. But Sacco draws in the “bigfoot” style, owing much to the work of R. Crumb in its use of cartoon images with elaborate rendering. In other words, it looks like Zap Comix.

I will say that Sacco’s rendering – feathering, cross-hatching, etc. – has become enormously accomplished. It was already excellent in Palestine, but has taken a quantum leap in Gaza.

While often accused of being anti-Israel, I’ve found Sacco’s historical pursuits fair-minded. In Gaza, he never tells you whether the 1956 incident was deliberate or a dreadful mistake. He presents the information as he receives it, allowing the reader to decide how much is believable. 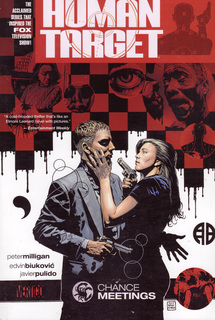 Gaza can be pretty wearying and dispiriting, with the omnipresent misery of life in the occupied territories refusing to let you look away. But that makes books like Gaza all the more important, giving voice to a people who have none.

* With the coming of Human Target the TV series, DC has re-released a trade paperback of note, Human Target: Chance Meetings ($14.99). While it shares some things in common with the TV show, it’s actually a lot better.

As noted in a previous column, Christopher Chance was originally presented as a straightforward, square-jawed hero who was so fearless he would take the place of assassination targets. But in 1999 DC gave the series to British writer Peter Milligan to revamp for the mature readers Vertigo line. Milligan wrote Chance as a much darker, more troubled figure, who sank so deeply into his impersonations that he sometimes couldn’t remember who he was. Milligan threw in a Chance protégé with a similar problem, which made for clever stories wherein the characters were so confused by who they were that readers were left guessing who was impersonating whom, and when. Not a “whodunnit,” but a “who was I when I dunnit?” 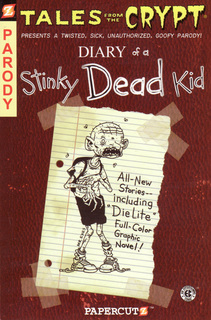 The revamp occurred in a four-issue miniseries in 1999, followed by the graphic novel Human Target: Final Cut in 2002. Chance Meetings includes both those stories, which are far more interesting than the TV take. That show isn’t bad, but it’s not Christopher Chance as Vertigo readers know him.

* Papercutz has continued the 1950s EC title Tales from the Crypt as a younger readers title, which is a stunning irony. In the ‘50s, Crypt was a title that critics claimed was poisoning children. Now, it’s apparently good, clean fun.

Anyway, this new Crypt has done parodies of Twilight and Diary of a Wimpy Kid and collected them in a digest (Tales from the Crypt Vol. 8, $7.95). I have to say “DieLite” and “Diary of a Stinky, Dead Kid” (where the hero’s a zombie) didn’t do much for me. Of course, neither did the source material, which I have mostly avoided.
Perhaps those who enjoy Twilight and Diary will think these stories riotously funny. For my part, they read like Mad lite.
Contact Andrew A. Smith of the Memphis Commercial Appeal at capncomics@aol.com or on his Web site, http://captaincomics.ning.com/.