From Christmas to Kwanzaa, the holiday season provides an occasion for just about anyone of any faith to please the geek in their life with an appropriate gift. But what to get? Fortunately, the publishers are aware of the opportunity, and put their best foot forward this time of year. 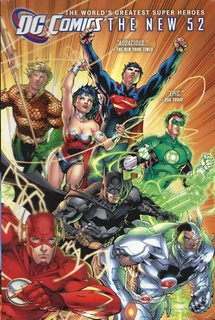 For example, the biggest event in comic books in 2011 (and possibly ever) was DC’s simultaneous re-launch of 52 titles in September. But even though the bulk of these books were $2.99 – the low end of the scale for comics these days – most would find it financially imprudent to buy all those first issues. To the rescue comes DC Comics: The New 52 Omnibus ($150).

Yes, that’s a lot of money. But it’s also a lot of book – 52 comic books, weighing in at more than seven pounds! And it’s cheaper than if you bought the comics individually. Plus, it’s a really nice package, a hardback with slick paper and vibrant colors.

As to the contents, it’s a mixed bag, like all anthologies – some books will stir your imagination, others will leave you cold. But all of these books are DC’s best effort: its finest editors, writers, artists, inkers, colorists and letterers doing their absolute utmost on a huge, make-or-break roll of the dice. DC’s creators won that bet for the publisher with top-flight work that has succeeded financially, critically and creatively.

That’s what you’ll be getting in this Omnibus, which alone makes the book worthy of your shelf. It’s also the foundation for DC’s superhero titles for the foreseeable future, the blueprint of tomorrow. And as much as it points to the future, the first issues of “The New 52” are also important historically – a huge event that will grow in funnybook legend and fanboy myth.

All of that is contained in DC Comics: The New 52 Omnibus. No wonder it’s so heavy!

Speaking of funnybook legends, Carl Barks is revered among comics fans for decades of work on Disney’s ducks (1942-66). He not only expanded Donald and his three nephews from one-note humor characters to multi-dimensional adventurers, but created and developed Uncle Scrooge, as well as much of the Disney duck mythos, like the Beagle Boys, Gyro Gearloose and Gladstone Gander. Barks worked anonymously in the Disney empire, but was nonetheless known among fans as “the good Duck artist,” who alternated between long, globe-trotting adventure stories and shorter, humorous domestic antics.

Barks’ work has been reprinted often, but sporadically. There has never been a comprehensive effort to archive his work … until now. Walt Disney’s Donald Duck: Lost in the Andes” ($24.99) begins an ambitious publishing plan by Fantagraphics to capture all of Barks’ duck work on slick paper between hard covers with lushly restored printing and coloring.

This first volume finds the master at his peak: 1948-50. The lead story is a 32-page rip-snorter that takes Donald and his nephews to a lost Incan city where the inhabitants all speak English with a Southern accent. (Why? Read the story!) The rest of the book is filled with short humor tales set in Duckburg, Calisota; one-pagers pitting Donald against Huey, Dewey and Louie; extensive notes on each story; and a long essay by comics academic Donald Ault.

It is, quite simply, a gem. Every comics fan of any age will love this book.

From slavery to Jim Crow to the Civil Rights era, no group in America has been so harshly oppressed as African-Americans. Which makes it all the more remarkable that their literature is so full of life, love and laughter.

That doesn’t mean there’s no tragedy in this book, wherein today’s top African-American creators adapt stories and poems by African-Americans 1891-1931. Several stories would break the hardest heart. But it’s hard not to laugh out loud when Zora Neale Hurston has two black men arguing that the other’s state has the worst white men (and their own the best), or when Leila Amos Pendleton imagines a 1922 black society’s unique take on “Cleopatra” (“She orta lef dem wimmin’s husbands ‘lone.” “Maybe if her Ma had lived she woulda been a better girl.”)

This book is fascinating glimpse into a perspective and an era that’s largely unexplored in comics. It will be an education for many, but as school goes it’s painless and fun.

DC’s creators won that bet for the publisher with top-flight work that has succeeded financially, critically and creatively.

Maybe I'm reading the wrong blogs, but I haven't read much that was very highly appreciative of any of the New 52 comics in a critical sense.  I've read a lot that said "There's negative point X, negative point Y and negative point  Z, but in the long run, maybe the writer will work those out."  Which isn't the same as critical praise for the issues that have actually been produced so far.

I'd be very interested in reading a few indepth critiques of the New52 that are fulsome in their praise of what's actually on the page and highlight why some of these comics are exciting and maybe even groundbreaking.

I praised Action Comics #1 to the skies!

Critically praised - 'by me' - works, I suppose.

I actually bought All-Star Western #1.  I love Western films, and I rate your opinions highly, so I should like it, but when I was glancing through the issue, I saw the full page spread of the eviscerated prostitute you mentioned.  For some reason, that has put me off  reading it.  DC Comics are institutionally sore on their womenfolk!

I bought a few more issues of Animal Man and Swamp Thing, so liked their #1 issues well enough.  However, Abby appearing at the end of ST issue #1 has annoyed me.  I loved Moore's and Wein's runs, but surely a whole new rebooted universe means its time to move on?

I liked the oddball art of Animal Man #1, but looking closely at the art in later issues, there's a lot of wasted space and strange choices in the layouts.  It falls down on 'bang for your buck' somewhat.

Which is off the point a bit regarding the critical worth of the #1 issues, but there you go...