There’s a sub-genre in superhero comics that asks the question “What if superheroes really existed?” and the answer is usually “bad things.” The graphic novel A God Somewhere (DC /WildStorm, $24.99) is a prime example, and a very good one. God is the story of Eric, Hugh, Sam and Alma. Alma and Hugh are married; Hugh and Eric are brothers; Eric and Sam are best friends. Hugh is the younger, smarter brother with a stressful job and a settled domestic life. Eric is more laid-back, works as a driver/delivery guy for a loosely disguised UPS and is born again (but he doesn’t push it). Sam also works at “UDS.” Alma is the cute chick they all met in college, but she was attracted to Hugh.

Got it? OK, then something happens and Eric gets superpowers. BOOM! The event isn’t really explained, the powers are essentially the Superman set (via telekinesis), but none of that is really the point. What’s important is what happens to Eric, Hugh, Sam and Alma – and the world – when one of them is suddenly virtually omnipotent.

This is the sub-genre I was talking about. Back in the mid-1980s, Alan Moore asked himself “what would really have happened if people started wearing masks and fighting crime in the 1940s?” And the answer was Watchmen. Because if people chose to be “mystery men,” and then an actual superhero appeared (in the form of Dr. Manhattan), then there would be a huge ripple effect. Everything would change.

Watchmen launched a new sub-genre, one that didn’t use superheroes as a single, anomalous fantasy element in a prosaic world that remained otherwise unaffected, but instead lets organic changes play out due to the existence of the fantasy element. Marvel had a line of superhero comics called “New Universe” whose tagline was “the world outside your window.” Writer Mark Waid gave us Kingdom Come, where third-generation superhumans run wild, and currently Irredeemable, where a Superman archetype has petty human emotions instead of the Man of Steel’s noble persona.

And now we have A God Somewhere, by John Arcudi (B.P.R.D.) and Peter Snejbjerg (Starman), where an ordinary schlub is inexplicably given godlike super-powers. The powers don’t go to the obvious brother, the mature, responsible one. Too easy. Instead it’s the free spirit, the delivery guy in shorts.

Eric is the church-goer in the group, which might lead some writers down some obvious paths. But nothing Arcudi does is that ham-handed. The story is organic, but not predictable. It’s the kind of great story where something unexpected happens, but in retrospect you think “Of course! Why didn’t I see that coming?” And you really get to know Eric, Hugh, Sam and Alma – they become friends of ours, as well as with each other.

Snejbjerg’s art is perfect. He’s good with expressions and body language, which is indispensable in a story that focuses on small-scale human emotion. His storytelling, like his brushstroke, is smooth. He never goes over the top. And, heck, it’s just purty.

A God Somewhere isn’t Watchmen, but it doesn’t try to be. Watchmen changed the world. God changed Eric, Hugh, Sam and Alma. But like Watchmen, it isn’t always change for the better. 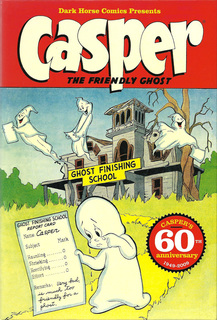 I should have read the small print when I ordered the Casper the Friendly Ghost 60th Anniversary Special (Dark Horse, $9.95).

All of these Casper stories have been reprinted recently, in Harvey Comics Classics Vol. 1: Casper the Friendly Ghost, which also had more than 100 other Casper stories. So that’s, you know, a better buy. And these two Casper comics aren’t even particularly good; it’s so early in the character’s development that he is almost unrecognizable, and there’s no supporting cast yet. The non-Casper stories from the St. John’s book are “new,” but who wants to read “Benny Beaver”?

I have no one to blame but myself. Next time I’ll read the fine print!

Comment by Jeff of Earth-J on July 8, 2010 at 12:20pm
I have not heard of A God Somewhere but it sounds interesting and I generally like those “What if superheroes really existed?” stories. I must remember to give it a look.

Comment by Dagwan on July 8, 2010 at 2:55pm
A God Somewhere was really good. I ordered more-than-average for a Vertigo OGN, but they still sit there unsold. I think that this sub-genre of super-hero comics is not drawing people in they way it would have before the darkening of the DC and Marvel universes.

Check out the Secret Headquarters (my store) website! It's much better now!

Comment by Captain Comics on July 8, 2010 at 5:15pm
Dagwan, have you thought about printing out positive reviews like mine, and posting them near where the OGNs are displayed? I'm sure mine is not the only positive review, and if there were two or three, it might nudge someone who was on the fence. My LCS does that, and also amends comic-box separators to read "Employee Pick of the Week" and puts them in the middle of books they want to move.

Of course, you're probably already doing all of these things, and if you are, I apologize for getting in your business.

Check out the Secret Headquarters (my store) website! It's much better now!

Comment by Mark Sullivan (Vertiginous Mod) on July 9, 2010 at 3:32pm
This sounds interesting to me, too. I like the creative team on other things, separately (don't recall them ever working together).