It doesn’t seem probable, but a new graphic novel with Batman at the center of a classic Christmas story is simply terrific. 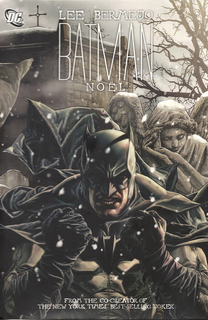 Lee Bermejo writes and draws Batman: Noël ($22.99, DC Entertainment) which tells of a Batman/Joker battle through the lens of A Christmas Carol. At first blush this sounds like a terrible idea; the schmaltz of Charles Dickens would seem a poor fit for Gotham City. Amazingly, Bermejo makes it fit like a glove.

Well, a glove with brass bat-knuckles crunching into the face of a cowardly criminal, that is. On the Batman Grimness Scale – with Adam West’s campy Caped Crusader on one end and Frank Miller’s psychotic Dark Knight Returns on the other – Bermejo’s Batman leans strongly toward “Heartless.” Almost Scrooge-like, you might say.

So alert readers will realize immediately that Batman has a lesson to learn, and a voice-over – we don’t know whose voice until the end – tells the familiar tale of Scrooge meeting three spirits that change his perspective. There’s enough variation from the original to leave little doubt who is “Scrooge,” but it’s muddied enough that the Dickens tale remains largely intact. The “spirits” are characters everyone will recognize, and moreover, they work well metaphorically in plain old flesh and blood.

Bermejo has graphic novels like Luthor and Joker under his utility belt as an artist. Here, in his authorial debut, he pulls off the nearly impossible, scraping the barnacles off the most oft-told Christmas tale and successfully applying it where it would seem least likely to work.

Even if it didn’t, though, I’d still recommend Noël for the art alone. Bermejo has always been exceptional, but in this book we see a plausible leather-and-metal-clad Batman (his suit fairly creaks) and a Gotham rendered so lovingly that it, too, feels real.

Points go to colorist Barbara Ciardo too; her frozen, blue-white Gotham sucks the warmth right out of you. She wields the complementary colors just as well, giving a certain Kryptonian an inner glow entirely appropriate for a man fueled by the sun.

* I’ve never been the biggest fan of Lewis Trondheim, the French cartoonist best known for his role-playing-game parody series Dungeon. But his latest Little Nothings Vol. 4 (NBM, $14.99) was so entertaining that I’m going to have to re-read his oeuvre with fresh eyes.

This collection of one-pagers illustrates Trondheim’s adventures in a trip across the U.S.  It’s a travelog comprised of both the exotic and the mundane, and throughout we are treated to Trondheim’s curmudgeonly reactions. It’s like Andy Rooney commenting on a trip to France, only in reverse.

Little Nothings is illustrated in a cartoony style that would feel at home in a children’s book. But Trondheim’s urbane, self-deprecating humor is so dry it would go over the heads of children (and many adults). The French may be enamored of the broad comedy of Jerry Lewis, but you wouldn’t know it from Trondheim’s subtle and sarcastic wit.

* Sometimes a comic-book story based on a videogame rises above its obvious limitations. Then you’ve got Bleedout Volume One (Archaia, $14.95).

Written by Mike Kennedy, Bleedout contains 10 chapters by 10 different artists that sets up what I presume is the premise of the game, detailing a world run out of oil and how Sunrise City, U.S.A., is now run by a criminal cabal. The 10 chapters explore the different factions and leaders who jointly control Sunrise, narrated by the mysterious Pilot, who wants to kill them all for revenge, and whose back story we piece together over the course of the book.

The problem with any graphic novel based on a videogame is that it can’t end – it just sets up the game, which also doesn’t end, so you can play it over and over. And that’s the problem with Bleedout. It’s all set-up, with no payoff.

Further, Pilot’s narration is the only voice we hear, so we don’t really “meet” anyone else – all the other characters are simply described, like (cough) players in a game. And the author’s tendency to use lines from Jesus’s betrayal in The Bible to describe Pilot is both pompous and wildly tone-deaf.

What redeems Bleedout is the art, which includes luminaries like Ben Templesmith and Howard Chaykin. If you’re looking for an actual story, though, you may need to wait for Volume Two.

3. Bleedout Volume One, based on a videogame, makes you wish you'd bought the game instead. Courtesy Archaia.

"the schmaltz of Charles Dickens"

Actually, if you go back and re-read the original Christmas Carol, without the filter of various subsequent adaptations, it's not really all that schmaltzy.  I won't say it's entirely free of rendered chicken fat - Dickens was no Frank Miller - but it's not all sentimental sweetness and light, either.

Much of Dickens is a great mixing of light and darkness.  I did preorder Noel on your rec, Cap.  I see, via amazon, that there is a Batman: Through the Looking Glass original graphic novel coming early next year by Bruce Jones and Sam Keith...I preordered that, too...it tell of the "first" meeting between Batman and The Mad Hatter.

Hmmm...there have been some comments deleted.

I read Batman Noel this afternoon. I picked it up on a whim last week. It's a solid read. I think it's a clever take on the A Christmas Carol and especially who the narrator is. I thought I knew, but I was wrong. It's no Dark Knight Returns but it's a good book nonetheless.

The girls saw that I had it and wanted it as a bedtime story last night.  They really liked it...as did I.

I liked it, as well.  Just got it yesterday and enjoyed every minute.

I truly liked the use of Superman as the Ghost of Christmas Present.  I thought that his view was a pin hole of light into the darkness of the Dark Knight.