Oct. 26, 2010 -- Halloween is fast approaching, so some spooky reading is in order – and there’s no dearth of death to choose from. 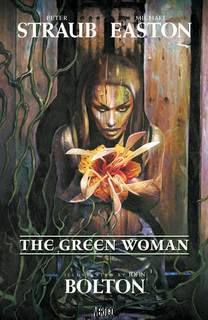 At the top of my list is The Green Woman (DC/Vertigo, $24.99), by novelist Peter Straub, comics writer Michael Easton and painter John Bolton. Straub, who has collaborated with Stephen King, knows his way around a horror story, and does not disappoint.

The actual plot is interesting, but that isn’t the part that chills. That would be the execution, and I use that word deliberately.

The Green Woman of the title is the figurehead of a ship where the entire crew went mad, and whose timbers were used to build a pub in Ireland which became a nexus of serial killers. The figurehead – a naked woman massaging her own breasts – was spared and became part of a boarded-up bar in America, where again it attracts (or creates) serial killers.

Blah, blah, blah. The true story is the serial killers at the heart. Mainly Frank Belknap (actually, that’s just one of several names), who has been “serving” the Green Woman since his Col. Kurtz-like stint with the Green Berets in Vietnam and the CIA in Cambodia, and is now pushing 60 after a lifetime of murder. He’s getting tired, but still hears the Green Woman’s whispers and sees faces in the plumbing, while a younger serial killer named Billy (the kid?) pushes for his “job” as the biggest, baddest serial killer of all. We see Belknap’s brutal past in a series of flashbacks, beginning with his own mother’s murder and his disfigurement by an earlier serial killer, while he is pursued by an alcoholic, former NYPD detective named for an old Western movie star, who also hears – but is resisting – the Green Woman’s call. All of this is delivered in such a blood-curdling matter-of-fact as to be truly terrifying.

Which is a high compliment for a horror book! So indulge your dark side, but only if you’re not alone and you leave all the lights on. 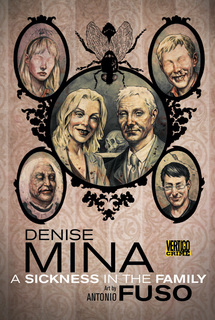 Another Vertigo offering comes highly recommended. A Sickness in the Family ($19.99) takes place in Scotland, where the family Usher is falling apart emotionally in a building built over ground where a witch was executed in the Dark Ages. Any fan of Edgar Allan Poe knows that no family named Usher is going to have a happy ending, and sure enough it’s not long before the killing starts. First it’s two tenants in the flat downstairs who appear to kill each other, then the grandmother takes a suspicious fall and suffers mysterious injuries, then the mater familias, who is a serial adulterer, is suffocated. The police are interested in everybody … but the list of suspects keeps getting shorter, as they are murdered one by one.

Is it the witch, poisoning minds from beyond the grave? Is “this place” – written in blood on the wall by a victim – cursed? Or is there a more mundane explanation? Sickness is so slickly written (by Denise Mina) you’ll never guess until the end, and even then you’ll be thinking nervously about it long into the night.

Sickness isn’t without drawbacks. It takes place in Scotland, so there is occasionally a slang barrier, although nothing that can’t be figured out by context. And I’m no fan of Antonio Fuso’s sketchy art style, but he does help the reader distinguish one face from another, which is essential for a character-driven story like this. 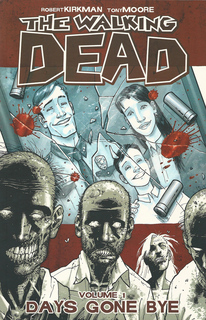 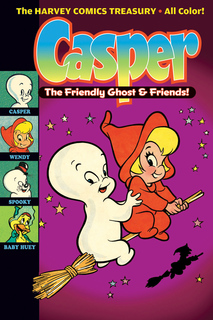 * Fun with Zombies: Don’t miss “The Walking Dead,” debuting on AMC Halloween night. It’s based on an absolutely mesmerizing B&W comic book series from Image Comics, and the TeeVee adaptation looks faithful – and the trailer is terrific! Watch the show, buy the trade paperbacks.

* For the Kids: Dark Horse is reprinting the old Harvey Comics material, and I recommend the recent “Harvey Comics Treasury Vol. 1: Casper the Friendly Ghost & Friends” ($14.99), which features Casper, Wendy the Good Little Witch, the Ghostly Trio and Spooky. It’s written and drawn by former Disney hands, and is the absolute best of the kiddie genre. Be a good parent and buy them this (and volume two, featuring Hot Stuff) – and read it to them.

Comment by Figserello on October 28, 2010 at 8:05pm
The Green Woman sounds interesting. Irish connection as well! I have to confirm that not all Irish pubs are havens of singing and the craic! Some are creepy dead ends of places.

By the cover alone, Bolton's art looks even more stunning than ever.

Straub, who has collaborated with Stephen King, knows his way around a horror story, and does not disappoint.

This might be an understatement. From my limited understanding of these things horrific, Straub is held in extremely high regard, and is probably regarded as a better horror writer than King, including by King himself.

I picked up a Straub book called The Hellfire Club at the weekend, so I'm expecting a blood-curdling chiller. I'd forgotten about the season of ghouls upon us. Hallowe'en doesn't make much of an impression in Australia, what with the days getting hotter* and longer about now...

Comment by Mark Sullivan (Vertiginous Mod) on October 29, 2010 at 12:08am
Put me down as another one interested in The Green Woman. It's an impressive list of creators, so I'm glad to hear that it does not disappoint. I'm going to reread the first two Walking Dead TPBs this weekend, in preparation for the TV premier and the discussion group at Heroes Aren't Hard To Find next Saturday.