'How to Understand Israel' works on more than one level

Nov. 16, 2010 -- Sarah Glidden’s debut graphic novel How to Understand Israel in 60 Days or Less (DC/Vertigo, $24.99) registers in a lot of different categories, and is charming and thoughtful in all of them. 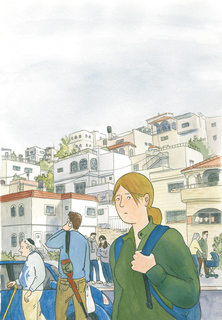 On the surface, at least, Israel could be pigeonholed into that fast-growing category, the first-person, graphic novel travelogue, like Joe and Azat and Burma Chronicles. Glidden’s ironically named book is about a “Birthright Tour” she and her gal pal/sounding board Melissa take to Israel. As such, the reader gets to travel with her to famous (and infamous) places like the Golan Heights, Masada, the al-Aqsa mosque, the Western Wall and the Dead Sea.
It’s also something of a book exploring Middle Eastern politics, as discussion and argument about “the situation” ensues between the pro-Palestinian Sarah and her guides and fellow travelers, who hold a variety of opinions (or, like Melissa, none at all). This places Israel in the fine company of other graphic novels which do similar heavy lifting about this thorny subject, like Joe Sacco’s Palestine and Footnotes in Gaza.

And thirdly, and probably most importantly, Israel is also a very personal story, something of a coming-of-age for Glidden. Given the location and subject matter, Rutu’s Exit Wounds immediately leaps to mind. Also, Glidden’s artwork seems to owe something to Rutu as well. Glidden’s style seems to still be in the process of forming, but where it is strongest I was immediately put in mind of Exit Wounds. (And, for the record, Glidden’s art – while not strong – is of the cartoony Tintin style that clearly defines what you need to see, and assigns sufficient visual cues that distinguishing one character from another is never in doubt. Some older and more accomplished artists have failed to achieve these simple reader-friendly techniques, so I’m not complaining. I’ll take clear content over artsy, elaborate style any day.)

It is that last category where Israel leaves you thinking. Glidden doesn’t spare herself in her mocking self-description as the almost clichéd, left-wing, pro-Palestinian, mostly secular New York Jew. But from there the book treads virtually new ground. Glidden expects the Birthright Tour to brainwash her, and she has shields up and phasers on stun throughout. But, to her surprise, the presentation is not always pro-Zionist, and sometimes threatens to be balanced and reasonable. Her resultant cognitive dissonance is represented by a “brainwashing trial” in Glidden’s head, where all the principals (judge, defense attorney, prosecutor, jury) are all played by Glidden. These abrupt detours into metaphorical depiction of internal monologue are just one of the charming storytelling techniques Glidden invents or swipes to acquaint the reader painlessly with various questions, conflicts and back stories, including the ever-reliable flashback and the surprisingly effective use of historical montages whizzing behind static characters in the foreground.

The overall result is Glidden experiencing an emotional and philosophical journey a bit different than she expected – full of starts and stops, dramatic extremes and no easy answers, either for her or for the reader. This is a pretty sophisticated tale, one that asks a lot of the reader, while telling a fresh, new story in a very old, storied land.
REPRINT ROUNDUP 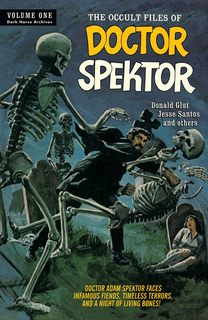 I was confused as a youth by Spektor, who sometimes seemed to be a “Crypt-Keeper”-like host of weird tales and sometimes a magical hero like Dr. Strange. This dichotomy is explained at last by series writer Don Glut, whose Introduction notes that he wanted to write Dr. Strange-type stories, while his editors wanted an anthology host – so Adam Spektor pulled double duty. (Amazingly, as late as 1973 Gold Key thought no one would read continued stories, despite their huge success at Marvel and DC comics for more than a decade!)

Glut, a professional writer with a long resume, did surprisingly entertaining work within his editors’ restrictions, not only in characterizing the amusingly stodgy Spektor but by including a heroic, female, full-blooded Native American sidekick/girlfriend – perhaps the first such character in comics. And even Glut isn’t sure how he got away with having the unmarried Adam and Lakota Rainflower living together at stuffy Gold Key.

Add that to Spektor’s reliance on knowledge over fisticuffs to save the day, and it’s easy to see why Occult Files was such a memorable series, then and now.

Comment by Eric L. Sofer on November 19, 2010 at 7:15am
"How to Understand Israel in 60 Days or Less" is a question? We celebrate it at every single holiday of the year.

They tried to kill us.
We won.
Let's eat!

Comment by Jeff of Earth-J on November 20, 2010 at 10:37am
I posted comments about The Occult Files of Doctor Spector here. I sent an e-mail to Don Glut using the contact info provided in his bio. He responded with a nice note saying it was the first feedback he had received and that he hadn't even got his copy yet. I wish all Dark Horse archive editions were reprinted on this paper stock.