Fox is promoting its new show Human Target (debuting Jan. 17) pretty heavily. And why not? It’s another property based on a comic book, and those seem to be doing well these days. 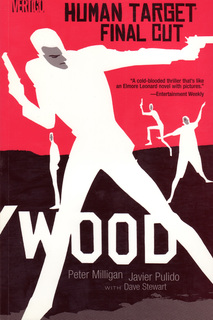 And, although Human Target in comics is a minor strip canceled numerous times, it has somehow managed to keep coming back. Some elements of all those versions are found on the TV show, so they’re worth exploring.

The Human Target debuted in the back of Action Comics #419, way back in 1972. Written by Len Wein (Swamp Thing) and illustrated by Carmine Infantino and Dick Giordano, Target starred Christopher Chance, a square-jawed hero and bon vivant. Chance would use his amazing disguise abilities to impersonate someone whose life was in danger, and then use his astounding command of martial arts, firearms, explosives and so forth to confound and capture the would-be killer. In between gigs, he would hang out at Bruno’s, a high-end restaurant owned by a chef and aide-de-camp of the same name, drinking expensive wine, eating gourmet meals and picking up extremely attractive women.

As a male fantasy, that can’t be beat. And the disguise angle was a new wrinkle on the old private-eye genre.

But the concept never really took off. Chance had eight stories in the back of Action before moving to Detective Comics, where he appeared five more times (still written by Wein, but illustrated by Howard Chaykin). Chance played an important role in a 1982 Batman story, and had a cameo in the 1986 Crisis on Infinite Earths, but his headline strip ended in 1980, and Chance seemed destined for funnybook limbo. 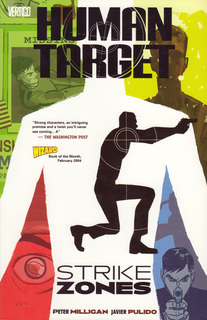 But then Chance was rescued … by Rick Springfield. For some reason, ABC thought the series worth resuscitating in 1992, with the singer in the title role. The adaptation was pretty straightforward, except that it dropped Bruno in favor of “Philo Marsden,” the now-cliché eccentric computer-genius sidekick. The series only lasted seven episodes – but in all fairness, it was competing with the Olympics.

For the sake of completeness, I’ll also mention that DC published a one-shot that dovetailed with the series. Human Target: The Mack Attack Contract (1991) was by Mark Verheiden and Rick Burchett.

This is all pretty standard for comic-book detectives. Most have their brief moment in the sun before fading into limbo or becoming supporting characters for guys in Spandex.

But seven years after the ABC experiment, DC did something very, very odd to Christopher Chance. They moved the concept to their mature-readers line Vertigo, and handed it to Peter Milligan, a British writer known for surreal and/or kinky stories (Shade the Changing Man, Enigma, The Extremist). Milligan wrote a complex four-issue miniseries in which it is revealed that Chance’s psyche has become unstable and fragmented. He not only assumes new identities, but he becomes that person, forgetting who he really is. And since he doesn’t know, the reader is often left guessing as well. That apparently did well enough for an original HT graphic novel. Human Target: Final Cut (2002) where once again, the nature of identity was explored. (The mini and the GN are available in the trade paperback Human Target: Chance Meetings.)

Milligan was again rewarded, this time with a Human Target ongoing series. Not only did the readers have to play Whack-A-Mole with Chance, but Milligan introduced another character with a similar problem: Tom McFadden, a former Human Target protégé who had completely lost his original personality. With that, the reader never knew if the character narrating the story was Chance, McFadden, the original – or some combination, as everyone impersonated everyone else, and often they didn’t know who they were themselves.

That series lasted only 21 issues (2003-05). But that was longer than Chance’s original run as a stock heroic type, and seems to have re-defined the character. Even the new TV series says of Chance (Mark Valley): “Does anyone know who Christopher Chance really is? What secrets lay buried in his past?”

And that’s probably good enough. Chance’s disguise twist is at least as interesting as Monk (the “defective detective”) and that show had a good run. And if they add the identity problems, it could break new ground. On TV, at least. Chance is already pretty odd in the comics!

Comment by Mark Sullivan (Vertiginous Mod) on January 14, 2010 at 1:28pm
If the show succeeds maybe they'll complete the trade collections of Milligan's series, too. I know it lost you before the end, Cap, but I think it was good enough to merit collecting. Milligan's miniseries was terrific: one of my favorite Vertigo miniseries. The new collection of that and the GN is a great deal for anyone who doesn't own them already.

Comment by Travis Herrick (Modular Mod) on January 14, 2010 at 4:30pm
I really liked the Vertigo series, and was sad when it was canceled. I am totally indifferent to the new Fox series I might give it a shot though, depending on when it comes on....

Comment by Captain Comics on January 14, 2010 at 5:54pm
Some series improve on second reading, and Milligan's Human Target did for me. DC sent me Chance Encounters for review, and I'm looking forward to re-reading these stories.

Comment by Luke Blanchard on January 15, 2010 at 3:59am
I think the character must derive from the story "The Human Target" in House of Mystery #26 (1954). This concerns a police detective who disguises himself to take the place of people whose lives are in danger.

Comment by ClarkKent_DC on January 15, 2010 at 9:56am
I saw only a few of the old backup stories, but I well remember The Human Target's appearance in Batman and Detective Comics (this was back when stories from the one crossed over to the other on a regular basis. Alfred hired Christopher Chance -- without Batman's knowledge -- to impersonate Bruce Wayne because that nosy Vicki Vale was too curious about the whole secret identity thing. At one point, Dick Grayson learns of the plan and tells Alfred that it won't work unless Vicki sees Batman and "Bruce" together, a point Alfred had failed to consider. (Really?) Fortunately, it happened, but not through Alfred's direct efforts; Batman was chasing some crook (Killer Croc, I think) and crashed into one of those innumerable charity balls that Bruce Wayne often attends. He seemed a bit taken aback to encounter "Bruce Wayne" in the audience, but both men played it off well.

I liked the Vertigo miniseries, didn't know about the one-shot graphic novel, but I bailed on the ongoing series after the first year. Turning Christopher Chance into a two-fisted gunman didn't quite sit right with me; he's more along the vein of lighthearted adventurers and puzzle-solvers like Columbo.

Comment by PowerBook Pete, the Mad Mod on January 20, 2010 at 8:23pm
I just watched the first episode of the new series. It wasn't bad, but it didn't really jump out at me, either. Tricia Helfer is quite a chameleon, isn't she?

I was massively wrong on where the proto-Human Target story appeared. It actually appeared in Gang Busters #61, where it was cover-featured. I have it in an Australian comic, but the GCD tells me it was reprinted in the US in Detective Comics #419.

House of Mystery #26 had a story with the same title. It was cover-featured too; the cover shows a ghost interrupting a knife-thrower. A still earlier story with the title appeared in Detective Comics #201. That was also cover-featured, and in that case the title character was a person Batman and Robin protect.