If you like AMC's 'Walking Dead,' more thrills await in the comic book

And that’s deserved, because TWD is a terrific show. But it started as a terrific comic book, and if you’re not reading it, you should be. If you think the comics would spoil the TV show, or that the TV show makes the comics redundant, that’s not the case: AMC has made the canny decision to follow the general outline of the comic book, but not the specifics. 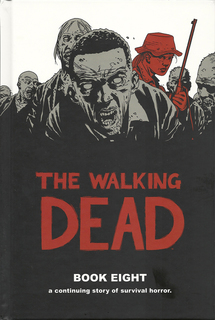 With this season, the gang on the show is just now moving into a Georgia prison for safety, which happened in the comics back in 2004. But already stark differences between the two formats are in evidence. In the comics, for example, Dale Horvath was alive when they reached the prison, but Hershel Greene wasn’t – but on the TV show, that’s reversed. Also, in the comics Rick’s gang was larger, and the composition was different, with a lot more children. And finally, in the comics Rick allowed the surviving convicts to join the group, whereas on the TV show he isolates them in a different cell block.

Those are just the obvious contrasts a fan of one format would notice when sampling the other. But there are plenty of subtler differences as well, many an inevitable result of a story playing out in two different media with different strengths and weaknesses. For example, the characters’ internal struggles are much more evident on an actor’s face than in a pen-and-ink drawings – but in a comic book, you can know what characters are thinking. So there are pluses and minuses in each approach.

Which is why I heartily recommend that non-readers give themselves a Halloween treat and catch up on The Walking Dead in print. Image Comics has made that as easy as buying soft drinks: You can buy any size you like. There’s the $3.99 monthly comic book (now up to issue #103); the $14.99 trade paperbacks, which collect six issues each; the $34.99 “Book” format, which collects 12 issues in hardback; the $35.99 “Compendia,” which collect 24 issues in massive trade paperbacks, and the $59.97 “Omnibus” format, which collects 24 issues per volume in hardback with a slipcase.

But lock the door before you start reading, and leave all the lights on. You’ve been warned. 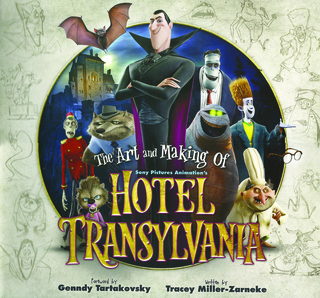 Art takes us through the process of creating each character, each background, each plot point of the movie. As a frustrated cartoonist myself, I found it fascinating to see all the variations on the main character alone. There’s a page of fat Draculas, old Draculas, imperious Draculas, modern Draculas, old-school Draculas, you name it – until creator Genndy Tartakovsky (Star Wars: The Clone Wars) settled on a version that played to the strengths of the voice actor, Adam Sandler.

“One of the challenges of new versions of classic characters such as Dracula and Frankenstein is finding the balance between the expected and the unexpected,” writes author Tracey Miller-Zarneke. And with more than 400 pages of concept art, character designs and digital art, along with interviews with creators, filmmakers and crew, the reader gets to go along for the ride.

Meanwhile, the latest American Vampire collection is out from DC/Vertigo, and I have to say it’s the first one that hasn’t completely blown me away.

American Vampire Volume Four ($24.99) is the first that doesn’t star the usual group of characters we follow, the current representatives of the Book and Cash families, whose history forms the spine of the American Vampire narrative. That may explain my tepid interest. 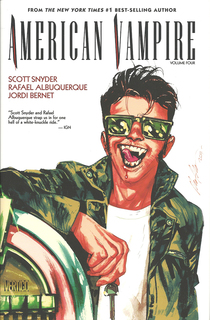 But it may also be that the three, almost-unrelated stories in this collection didn’t grab me.

The first is set in the old West, starring Skinner Sweet in his pre-vampire days and his half-brother and later nemesis Jim Book. While Skinner has been believed to this point to be the first American vampire, this story – “The Beast in the Cave” – reveals an earlier one, from around the 16th century. But there is no doubt by the end of the story that the title refers metaphorically to Skinner as much as it does literally to the ancient bloodsucker – which comes as no surprise at all to regular readers.

The second, "Death Race,” is set in the 1950s with every cliché from that decade. Our hero is a vampire killer who steps right out of The Wild One (or Grease), with James Dean hair, a cigarette perpetually hanging from pouted lip, black leather jacket, white T-shirt and rolled-up blue jeans. I’m half-surprised he wasn’t named Elvis, and the ending was telegraphed pretty early.

The third story promised to be the most interesting, with the first African-American vampire starring in a two-part story set during the Jim Crow South. But it failed to tackle these issues directly, instead essentially serving as a set-up for the next adventure, which will take place in the next volume.

But, while I’ve been a bit critical of this book, it is still head and shoulders above most comics fare. This book is a solid double, and is only a disappointment in that we’re used to home runs.

2. The Art and Making of Hotel Transylvania pulls the curtain back on the creative process. Copyright Titan Books.

3. American Vampire Volume 4 includes one story set in the old West, and two in the 1950s. Copyright DC Entertainment

Speaking as someone in the NY Metropolitan area, I have to point out that this statement:

Image Comics has made that as easy as buying soft drinks: You can buy any size you like.

I have been saying the same thing to everyone I know who digs the show!