April 19, 2011 -- Archaia’s Inanna’s Tears isn’t what it says it is, but it’s a good enough graphic novel to overcome erroneous marketing. 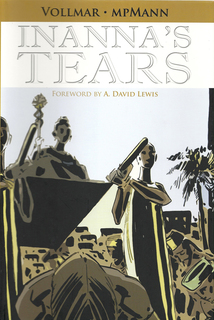 Tears ($19.95), by writer Rob Vollmar and artist mpMann, bills itself as a story set in one of the most crucial turning points in human history: The discovery and application of writing in ancient Sumer, which is essentially the start of history. But while one character does suggest broadening the mathematical marks the Sumerians use for agriculture into a full-bodied language, his suggestion goes nowhere. So the whole beginning-of-civilization thing is a sidebar at best.

But the actual story, while probably entirely invented (as it takes place before writing), is mesmerizing. We are introduced to the peaceful “people of the city,” who live within walls and worship the fertility goddess Inanna, who speaks through her mortal consort the “En.” Outside the walls, the “people of the hills,” who are led by the brutal Belipotash and worship the war god Geru, grow jealous of the city’s prosperity and conspire to take the city for themselves. As it happens, the current En is female, and Belipotash plans to tie the two religions together on the physical plane as well, whether the En likes it or not.

What follows is in the best tradition of swords-and-sandals movies, with palace intrigue, spear-throwing, riots, fires, religious mania and a Great Flood. (mpMann previously worked on Some New Kind of Slaughter, a 2007 graphic novel about all the Great Floods in legend and folklore, so I half-expected a deluge every time I saw a raindrop.) Vollmar’s story is exciting and plausible, Mann’s gritty, half-finished artwork is perfectly suited to historical epics, so Inanna’s Tears will take a place on my bookshelf – although in “Fiction,” not “History.” 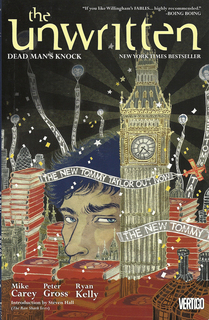 * I’ve bragged about The Unwritten enough that I’m quoted with other blurbs at the beginning of the third and latest collection, Dead Man’s Knock (DC/Vertigo, $14.99). My enthusiasm has only waxed as The Unwritten has progressed, and writer Mike Carey and artist Peter Gross take bigger and bigger chances.

The conceit of this series is about the power of stories – and if you’re reading this column, then you’re already an adherent of that particular theology. The hero is a man whose boyhood was used by his father as the basis for a series of Harry Potter-type books – except that it’s becoming more and more likely that the reverse is true. The grown-up Timmy Taylor is now on a search through the overlap of the world of stories and the “real” world, with the requisite Best Friend and Love Interest (although these two are more Preacher than Harry Potter), to discover if he’s real or fictional. As Carey’s concept grows ever larger and more ambitious, it may be that there isn’t much of a line between the two. After all, isn’t life just a story we tell ourselves?

* The Witching Hour was a late entry to DC’s re-invention of its suspense line, coming a year after House of Mystery and House of Secrets received slightly scarier stories and new hosts, the Cain and Abel of Biblical lore. These hosts, in a deviation from earlier horror hosts dating back to radio days, were actual characters, with their own storylines occurring around the stories they narrated. 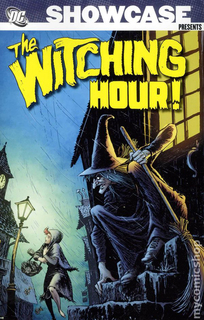 Witching Hour followed this new path in 1969, with three witches – a crone, a matron and a maiden, naturally – who argued among themselves in between telling stories. As these bookends were often illustrated by legends like Alex Toth and Neal Adams, you’d expect big things. However, as a new B&W collection demonstrates, that wasn’t the case.

Showcase Presents: The Witching Hour ($19.99) collects the first 18 issues, which were originally presented from 1969 to 1972. The artwork on the early issues is really quite impressive; DC was obviously putting its best foot forward. In addition to Toth and Adams, we’re treated to the likes of Nick Cardy, Dick Giordano, Mike Kaluta, Gray Morrow and Bernie Wrightson.

Unfortunately, there are also a lot of lesser lights, like Jerry Grandenetti , Jack Sparling and George Tuska, especially toward the later issues. And the bickering witches weren’t very entertaining, especially in big chunks like this.

But good intentions, and especially good art, can make up for a lot of flaws. “Witching Hour” falls on the higher end of my scale for this sort of fare, where mediocrity is generally the rule.

(although these two are more Preacher than Harry Potter)


Great observation. I hadn't realised it. The girl has the same 'agent rather than damsel in distress' role and I guess the friend also corresponds to a vampire in being a low-class journalist feeding off the misery of others!

Comment by Figserello on April 24, 2011 at 10:55pm
I wonder do they realise it is so close to the Preacher team?  Unwritten is like the polar opposite of Preacher, being so cerebral and literary.  A no-fisted tale to Preacher's two! :-)

I flipped through the Witching Hour Showcase and considered buying it. I agree with you that "good intentions, and especially good art, can make up for a lot of flaws." I have fallen into a tradition of reading such "horror" anthologies in "Essential" or "Showcase" format every year around Hallowe'en, so maybe this October...?