For everyone who developed a grudge against Tony Stark in "Civil War," it looks like they're getting their wish to see him humbled. Not only has he lost everything -- his company, leadership of SHIELD, the Avengers -- he's erasing his own mind so that Norman Osborn can't extract the secret IDs of every superhero on earth. In the last few issues, during the "World's Most Wanted" storyline, he's been getting dumber and dumber, as he runs from safehouse to safehouse just ahead of Osborn, going backwards in time with each suit of old armor he dons.

And apparently it's just going to get worse. Here's a piece of art I just couldn't keep to myself, from a story called "Stark: Disassembled," beginning in Invincible Iron Man #20 in November. If it looks familiar, there was once a similar scene of Tony Stark sitting vigil over Stever Rogers's body. 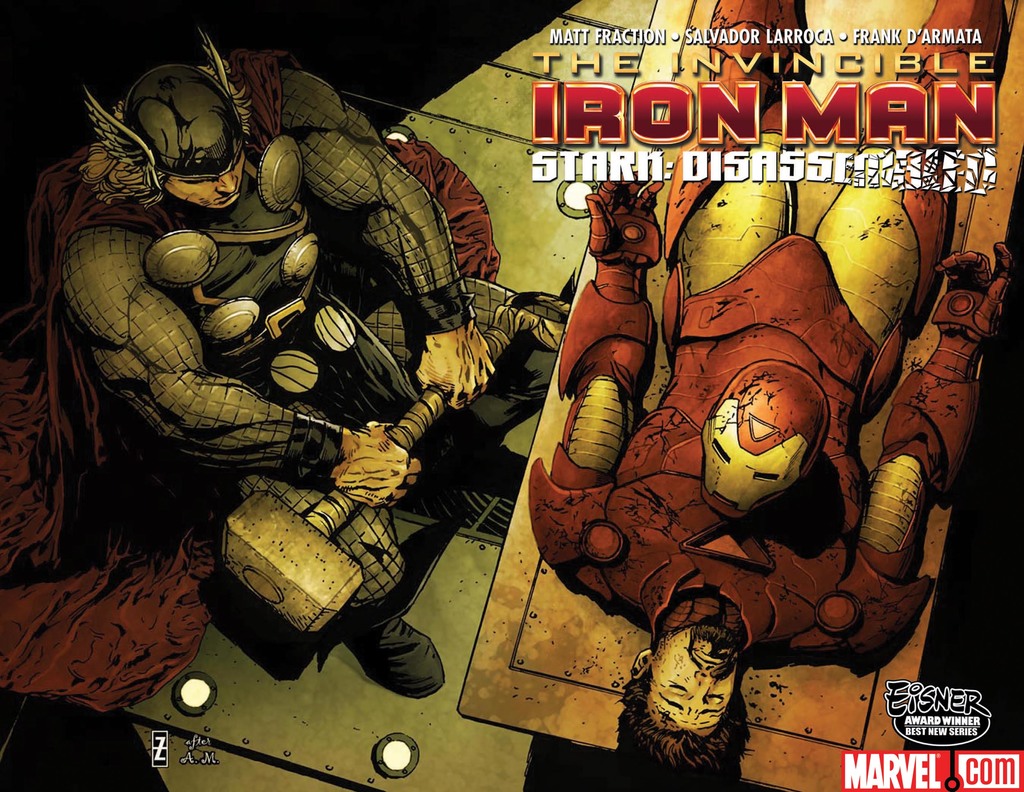 Nice to see, but I'm still not sure why Osborn can't call for another list to be drawn up.

Another list doesn't do any good unless the heroes volunteer their names again.  It's doubtful they will at this point.

Comment by The Baron on August 24, 2009 at 7:31pm
Mark, if you haven't already, you should definitely read the Dragon Ball andDragon Ball Zmanga , where characters who slaughter whole cities become good guys because they "stop being bad".

Then Osborn could hunt them down with HAMMER and the Initiative.

This reminds me of Steve Martin's old bit, "How to be a millionaire and not pay any taxes."

Step one: first, get a million dollars...

Comment by The Baron on August 24, 2009 at 7:46pm
It's a funny book - I hadn't really thought about it, before, but almost every bad guy becomes a good guy, but there's never any repentance or restitution or even any great moral epiphanies. Guys just stop trying to conquer the Earth and start defending it, instead..

I haven't really been following Iron Man - the only Marvel book I read these days is The Incredible Hercules, and Iron Man hasn't turned up there since I've been reading it. Osborn passed through a few issues back, though. How did Stark let himself get overthrown by a Spider-Man villain? Sounds a little sloppy, to me.

How did Stark let himself get overthrown by a Spider-Man villain?

And given all that background on Tony's activities it's kinda hard to work up any sympathy for the guy who started Osborn on his current rise to power.

But that doesn't mean he's not a sympathetic character.