Does “John Carter of Mars” sound more familiar? It should, because he’s a character that’s been around for exactly a century. His first story began in 1912 in the pulp magazine The All-Story, and was called “Under the Moons of Mars.” It was re-titled A Princess of Mars when it was released as a novel in 1917, with 10 more novels following. 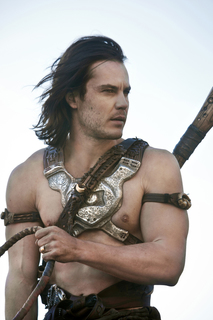 Still not ringing a bell? Then maybe the author’s name might help: Edgar Rice Burroughs. That’s right, the creator of Tarzan of the Apes.

Got it now? I’d hope so, because John Carter of Mars is relatively famous, which is why it’s a mystery why Disney decided to drop the “of Mars” for this film’s title, given that the ERB series is the great-grandfather of movies like Avatar and Star Wars. I can understand why Disney would avoid naming it “A Princess of Mars,” since a poorly received movie of similar name – one based verrrrry loosely on the ERB work – sank without a trace in 2009 (starring, believe it or not, Traci Lords).

But John Carter of Mars is a big fave in the sci-fi crowd, of which I am a happy member. The first book I ordered from the Science Fiction Book Club in 1968 was A Princess of Mars, and Dejah Thoris – the titular princess – aroused strange longings in my pre-adolescent self. I desperately wanted to be John Carter, a Civil War officer mysteriously transported to Barsoom – that’s what the natives call it – where he can hop around like a grasshopper and is much stronger than he should be, due to the lower gravity and thinner atmosphere. So even Superman owes a debt to John Carter, since his powers were the same in his 1938 debut, and his creators used the same explanation.

Speaking of Barsoom’s atmosphere, the first novel establishes that it’s slowly dissipating, suggesting that Carter might have moved through time as well as space – and that the planet is doomed to be as lifeless as it appeared to the scientists of the mid-1800s. But as a Confederate, John Carter is used to lost causes, and he won’t let that happen! Not with the gorgeous Dejah Thoris of the city-state Helium at his side! And his buddy Tars Tarkas, the mighty, green, four-armed Thark warlord! (Many creatures on Barsoom have extra limbs. The humans don’t have anything extra, except Dejah Thoris, who has an extra dose of va-va-voom.) In addition to trailblazing the whole interplanetary warrior thing (say “thank you,” Flash Gordon and Luke Skywalker), the John Carter books also moved in more-or-less real time, and eventually the novels were about the children of Carter and Thoris. One was named Carthoris, anticipating the celebrity portmanteaus of today.

While not as successful as his “big brother” Tarzan, John Carter has had his share of media exposure. He appeared in Big Little Books in the 1930s and ‘40s, and in a syndicated comic strip that ran from 1941 to 1943. He appeared in three Dell comics in the 1950s, as a backup in DC’s ERB books in 1972-73 and a four-issue miniseries at Dark Horse in 1996. The most successful series so far is John Carter of Mars by Marvel Comics, which ran 28 issues and three annuals from 1977 to 1979, and enjoyed the efforts of top creators like Marv Wolfman, Gil Kane and Dave Cockrum.

Currently the John Carter concepts are appearing in a variety of titles by Dynamite Entertainment, which brings us to another reason why you may have heard of John Carter lately. The character is in the public domain, but the Burroughs family’s company, ERB Inc., is suing Dynamite anyway for trademark infringement and unfair competition. 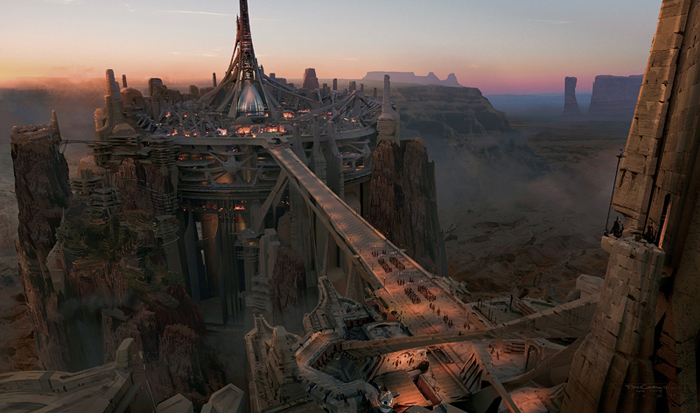 As to the movie, it features faces familiar to fans of genre fiction, like Willem “Green Goblin” Dafoe, James “Solomon Kane” Purefoy, Mark Haden “Sandman” Church and Mark “Sinestro” Strong. And if the trailers to John Carter bring to mind Avatar or Star Wars, just remember that Edgar Rice Burroughs is a well from which both James Cameron and George Lucas have drunk deep.

As did my younger self, who to this day still dreams of red skies, green warriors and beautiful princesses. 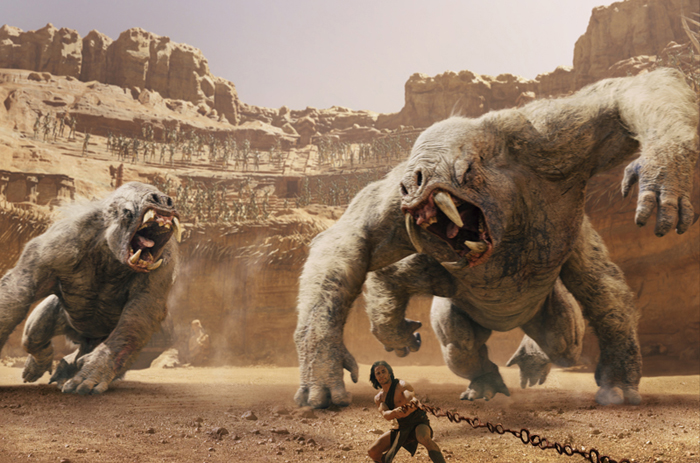 I too wondered about the deletion of the "of Mars" from the title, as John Carter seems an even more boring title than "Forrest Gump" or "Charlie Bartlett" (and, wasn't there a character on ER named John Carter?)

I've read a lot of speculation on why Disney dropped the "of Mars," but nothing official. It may be nothing more than trying to put distance between this movie and the Traci Lords vehicle. But the funniest speculation I read was a tweet that said, "They didn't call it 'A Princess of Mars' because boys hate princesses and girls hate Mars.'" I'm not even sure that makes sense, but it made me laugh.

Because, as young boys, we all hated The Princess Bride.  (eye-roll)

My name is Inigo Montoya. You killed my father. Prepare to die.

Having said that, I'm looking forward to seeing John Carter Sunday night, which is the soonest my wife and I can get to it.

Incidentally, I wrote two columns Sunday, with the intention of running a different one on 6/6 and this one on 6/13. But Monday night I saw a commercial that used a couple of my points (especially about Avatar and Star Wars) and I swapped them so John Carter would run earlier. Before it became redundant!

I'm on spring break next week and intend to see it one afternoon.

I doubt Disney deleted "of Mars" from the title solely because of A Princess of Mars; who remembers it? It's more likely they wanted to put some distance between John Carter and last year's Mars Needs Moms, which was a huge flop.

I saw an article ("Are Mars Movies Doomed?") that points out most recent movies about Mars or with "Mars" in the title have flopped: A Princess of Mars, Mars Needs Moms, Red Planet, Mars Attacks!, Ghosts of Mars, even The Martian Child, which was about a man adopting a troubled boy. No mention of the TV show Life On Mars, which also failed.

We no longer have any favourite Martians, it seems...

Comment by Doc Beechler (mod-MD) on March 8, 2012 at 7:40pm
Life on Mars, the BBC original series, was a huge hit and spawned the successful follow-up, Ashes to Ashes.

They changed the title because everyone knows that Men Are From Mars and Princesses Are From Venus.

And is it just me who finds it amusing to see Deja Thoris yet again described as 'titular'.