DC Entertainment may have saved the best for last in its ambitious revamping of its entire line of superhero comics – and it’s a book that doesn’t have a single superhero. 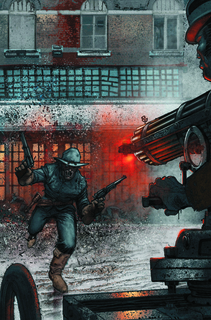 All-Star Western #1 arrived Sept. 28, taking the place of Jonah Hex on the schedule but still starring the lethal Wild West bounty hunter. The first story varies immediately from its predecessor by being set in the Wild East of the 19th century, Gotham City, a place that will host a certain other manhunter in the 21st century.

And if you think Batman has his hands full in the present, wait until you see his filthy, gritty, crime-ridden home town in the 1880s! And adding to Gotham’s Dickensian misery is a serial killer, dubbed the Gotham Ripper for his grisly work, who’s eviscerating prostitutes. A police force at the end of its rope asks psychiatrist Amadeus Arkham (whose descendant will build the famous asylum) to help, and he promptly hires Hex. That’s really all the set-up you need – that, and the first page showing Gotham in all its seedy glory, as flawlessly rendered by new artist Moritat (The Spirit).

One thing that hasn’t changed is the writers. Justin Gray and Jimmy Palmiotti wrote 70 issues of Jonah Hex (plus one graphic novel), all as done-in-one morality tales. In All-Star Western, however, they’re expanding to to multi-issue stories. The new freedom shows in issue #1, which takes its sweet time familiarizing new readers with Hex and Gotham, while amusing those who already know the score.

For one thing, this ain’t no clichéd fish-out-of-water story. Hex is still a shark among minnows, and he doesn’t waste any time showing the teeming vermin of Gotham’s alleys, bars and whorehouses who’s boss.

“It is a slightly different animal in that we’re structuring episodes on a larger scale,” Gray said in an interview, “but to be honest it is fun to have so much more room in a story using a character we’re intimately familiar with.”

Palmiotti agreed. “Telling a story in 22 pages can be difficult at times and there were many circumstances in the past that we wish we had extra pages to build up scenes and characters a bit more. With All-Star Western, we get to do just that … and in a spectacular way.”

Of course, a series with that title will have more than one star. Other Western characters will get the spotlight in back-up stories, starting with El Diablo in issue #2. That will be drawn by Hex alumnus Jordi Bernet (The Torpedo).

“It is my dream to always work with Jordi till the end of time,” Palmiotti said. “He is one of my personal favorites right now and we have definite plans aside from the El Diablo story.”

While characters like Bat Lash and Nighthawk have been mentioned, no details have been confirmed. Gray said they want to “keep a measure of secrecy to help bolster surprises down the road.” Of the other back-up characters, Gray allows “so far they only have the 19th century in common.”

Palmiotti, too, resists giving anything away – even location. “We will be experimenting with not only the characters in the DCU,” he said, “but we will be looking at other places and cities to have some fun with established and new characters.”

Which they have already begun with All-Star Western #1; the Gotham setting makes the story as much crime noir as Western.

“We’re adding some pulp elements that make sense with who and what Jonah is,” Gray said. Palmiotti added, “The surroundings and locals have changed, and now with Jonah in the big city of Gotham, he has to deal with the fact that being a loner is next to impossible. There are tons of opportunities here because of that to introduce not only cool stories but a boat load of new characters and situations.”

Some of which are the aforementioned back-up characters, some of whom may find themselves in the front of the book with Hex. “We have plans to eventually intertwine some of the stories and there will be guest stars in much the same way we used them during the Hex series,” Gray said.

“Honestly, each and every issue is going to have something different and special going on, so expect the unexpected,” Palmiotti added. “The format allows us to get a bit crazy from time to time.”

And as All-Star Western shows, Eastern crazy is just as good for Hex as the Western kind.

3. Jonah Hex is still the lead in All-Star Western #2 but is joined by a back-up starring El Diablo Courtesy DC Entertainment Inc.

Comment by Philip Portelli on October 8, 2011 at 9:08am
They could have easily had the story take place in old New York instead of Gotham but it does give the series a bit of freedom from historical constraints. And it lets them use names like Arkham and Cobblepot.

That was the thought process I went through also, Phillip. At first I thought putting Jonah in Gotham was a cheesy attempt to boost sales by loosely associating a Western title with the better-selling Bat-books. But then I read the book, and was stunned at how good it was, and I think some of the reason for that is what you say -- that they're not constrained by actual history, and can toss in elements of DC history as Easter eggs.

Comment by George on October 8, 2011 at 4:41pm
Reminds me of what happened to Marvel's Frankenstein in the '70s. They tried to boost sales by sending the Monster to modern-day New York, so he could fight superheroes. That's when the last readers bailed out.

Comment by Captain Comics on October 8, 2011 at 10:27pm
I had completely forgotten about that. Of course, all I really remember about that series is Mike Ploog on the first few issues.

Comment by Philip Portelli on October 9, 2011 at 7:10am
I don't think that was the case in Frankenstein Monster. He was in Marvel Team-Up and in Iron Man but no super-heroes appeared in his own title. That was more in Werewolf By Night.

I rather like that they're choosing to do some continued stories in this title. This latest incarnation of Jonah Hex, the title, did fine with the done-in-one approach, but some stories do need a little more space to breathe.

Comment by Philip Portelli on October 10, 2011 at 8:44pm
I agree. DC has a lot of different western heroes to put into various roles in this new Jonah Hex milieu. And being a coastal city, Gotham can have European ancestors show up as well. But I would rather not see a Wayne too quickly but why not Ra's Al Ghul?  Or Brian Savage AKA Scalphunter?