No American comics artist is better known for war stories than Joe Kubert, famed for “Sgt. Rock,” “Enemy Ace” and graphic novels such as Fax from Sarajevo. That regard is well deserved, and on full display in his latest GN, Dong Xoai, Vietnam 1965 (DC Comics, $24.99). 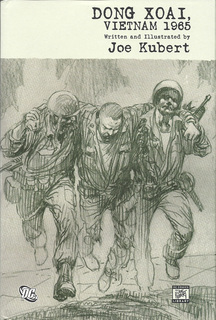 Dong Xoai is based on a true story, about a team of Special Forces soldiers sent on a simple observation and assistance mission to Bu Gia Map, a village near the Cambodian border. But in a classic case of mission creep – or perhaps Army SNAFU – the team ends up leading the defense of the regional base of the title against a huge Viet Cong offensive determined to wipe it off the map.

Kubert’s writing occasionally devolves into rah-rah jingoism, but overall it’s an impressive research and development effort. Kubert delves into official reports, news items and the memories of the survivors to reconstruct a battle that is perhaps emblematic of a brave but often blindsided and hamstrung U.S. effort in that troubled land. (Some of this research material, to my delight, is included.)

But even more impressive is the art, presented as unfinished pencils, which is simply a tour de force of Kubert’s finely honed talent. This approach is also conceptually significant, as it reinforces the gritty, raw nature of the environment while putting the reader at a dreamlike remove from events that are, after all, history.

No one story can summarize America’s 11-year nightmare in Vietnam. But this one comes close, demonstrating American bravery, South Vietnamese corruption and inefficiency, Viet Cong determination – and a situation spiraling out of anyone’s control. Delivered by a master like Kubert at the top of his game, it’s a must-read for comics fans and historians alike. 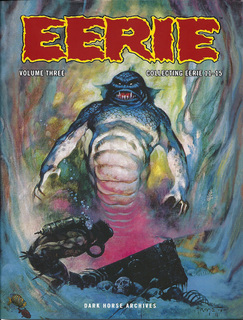 * Warren Publishing burst on the newsstands in the early 1960s with horror magazines that virtually re-created the fabled EC Comics bullpen and approach. But the quality of Creepy and Eerie fell off a cliff around 1967, a fact most comics fans know.

Fans like popular comics writer Gail Simone (Secret Six, Birds of Prey), who calls the late 1960s a “dark period” for Warren in a foreword to the new hardcover reprint Eerie Archives Vol. 3 (Dark Horse, $49.99). Simone describes the contents in this book – from Eerie #11-15, 1967-68 – as “story after story by artists who either left comics or never really managed to get a proper toehold. Writers whose names I do not recognize.”

But oddly, Simone says this as praise. Stories by creators with no reputation to protect, with nothing to lose, can be, she says, “a little grubbier, a little grittier, and a little … dare I say it? A little eerier.”

To an extent, I agree with her. Sure there are clunkers in this collection (as there are in any anthology), and perhaps a noticeable lack of polish. The covers are pretty weak, and several stories are painfully amateurish.

But Eerie #11-15 also had early work by Jeff Jones and Tom Sutton, which ain’t shabby. And these issues were themselves chockablock with reprints from Warren’s earlier years, so there are a lot of Archie Goodwin stories, and art by the likes of Reed Crandall, Johnny Craig, Alex Toth and Joe Orlando.

So if Simone hadn’t told me I was reading material from the “dark period,” I might not have noticed. You might not, either. 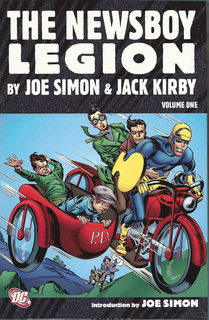 * Joe Simon and Jack Kirby were the rock stars of comics in the 1940s, men who dominated every genre they tackled, and invented quite a few along the way. One such genre was the “kid gang” book, exemplified by The Newsboy Legion Vol. 1 (DC Comics, $49.99). This volume – one of two which will collect the entire series – exhibits all the hallmarks of a Simon & Kirby production: an inventive premise, dynamic art, fast-moving stories and more than a little humor.

Admittedly, the bar was set pretty low in the ‘40s, where to call most of the work amateurish is being kind. But even so, Simon & Kirby produced work that holds up well. This is a fun read, especially the banter between the newsboys who lived in Suicide Slum and their legal guardian, patrolman Jim Harper – whom the boys suspected of being the superheroic Guardian, which they could never prove.

Meanwhile, there’s tough talk and fisticuffs and mysteries and fun galore. With kids, and for kids, of all ages.
Contact Andrew A. Smith of the Memphis Commercial Appeal at capncomics@aol.com.

Comment by George on May 28, 2010 at 7:56pm
I enjoyed the Newsboy Legion reprints in the back of Kirby's comics in the early '70s, mainly because it gave a sense of life in New York in the '40s (where everyone talked like James Cagney or Edward G. Robinson). How much of that came from Kirby's scrappy youth in the Lower East Side, and how much from Warner Bros. movies, I don't know. Probably a bit of both.

The series was a bit unique in dealing with slums, tenements and working-class life in a big city. Well, it was unique if you ignored The Spirit ...

Comment by Figserello on May 28, 2010 at 7:20pm
Kubert did a newspaper strip about the Green Berets circa 1966 (just before the anti-Vietnam War protests got into full swing). Does anyone know if it has ever been reprinted?

It has indeed. As B&W comicbook 'pamphlets'. I picked up a few of them cheaply a few years ago because of Kubert's name but never got around to reading them. Possibly AGW or one of those classic reprint companies.

Comment by Philip Portelli on May 28, 2010 at 7:00pm
And they never obsessed over it or concocted complicated schemes to trap him or force him to admit it. It was always, "We know you're the Guardian!" "No I'm not!" "Okay whatever makes ya happy!"

Comment by Philip Portelli on May 28, 2010 at 6:31pm
While the Newsboy Legion never got their own book like their "cousins", the Boy Commandoes, they were revived in the 70s and again in the 90s. The stories I read, that were reprinted in "Jimmy Olsen" had a spunky energy and rough-hewned charm. Plus there was the Guardian who was cooler than Rip Carter and more personable than Captain America (his "cousin")!

Comment by Captain Comics on May 28, 2010 at 6:05pm
Lime Coke, I agree that the cover above (by Frank Frazetta, of course) is terrific. In fact, when I was growing up, a local artist had re-created it on the side of a building here in Memphis at about 20 feet tall. So, we're not the only ones it impressed!

But here's the thing: That's the cover from Eerie #3 -- which, obviously, was in volume one, and not in this volume, which collects Eerie #11-15. Which should give you a clue how pathetic the covers are in this collection, that none of them were adjudged good enough to be on the front.

I didn't include it in the story, but the reason quality dropped off for Warren is that they ran into money problems after several years of paying the best rates in the industry. So suddenly they could no longer afford talent like Frazetta, who did not come cheap.

Comment by George on May 28, 2010 at 5:35pm
Kubert did a newspaper strip about the Green Berets circa 1966 (just before the anti-Vietnam War protests got into full swing). Does anyone know if it has ever been reprinted?

Comment by Jason Marconnet (Pint sized mod) on May 28, 2010 at 4:23pm
The covers in that volume of Eerie may be weak, Cap. But I'm digging that particular cover on the volume. I'm not a horror fan but most of the covers I've seen from Eerie and Creepy are pretty cool, imo.

Lee Houston, Junior replied to Steve W's discussion A Cover a Day
"Running late, again, but anyway... There will be at least as many collections and remembrance…"
56 minutes ago

Randy Jackson replied to Randy Jackson's discussion How do the Wakandans mine Vibranium?
"Thanks. I guess that answers my question. "
7 hours ago

Richard Willis replied to Steve W's discussion A Cover a Day
"Another wrap-around. I don't like his Hal Jordan."
7 hours ago

Jeff of Earth-J replied to Steve W's discussion A Cover a Day
"Took down my previous post when I realized it was a dupe. Realized no posted this one yet."
7 hours ago

Philip Portelli replied to Steve W's discussion A Cover a Day
"Supergirl through the years!  (btw & IMO only, I don't think that Dick Giordano was a…"
10 hours ago