Latest 'Hardy Boys' GN sets high standards, latest Vertigo Crime and others not so much

The Teetering Tower of Review Stuff is perilously high, so let’s bang through some of it: 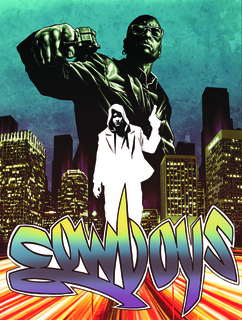 * I usually enjoy DC’s “Vertigo Crime” line of mature-reader graphic novels, but the latest needed some tighter editing. Cowboys ($19.99) features two different levels of law enforcement infiltrating the same criminal organization, a street cop from the white-collar side down, and an FBI agent from the street-level side up. Neither is aware of the other, and lethal mistakes are inevitable. That’s a pretty good concept for a noir-ish crime mystery, but author Gary Phillips takes waaaay too long setting it up, and since both cops are wife-cheating, smart-mouth jerks, and all the supporting characters are equally venal and unlikeable, and the criminals are the worst kind of scum, it’s hard to care what happens to any of these people. Fortunately, the art by Brian Hurtt is no-frills, crystal-clear storytelling, and I wouldn’t mind seeing more of it.

* Archaia’s Okko is about a band of demon hunters in a fictional place very much like Edo-era Japan called “Pajan” where the supernatural is very real. It’s a sort of cross between a samurai epic and Dungeons & Dragons, with our little team consisting of a ronin swordmaster; a drunken, magic-using cleric; a mysterious, seven-foot warrior who never removes his demon mask; and the cleric’s teenage disciple, who serves as the reader’s POV, narrating the stories from his old age. In the latest collection (Okko Vol. 3: The Cycle of Air, $19.95), our glum little group fights another demon-hunter who is virtually unbeatable for reasons I won’t disclose. It’s inventive and fun, although writer/artist Hub could be a bit more forthcoming with exposition; for example, it took three volumes for me to figure out that the gang was fighting supernatural agents on purpose! Also, the artwork – while very intricate, plausible and faithful to the historical era, is over-colored and very, very dark. So dark that my over-50 eyes struggled with the immense amount of detail, and I have to take the word of other critics that it’s as good as they say it is.

* The “Hardy Boys: The New Case Files” series by Papercutz is meant for readers much younger than me, and yet I’m enjoying it probably more than I should. Full credit goes to author Gerry Conway, who has spent decades scribing comics and television. Conway’s as good as they come, and has a light touch that never lets the reader see the little man behind the curtain. The latest book, Break Up! ($6.99), is a case in point; friction between Joe and Frank has been skillfully foreshadowed, and you fully expect the boys to end their famous team. But Conway maintains suspense by keeping all his balls in the air, until the story seems to find an organic but unforeseen conclusion. I wish comics written for adults were this good.

* Abrams ComicArts’ Empire State ($17.95) is subtitled A Love Story (or Not), and that pretty much sums it up. It’s the story of a mismatched pair of friends in Oakland, Calif., who both journey, for different reasons, to New York City. First it’s the boy, an unsophisticated but good-hearted dimbulb who tries out for a Google job he is grossly underqualified for; then it’s the girl, a chubby, intelligent, prickly, Jewish girl who moves to “the modern Rome” because she fits in better there. The boy, deciding he’s in love with what had been his best friend, again travels to New York, where the yawning chasm between the pair’s intellect, ambitions and values is thrown in high relief. Drawn in a cartoony style by writer/artist Jason Shiga, the storytelling is excellent and easy to follow, although Shiga alternates coloring everything in shades of red or shades of blue for no reason I can figure out. Perhaps I just didn’t care to figure it out; the ending seemed telegraphed to me from the first, and I found the journey to that expected conclusion to be rather dull. I did find the art interesting, and I bet readers of a more romantic bent will really dig Empire State. It’s good work, just not my thing.

I’ve already reviewed the second volume of Vanguard’s Frank Frazetta library, but I just received the first, and it’s worth a mention. But only a mention, as poster Jeff Plackemeier said all that needs to be said about The Complete Johnny Comet ($49.95) on my website. Let me just direct you there.

Comment by Captain Comics on July 8, 2011 at 1:43pm
My wife has already informed me that she's going to read Miss Fury (which came yesterday) before I do. She says "She's got a great fashion sense." Seriously, that's what she said.

Comment by Mark Sullivan (Vertiginous Mod) on July 9, 2011 at 12:44pm
I have to say I'm not surprised that Cowboys wasn't quite up to the usual Vertigo Crime standard. Gary Phillips hasn't written anything I've liked very much. I've read his Oni GN Shot Callerz and his Vertigo miniseries Angeltown, and they both were trying too hard to be "street." I agree about Brian Hurtt; I liked the work he did on Queen & Country.

Comment by Captain Comics on July 9, 2011 at 4:52pm
I forgot about Hurtt on Queen & Country (if I ever knew it), which was a book I really enjoyed.