'Lovecraft,' 'I, Vampire' are top-notch scares for October

It’s October, so the scary is coming thick and fast – especially in books and comics.

Topping this week’s list is The Lovecraft Anthology Volume II (SelfMadeHero, $19.95), a collection of horror writer H.P. Lovecraft’s short stories adapted to comics.  Volume I appeared in April, and was a similar quality anthology, using a variety of mostly A-list writers and artists to adapt Lovecraft’s shorter works. 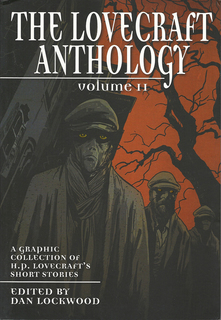 For the uninitiated, Lovecraft is famed for horror, fantasy and science fiction stories, published primarily in the 1920s and ‘30s in pulp magazines like Weird Tales. Lovecraft’s overarching themes were those of forbidden knowledge so awful it drives the bearer insane, of the universe essentially being indifferent or actively belligerent to the existence of man and of our helplessness in the face of these threats. Often these themes manifested in stories about ancient, inhuman elder gods seeking entry to our dimension to rule/rape/eat us, with many of these stories tying together, some of them known to fans as “the Cthulhu mythos.”

I think my disaffection was largely born of Lovecraft’s guiding philosophy as a horror writer, that it’s better to suggest something horrible than to describe it, letting the reader’s imagination scare him far worse than anything the writer can do. I agree with this philosophy in principle, especially for horror movies, where the unknown – and un-shown! – is far more terrifying to me than a guy in a hockey mask. But Lovecraft’s vagueness didn’t launch my imagination into overdrive. Instead, I wanted a few more nouns and a few less adjectives, so I could figure out just what the heck was going on.

My problem is completely obviated by translating these stories into comics. Here the various artists have a tightrope to walk, in showing enough for literalists like me to understand what is going on, but not so much as to rob us of our ability to scare ourselves. And these books have done that so admirably that I am now, at long last, a Lovecraft fan.

Meanwhile, DC Comics has resurrected an old concept in a new series, with the first six issues collected as “I, Vampire Volume 1: Tainted Love” ($14.99).

“I … Vampire” originally ran in early 1980s issues of House of Mystery comics, the story of Andrew Bennett, a 400-year-old vampire at war with his former lover (and his first victim), Mary (called “Queen of Blood”). Frankly, it wasn’t very good.

The new I, Vampire uses essentially the same basic storyline and characters, but is immeasurably better. For one thing, Mary is given an actual personality – and, like all good villains, she is given a strong motivation for her to believe she is justified in her actions. This is due to Josh Fialkov, a writer whose 2009 graphic novel Tumor impressed me by using the tropes of crime noir in ways I’d never seen before. Fialkov also guest stars Batman (virtually a requirement these days) and provides a shock ending that makes me ridiculously eager for Volume Two.

Finally, I can’t let the season go by without mentioning the unashamedly weird but delightful Horrorgami: Creepy Creatures, Ghastly Ghouls, and Other Fiendish Paper Projects (Running Press, $13). Just like you’d expect from the title, “Horrorgami” is origami for Halloween, with instructions for creating 25 various creatures out of folded paper!

I have never tried origami, but these instructions were clear enough even for my fumbly fingers. And while some of these “creatures” don’t work for me (“Ghastly Raven” isn’t ghastly at all, and “Phantom of the Opera” is kinda lame), others are surprisingly effective. “Hooded Grim Reaper,” “Maleficent Medusa” and “Stupefying Spider” are not only amazingly recognizable for what they’re meant to be, they might actually be a little scary (in a fun way) for youngsters. All that, plus the book includes Halloween-colored paper in the back to get you started.

Horrorgami is one of those things where you wonder why it’s never existed before. Now that it does, you owe it to yourself to give it a try.