Marvel and DC movies are biggest news out of Comic-Con

Comic-Con International: San Diego this year was its usual bad self, an immense Christmas party for nerds, geeks, cosplayers and fans of all stripes. But two movie announcements stole the show.

While Captain Comics didn’t personally attend the Con, the two announcements have been widely reported. And in case you have a life and didn’t spend the weekend glued to Entertainment Weekly radio, Newsarama.com and various publisher websites as the Captain did, here’s the poop!

DC Entertainment went first July 21 at San Diego Convention Center in the early afternoon, announcing the official Man of Steel sequel. But there was a shocking kicker: Man of Steel 2 – or whatever it will be called -- will have a co-star: Batman.

And the way the news was announced implied strongly that it wasn’t going to be a friendly team-up by DC’s two biggest stars. Harry Lennix, who played General Swanwick in Man of Steel, launched the announcement with a quote from the 1986 Dark Knight Returns graphic novel: “I want you to remember my hand at your throat. I want you to remember the one man who beat you.”

Long-time fans remember a time when the Batman-Superman friendship was a cornerstone in the DC Universe. The two characters began sharing adventures in the 1950s when reducing page count in an anthology called World’s Finest Comics forced the two to appear in a single strip, rather than drop one altogether. That unlikely pairing proved to be enormously popular, and the two teamed up regularly in WFC until the book was canceled in the mid-1980s. That partnership was a given in all other DC comics, including the Super-books, the Bat-books and Justice League of America.

Interestingly, there was a long run of World’s Finest where covers routinely depicted the pair at odds. It’s somewhat ironic now, because the idea was to entice readers to plunk down their money to see what on Earth could force these two friends to fight.

The reason it’s ironic now is because of the aforementioned Dark Knight Returns. Frank Miller’s edgy graphic novel envisioned a dystopian future where Batman was an aging but brutal crypto-fascist, and Superman was a government flunky. In the book’s climax, Uncle Sam sends the Man of Steel into Gotham to take down the Bat, and what ensued was something no one had ever done before – a real, knock-down, drag-out, no-mind-control-needed fight to the death between the two most famous superheroes in the world. 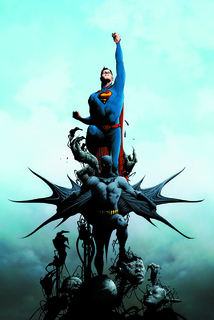 Dark Knight Returns was both a commercial and critical darling, and marked the beginning of a long stretch of DC comics where the “World’s Finest team” was no more. DC re-launched their entire comic-book line in 1986, and in this new reality, Batman thought Superman was too namby-pamby, and Superman disapproved of Batman’s methods. They were frequently at odds, with the Dark Knight constantly prepared to take down “the big blue Boy Scout” should the need arise.

However, we may be emerging from that long, dark tunnel. The old World’s Finest friendship is being rekindled. DC once again re-launched their whole line in 2011, and in the current reality DC has established that Batman and Superman, while still retaining nearly diametrically opposed personalities, are long-time crime-fighting collaborators. Those adventures are depicted in a new ongoing book called, naturally enough, Batman/Superman.

While fans were still reeling from that announcement, Marvel Films stepped up to the plate next and sent one over the right-field wall.

In a darkened Hall H, the voice of Tom Hiddleston (who played Loki in Avengers) boomed over the crowd. “Humanity, look at you now!” Newsarama reported. “Huddled in the dark like beasts!” Lightning (on the big screen) flashed, the lights came up and there, on stage, in full Asgardian regalia, was Hiddleston himself. Needing no microphone to reach the cheap seats, the theatrically trained, 2005 graduate of the Royal Academy of Dramatic Art had the crowd chanting his name faster than you can say “Mjolnir.” (That’s Thor’s hammer, by the way.)

Then came the announcements. Thor: The Dark World premieres in November, and a clip from that movie held no surprises, but a lot of action.

Up next was a discussion of Captain America: The Winter Soldier (April 2014) and to the audience’s roared approval, seems to be something of an ensemble movie, teaming Cap with Black Widow (Scarlett Johansson), Nick Fury (Samuel Jackson Jr.), Maria Hill (Cobie Smulders), The Falcon (Anthony Mackie) and Cap’s long-running comic-book girlfriend, Agent 13 (Emily VanCamp). They face a clutch of classic Cap foes, including not only the Soldier of the title (a brainwashed Bucky Barnes), but Nazi scientist Arnim Zola, brutal terrorist Crossbones and even Batroc the Leaper, who fights with his feet. (No, seriously, it’s a French martial art called la savate. Honest!)

Marvel’s next movie is Guardians of the Galaxy (August 2014), and the membership of this oddball team seems finalized. GotG, as some fans call it, started out in the ‘60s with a cast of unimpressive characters set in a near future where Earth had been conquered by aliens. That concept was never very successful, and in recent years a new team with that name has emerged, whose quirky characters have been embraced more enthusiastically. Some of those who include Groot, the tree-like being whose entire vocabulary consists of “I am Groot!”; Rocket don’t-call-him-a-racoon, a firearms-loving rodentine alien who happens to look like an Earthly racoon; Gamora, deadliest assassin in the galaxy; and Star-Lord, an Earthman whose presence on the team is too complicated to explain. Amazingly, one of the original Guardians will be in the film, the Alpha Centaurian named Yondu, who will be played by Michael Rooker (Merle on The Walking Dead). 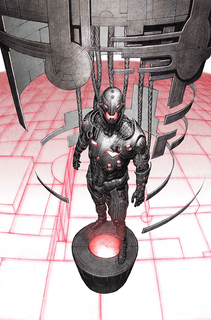 Finally, the Marvel panel reached what everyone was waiting for: Avengers 2. And while they didn’t tell the audience much – just the name – it was enough. Coming in 2015, the Avengers sequel will be named Avengers: Age of Ultron.

Ultron is an important name in Avengers canon. First appearing in the 1960s, Ultron is an artificial intelligence created by Hank Pym, the founding Avenger then known as Ant-Man. Pym has gone through a lot of names/concepts (appearing at different times as Ant-Man, Giant-Man, Goliath and Yellowjacket), and part of that is attributed to Ultron, who used an “encephalo ray” to control Pym in his quest to destroy humanity and replace it with androids like himself. Part of that plan also included creating The Vision, an android with connections to the original Human Torch and an Avenger named Wonder Man; Vision remains one of the most popular characters in the series’ history.

And, finally, Marvel just finished a storyline called Age of Ultron where things didn’t go so well for the Assemblers. How not so well? You’d have to read the book – or, quite likely, wait for the movie.