Marvel Entertainment announced a new Captain Marvel at WonderCon March 17, a character with a lot of strikes against her. But most fans are cheering.

The major problem is that the character can be confusing. To most folks, “Captain Marvel” means an entirely different character from a different company: Billy Batson, the boy who shouts “SHAZAM!” to become a light-hearted adult superhero in a red costume. He was really big in the 1940s, rivaling Superman in sales. 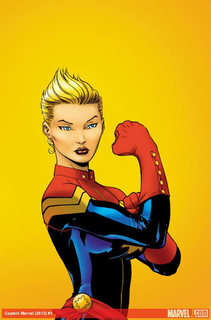 Which was his doom. National (now DC) Comics, publishers of Superman, sued Fawcett Publications, publisher of Captain Marvel, for copyright infringement in 1940. It appeared to be a weak case to us non-lawyers, based on both  characters having similar powers (although Captain Marvel’s were magical, and based on ancient gods and heroes) and similar civilian identities (Clark Kent was an adult reporter for the Daily Planet newspaper; Batson was a boy reporter for radio station WHIZ-AM). Neverthless, the case dragged on until 1953, when Fawcett settled out of court and got out of the comics business.

With the original Captain Marvel kaput, the name was up for grabs. MF Enterprises used the name for an android superhero in 1966, whose power was to split his head, legs, arms and fingers off his body, to fly off independently and fight bad guys. That’s a really stupid super-power – how do disembodied limbs fly, anyway? – but also really creepy, and that Cap only lasted four issues.

Also in 1966, Marvel Comics decided to appropriate the name for a new superhero from outer space – a captain in the alien Kree military, whose real name was Mar-Vell. That character died in 1981 (and, amazingly, remains dead), but the name was used again at Marvel for his son Genis-Vell (now dead), his daughter Phyla-Vell (also now dead), an unrelated light-based superheroine named Monica Rambeau (now code-named Pulsar), another Kree named Noh-Varr (now code-named Protector) and a Kree historian named Medi-E-Vell. OK, I’m kidding about that last one, but you can see the name gets around.

Before most of that, DC had obtained the rights to the original Captain “Shazam” Marvel, and began publishing his adventures in 1971. Ironically, they were unable to name their Captain Marvel comic book “Captain Marvel,” because Marvel held the trademark. So, while DC could still use the name “Captain Marvel” for the character, they had to use something else for the title of his books – usually “Shazam!” or a variant thereof. Recently, mirroring the actions of Fawcett almost 60 years ago, DC has simply given up on the Captain Marvel name and just renamed the character “Shazam.”

Meanwhile, a supporting character in the original Marvel Captain Marvel series (I told you it’s confusing), got super-powers and her own book in 1977, Ms. Marvel. This character, named Carol Danvers, had previously been an Air Force captain, an espionage agent and Mar-Vell’s girlfriend. When Ms. Marvel got canceled, she got new powers and called herself Binary, then lost those powers and became Warbird, then shifted back to Ms. Marvel for a recently canceled series. And it is THAT character that will once again be Marvel’s Captain Marvel in July.

Another strike against Captain Marvel is that titles starring females traditionally have a hard time in the male-dominated comics landscape. Currently Marvel has no solo titles – zero – starring women.

There aren’t a lot of female writers in comics, either, but the new Captain Marvel has one: Kelly Sue DeConnick, best known for manga translations. On Marvel.com, she described the character this way:

“My pitch [to Marvel] was called ‘Pilot’ and the take can pretty much be summed up with ‘Carol Danvers as Chuck Yeager. Carol's the virtual definition of a Type A personality. She's a competitor and a control freak. … She'll have to figure out how to be both Captain Marvel [ital] and [end ital]  Chuck Yeager – to marry the responsibility of that legacy with the sheer joy being nearly invulnerable and flying really [expletive] fast.”

And the pluses for Captain Marvel? First, the more non-whiny, unapologetically strong women in comics, the better -- as a role model for girls, and an education for boys. Also, Marvel needs an iconic female standard bearer like DC’s Wonder Woman, and what could be better than one with “Marvel” right in the name? Also, the old “Ms. Marvel” handle always seemed a little archaic to me – a throwback to the ‘70s that makes her sound like a spinoff.

Finally, Carol Danvers is just a great character. Like other fans, my reaction to her solo book is “It’s about time!”

Interesting stuff.  I'm unfamiliar with Kelly Sue DeConnick, but I like her pitch of Carol Danvers enough to give this a try.  Has the artist been announced?

Comment by Figserello on April 1, 2012 at 6:04pm
Zero solo titles starring a female lead. What a corner we've painted ourselves into.

I thought her first costume was good an I loved black one that she's worn for years. The new look, as someone has already pointed out, is very like Alan Moore's Marvel Woman.

That character was a caring NHS doctor in her civilian guise, but fighter pilot is more badass!

Hal Jordan's brief tenure as a USAF fighter pilot showed that there were certain pitfalls to be avoided when dealing with that role in a superhero comic. Of course, the Silver Age guys had that worked out with their usual elegance, and he was a Test pilot, not a fighter pilot. Whether Carol will be a test pilot for a private company, or the USAF will make a big difference to the tone of the series. Although, y'know she'll still be working for arms dealers.

Test pilot is a kinda redundant occupation in a world where Reed Richards cobbles something together that flies to the other side of the globe in less than an hour!

Carol Danvers deserves to be Captain Marvel. This is the first I've heard of this news. I'll definitely give this series a try.

I think this is a smart move by Marvel.  Carol is an obvious heir to the name, IMHO.  De Connick has shown she can write with "Osborn" and I'm hoping she gets a chance to take a long run at this.

My only gripe is WHAT AN UGLY COSTUME!  Am I the only one who thinks this is eye-bleeding bad?

I like the costume.  Sadly, most female costumes in comics look like they wouldn't be out of place in a Victoria's Secret catalogue.  This one would probably pass muster with my wife and daughter, as opposed to, say, the new Harley Quinn getup in Suicide Squad. (Aside, my wife loves classic Harley Quinn)

Carol Danvers as Captain Marvel is fine by me but I am leery, considering what has happened to the first female Captain Marvel, Monica Rambeau. She went from being a major part of the Avengers to an afterthought with altered powers and new names. If Carol is allowed to remain Captain Marvel without all the skeletons in her closet popping back up and go forward, and not dumped the moment some other writer wants to bring back Mar-Vell or Genis, she could become the female star that Marvel has been missing all this time.

Btw, Fear Itself: The Fearless is practically a Valkryie solo series.

I'm not sure if the mask, in the lower right image, will be part of the standard costume or not. Making Carol Captain Marvel strikes me as a good solution to the problem of what to do with the name, but I don't think it will be enough to make Carol a real star.

Jamie McKelvie has posted that he designed the costume, and that her helmet forms when she needs it. He also has images of the costume by himself (I believe) and Terry and Rachel Dodson where I think it comes off better than in the covers in the above article, which are apparently by Ed McGuinness. See the posts for 17-31 Mar 12.

I love McKelvie's work there.  He is a marvelous artist, who knows how to give the images room to breathe.  The costume is a pretty good one.  She looks like she means business.

I might buy it if the art is by McKelvie.  Ed McGuinness can also be a wonderful artist, but needs to choose his projects better.