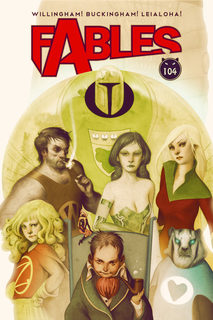 There’s a saying in the comic book world that every fan wishes they were a comic book writer.  Supposedly, the axiom is exponentially true for comic book columnists.  Those who write about comics wish they wrote comics themselves.  However, lately, I’ve gotten the impression that the reverse is also true.  I think that a lot of comic book writers secretly wish that they that had my job.  (By job, I mean the thing I do on my day off for fun and for free.)

Some writers, and former writers, are able to double as columnists.  Peter David maintains his “But I Digress” column for Comics Buyers’ Guide.  Jason Aaron and Ron Marz write columns for Comic Book Resources (“Where the Hell Am I” and “Shelf Life” respectively).  Grant Morrison outdid every comic book pundit with his non-fiction book Supergods.  That’s only a small sample.

Yet a lot of writers don’t have that kind of outlet.  Therefore, in a time-honored tradition, several writers have taken to writing about comics in comics.  This can be done well.  It can be done humorously or self-reflectively.  This can also be done poorly.  It can disrupt the narrative or upset the feel of the book.

Bill Willingham’s Fables is, unfortunately, an example of botched commentary.  “Fables” has always been something separate.  It’s not a superhero title and it’s not part of a shared superhero universe.  As such, it was a wonderful alternative for both superhero and non-superhero fans alike.  But, this year, Fables tried to be something it wasn’t: a superhero book. 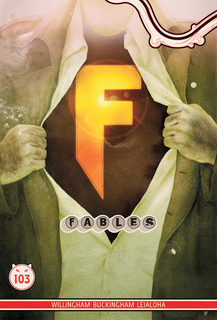 After failing to defeat Mr. Dark on numerous occasions, Pinocchio had the idea that the only way the good Fables could beat him was to form a superhero team.  So Pinocchio ran his fellow Fables through a series of superhero auditions.  They devised costumes and codenames.   Pinocchio argued with Ozma for the inclusion of certain Fables based on their ability to fulfill comic book conventions.  Ozma, unaware of those conventions, criticized them and exposed their pointlessness.  The ongoing arguments became a running commentary on superhero clichés and comic books in general.

Theoretically, it could have worked.  Regrettably, it didn’t.  Although it wasn’t out of character for the perpetually childish Pinocchio to be a comic book fan, it was a completely new addition to the character.  It felt like an insertion, imposed on the character for the sake of this particular story.  It was also completely new for there to be any reference to superheroes or comics at all.  Willingham failed to establish that this world even had comic books, let alone the well-defined superhero genre of our world.  The tone was therefore inconsistent with the title up to that point.  It wouldn’t have been nearly as out of place in the sister title, Jack of Fables, which routinely commented on the conventions of literature and myth.  But there was no precedent for it in Fables.

Yet the biggest problem was that the whole idea of the superhero team turned out to be irrelevant.  Mr. Dark was defeated, but not by the superhero team.  They didn’t even get into action before they were disbanded.  Perhaps that was Willingham’s intentional comment on the uselessness of superheroes.  Whatever the reason, it was also a failure of Story-Telling 101.  Willingham introduced a huge digression that had no eventual impact on the story or on the characters in it. 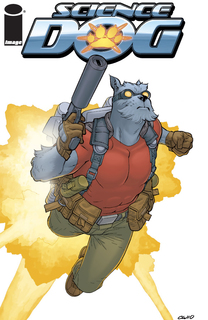 Happily, Robert Kirkman’s Invincible is an example of how this can be done well.  Like “Fables,” “Invincible” has always been something separate.  Invincible is an independent superhero.  Although he’s had a few spin-offs (Atom Eve, Guarding the Globe) and guest-stars (Tech Jacket, Savage Dragon), Invincible is primarily a self-contained story.  This year, Kirkman took a brief moment to comment on the state of comic books and superheroes.

Invincible had spent almost a year in space fighting the Viltrumite Empire.  With the war over, Invincible returned home.  However, after his long absence, Mark Grayson (aka Invincible) had to put a lot of the pieces of his life back into place.  He reconnected with his girlfriend.  He visited old friends.  He checked in on his former college roommate.  And he stopped by his local comic book shop to pick up a pretty full pull list.  While there, Mark talked to other comic book fans about what was going on and what he had missed.

This little bit of commentary fit right in with Invincible.  Kirkman had long-established that comics were a part of this world and a part of Mark’s life.  Mark’s father wrote superhero novels in his secret identity.  Mark was a big comic book fan- he even had a poster in his room of his favorite hero, Science Dog.  Kirkman had also previously bent the wall between superhero fiction and superhero commentary.  He had Invincible fight his fictional hero, Science Dog, before revealing that this S.D. was a shape-shifter or something like that.  So it was in character for Mark Grayson to have an opinion on comic books and well within the established tone of the book.

Kirkman was also wise to keep his hand partially hidden.  As readers, we might think that Mark or the other characters were acting as a mouthpiece for the writer.  But Kirkman left just enough room for us to acknowledge that Kirkman’s opinions were maybe not the same as his characters.  In that way, Kirkman was able to have his cake and eat it too.  He wrote about comic books in a comic book in a way that was consistent with the established setting of that title.

>I always liked the old idea that in Captain Marvel's universe Superman was a comic and vise versa./p>

I was never aware of that, where did that show up? That being said, don't forget that the Earth 1 Flash was inspired by the Earth 2 Flash who he thought was a comic.

>Yet the biggest problem was that the whole idea of the superhero team turned out to be irrelevant.  Mr. Dark was defeated, but not by the superhero team.  They didn’t even get into action before they were disbanded.  Perhaps that was Willingham’s intentional comment on the uselessness of superheroes.  Whatever the reason, it was also a failure of Story-Telling 101.  Willingham introduced a huge digression that had no eventual impact on the story or on the characters in it./p>

I was thinking about this myself the other day. I was pretty disappointed in the story, like you, because it just turned out to be a total misfire - ie it was an interesting idea that never got developed and just died on the vine. One wonders how - given the amount of time it took to produce the arc - that one one on the editorial level noticed and it was just allowed to wander off like that.