I’ve never been a fan of Daniel Clowes, but a recent art book has changed my mind.

Not that I don’t admire Clowes’ craft and skill – I do, I do. He’s the writer/artist of the Ghost World graphic novel, and the screenwriter of the 2001 movie (starring Thora Birch, Steve Buscemi and a teenage Scarlett Johansson). His writing is nuanced, subtle and open to interpretation; his artwork is detailed, meticulous and professional. Everything in a Clowes story is thought through and has meaning, from the size, shape and placement of word balloons to the use, or non-use, of color (both indicating any number of things, from chronology to emotional state). These are all good things. 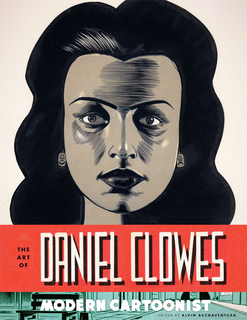 What puts me off about Clowes’ work is that a major element – often the entire point – is the inability of some human beings to form genuine emotional connections with each other. His protagonists are usually sad, damaged loners who are socially maladroit and painfully unhappy. I have shied away from Clowes’ work because it usually depresses me unutterably.

Of course, that’s catnip to English majors, especially the ones who have become literary critics. Clowes is a huge favorite of the literati. His 2007 work “Mister Wonderful” was serialized in The New York Times Magazine, and he is a frequent cover artist for The New Yorker. This makes Clowes somewhat in demand in cultural centers like NYC and Hollywood, which is pretty unusual for a comic-book artist.

Which all leads to the inevitable coffee-table book, The Art of Daniel Clowes: Modern Cartoonist (Abrams ComicArts, $40). The editor, Alvin Buenaventura, takes an unusual approach with the book (which almost seems a requirement, given the subject matter). Instead of writing endless pages analyzing Clowes’ career and work, he has collected (or possibly commissioned) a number of essays about different Clowes stories or chapters in the artist’s life. Some names are familiar to me (Chris Ware, writer/artist of Jimmy Corrigan, the Smartest Kid on Earth; Chip Kidd, award-winning book designer and writer), but most appear to be literary critics of some kind. This brings a more high-falutin’ brand of review and analysis than you usually find associated with comics, and forced me to re-examine my assumptions about, and antagonism to, Clowes’ work.

In fact, it converted me. Now that I understand so much better what he’s doing, I may be ordering such collections as #$@&!: The Official Lloyd Llewellyn Collection, Art School Confidential, The Death-Ray, Ice Haven and Wilson. After reading Modern Cartoonist, you might feel the same.

Or you might just monologue about it and remain sad and lonely all your life, before dying quietly of cancer. In which case you might be IN a Daniel Clowes book.

The opposite end of the comics spectrum from the adult work of Daniel Clowes is kids’ comics, which all but vanished in the 1980s and ‘90s. Fortunately they are making a huge comeback, with top-notch writing and art from some very talented, dedicated pros. 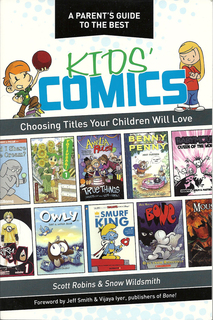 But that very quality sometimes makes today’s all-ages titles hard to distinguish from the vast majority of comics, which are aimed at teens and up. That’s where A Parent’s Guide to the Best Kids’ Comics: Choosing Titles Your Children Will Love (Krause Publications, $16.99) will come in handy.

This book from the publishers of Comics Buyer’s Guide (where I am a contributing editor) may be the first of its kind, and it arrives none too soon. There are some terrific comics out there that kids and parents both will love, but are as well drawn as any adult book and could miss their audience – titles like Amelia Rules!, Bone, Courtney Crumrin and Mouse Guard.

And, of course, there are more cartoony books for very young ages, and everything in between. How can a parent tell what is appropriate for what age?

That’s where Kids’ Comics comes in. Library professionals Scott Robins and Snow Wildsmith have selected and reviewed 100 of today’s best books, color coded and grouped according to grade level (pre-K through eighth grade). Each title gets full-color illustrations; a summary; lists of related material, educational tie-ins and awards; plus suggestions for what the child should read next.

I was impressed with all of it, especially the balance between educational and recreational reading. I’m not a parent, but if I was, I’d want this guide handy for browsing Amazon or trips to bookstores and comic shops with the young’uns.

Clowes is brilliant.  I think the sort of off-putting cynicism and rejection of romaticism/idealism that you were seeing in his work is very common in a lot of underground American comics.  I guess much of it is in reaction to the shiny happy world of TV and advertisements - which show us the life we wish we had, and our own lives can't measure up to them!  I think the gap between the aspirational world that saturates our culture and 'life as it is' is the major cause of the cynicism which has aken hold of our culture.  The Underground comics of the 80s were probably a bit ahead of the curve in that regard.

Have you read Pussey, about the superhero comics creator?  That was scathingly funny.

I read the Death Ray recently.  Another great comic.  A kind of serious 'what if superheroes were real' story, except without any of the certainties that superhero stories usually provide.