My name is Andrew Smith, and I am a comic-book junkie. 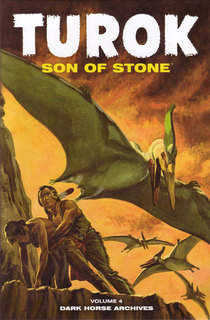 For those only familiar with Turok’s current videogame incarnation (which I hear is pretty impressive), Dark Horse’s Turok Archives reprints the character’s earliest appearances, which were in the 1950s and ‘60s at a now-defunct comics company called Dell, best known for TV show adaptations and Disney books.

Like the current videogame, Turok in the comics is a pre-Columbian Native American who gets trapped in a Lost Valley (with a sidekick named Andar) full of dinosaurs, cavemen and various other anachronisms. But unlike the videogame, Turok the comic book isn’t really all that exciting.

It’s actually pretty predicable. Turok and Andar search interminably for an exit from Lost Valley that we readers know they will never find, but survive because of technological superiority – they know how to make fire and poison arrows, and nobody else does. When you’re a spear-carrying caveman who’s always on the menu for dinosaurs (called “honkers” in the series), it pays to buddy up to the guy with the “magic” bow.

Most of these stories (from Turok Nos. 19-24, 1960-61) riff off that idea one way or another, usually ending with the cavemen learning an after-school-special lesson. That’s the stuff of a noontime snooze, especially with the pedestrian art involved. Plus there are little educational pieces in each issue (e.g., “Triumph of the Egg”), which are usually pretty sedate except when they’re hilariously wrong. (Hey, they were written 50 years ago!)

You’d think Dinos & Injuns would be exciting. And the videogames prove the concept can be. But these comics are just mildly entertaining.

Which is how I know I’m an addict. I can’t tell you that the Turok Archives are outstanding, or exceptionally well done, or seminal early work by great artists. None of that is true. But I love ‘em just the same.

Maybe it’s just the comfort of the familiar. But I eagerly whip through each Turok volume when it comes out. I can’t even pretend I’m buying them for review any more, because I don’t have much more to say about them.

Except I just did say quite a bit, didn’t I? Whew! Now I can still deduct this book from my taxes! DC/Vertigo’s Fables series is being re-released in an oversized, glossy “Deluxe” edition, starting all over with volume one ($29.99). It’s got some extra sketches and such that neither the original comic-book series nor the earlier trade paperbacks contained.

But that’s not what makes this book special. I found myself laughing out loud reading it, even though it’s the second (or third) time around for me. But it’s been a while, and I’d forgotten just how much fun Fables was originally.
Not that it’s boring or stale now, I promise. But as the monthly series nears the century mark, some of the freshness has, inevitably, worn off. And some of my favorite characters are, sadly, quite dead.

But here they are again in a big, glossy reprint of Fables No. 1-10 from the storied, ancient year of 2002, when Snow White, Bigby Wolf, Jack (of the Beanstalk) and more were being introduced in their latest incarnation, refugees from the Fables homelands, which have been conquered by a ruthless, unnamed adversary. They’re stuck in New York, some of them powerful because they’re well known, others not so much because they’re forgotten. And some of them live upstate on a farm because they don’t look human and the Fables can’t let the Mundies (“mundanes”) know that they live among us. 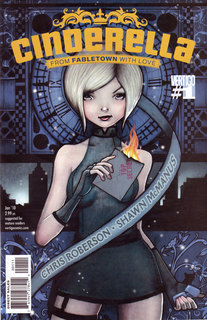 It’s a simple concept and simply a blast, and I recommend Fables: The Deluxe Edition: Book One without reservation.

P.S. Speaking of powerful Fables, one of the mightiest is Cinderella – Cindy to her friends – because just about everyone knows her story. She pretends to run a shoe store (Har! Har!) in New York, in but in reality she’s Fabletown’s superspy – which she’s good at because she passes for human, she’s incredibly resilient to harm and she’s frightfully sarcastic. She’s appeared only occasionally in the regular Fables series, but she’s been granted a six-issue miniseries this month. I’ve only read the first issue of Cinderella: From Fabletown With Love but the story is already hip-deep in James Bond territory.

Comment by Jeff of Earth-J on November 28, 2009 at 4:23pm
I've fallen behind on my Turok reading. I've bought all four so far but I stopped reading after two. Although I will read the rest some day (I'm a junkie, too), I've gotta mix 'em up with other stuff, too. Besides, I've got four volumes (and counting) of Jesse Marsh Tarzan to plow through, too!

Comment by The Baron on November 29, 2009 at 1:39am
They should do a Star Trek:Voyager crossover, and have Turok meet Tuvok.

Comment by Julian Gift on November 29, 2009 at 8:10pm
I enjoyed reading Gold Key's Turok, Son Of Stone. I think that it would have made an interesting adventure series on television.

Comment by Figserello on December 3, 2009 at 8:25pm
With Fables I've got up as far as The Mean Seasons, when Bigby takes a leave of absence.

I have some reservations about Willingham's approach. I don't mind morally dubious characters in my fiction but, I have trouble when the writer seems to be unquestionably condoning their behaviour. Bigby is just such a character. Far from being a maverick who does what he has to to protect his 'tribe', so far he seems like any human slimeball who, when given a bit of power, abuses that power for his own ends.

The Big Bad Wolf might have been a force of nature, above good and evil*, but when he became human he took on the petty little characteristics of a bent copper .

As for Cinderella, I didn't like it that the only 'working class' ex of Prince Charming was the one who had to turn to virtual prostitution to make her way in the world. There was a lot that was dodgy about the episode with Ichabod Crane. That was entrapment, and the revenge exacted on him went far beyond his original crimes. I'm fine with 'The Wolf' doing whatever he wants against his enemies, but a policeman in charge of 'national security' using his position to cover personal vendettas is a nastier concept and leaves a bad taste.

Perhaps the narrative addresses these issues later and I'll certainly continue reading them, but with reservations, for now.

And here's my not entirely serious defense of Goldilocks

* Willingham tries to paint The Big Bad Wolf as a large, noble, amoral demi-god of a creature, but he deliberately overlooks that in the old stories the Wolf only picks on the very weak - little girls and little piggies. He's just a bully!