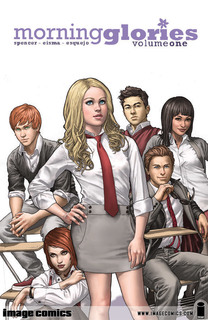 The February sales charts revealed that Image Comics has a new hit on their hands, Nick Spencer’s Morning Glories.  The sales numbers aren’t so high that Morning Glories would be considered a hit if it had been published by one of the big two companies, Marvel or DC.  But it’s a very respectable number for a creator-owned title from one of the mid major publishers.  More importantly, Morning Glories defied typical sales trends: its sales have gone up.  The seventh issue sold more issues than the sixth or the first.

Morning Glories’ gains primarily occurred in two months. The first was in October 2010 with the third issue.  That issue saw a month-to-month increase of 36%.   That increase was made possible because, on the one hand, Image had published second printings of the first and second issues allowing readers to catch up and, on the other hand, because retailers were now able to base their orders on actual demand.

This increase isn’t all that revealing.  It is certainly good news for Image, Nick Spencer and Morning Glories.  It’s nice to have a hit on their hands.  It’s nice to have fan interest create a demand for multiple printings.  But any company would have done the same thing.  If their title sells out quickly, they put out a second printing.  Marvel did this with multiple issues of Fantastic Four’s “Three” storyline and DC recently produced a second printing of Scott Snyder’s first issue of Detective Comics.

The second significant increase for Morning Glories came with the seventh issue.  For many reasons, it shouldn’t have happened.  Retailers had already been able to adjust their orders up with issues three and four.  More recently, with issues five and six, the title had fallen into the typical slow decline.  Yet issue seven gained several hundred readers and 2.2% in sales over issue six.  Again, there are a couple of factors involved.  The seventh issue was the start of a new story arc.  Plus, a trade paperback came out between the sixth and seventh issues.

That latter factor shouldn’t be ignored.  It is notable that the trade sold well on its own- it was the second-best selling trade for the month of February.  It is also notable that the first issue after the trade sold better than the one before it.  The presence of the trade allowed readers to catch up on the first story before joining the second.  In other words, the publication of the trade paperback helped single-issue sales.

Conventional wisdom says that single issues and trade paperbacks are in competition with each other.  But it’s not true.  The formats are actually complementary.

Morning Glories illustrates that point perfectly.   It was a hit series already based on single issues.  It had sell-outs and multiple printings and increased sales.  That buzz translated into great sales for the first trade paperback.  The first trade did even better comparatively than the single issues.  It finished second for the month and beat out better-selling titles from the big two like Superman and Astonishing X-Men.  The single-issue sales didn’t take away from the trade paperback.  Instead, they set the table for the trade.

Morning Glories isn’t the first title to follow this path.  The same thing happened with many of the biggest hits of the last decade: Fables, Invincible, Walking Dead, Y: The Last Man.  All of them saw significant sales increases of single issues shortly after trade paperbacks were released.

Unfortunately, too many publishers have subscribed to the theory that the two formats compete with each other.  They delay publication of the trade paperback until it’s too late to gain any benefit from the buzz on the ongoing series.  Even worse, they make it nearly impossible for readers to catch up to the regular series after buying the trades, virtually guaranteeing that no one will jump from one to the other.  They are likely costing themselves sales. For example, the hardcover collecting Batman and Robin #1-6 was solicited several months after issue 6 hit the stands.  Since books are solicited a couple of months in advance, that meant that the actual publication of the first hardcover coincided with the publication of issue 11.  By the time the first trade came out, the ongoing series was on to issue 22 and a new creative team.

That publication model likely depressed sales on both ends.  The buzz has moved on to something else by the time the book is published meaning that the sales on the book are not as good as they could have been otherwise.  Plus the book came out so late that it isn’t in a position to help single-issue sales.  Readers who enjoyed the first trade of Grant Morrison’s Batman and Robin aren’t likely to buy a dozen back issues in order to catch up or jump aboard the ongoing series under a different author.

I’m disappointed in DC because I think they’re hurting their own books.  American Vampire and iZombie have the chance to become the new Fables and Y: The Last Man.  But it’s hard to see them gaining traction and increasing in sales when it’s so difficult for readers to catch up.  Plus, DC should have all of the evidence they need.  To wit, Flash saw its first sales increase in February with issue #9- the month after the first trade was released.

This isn’t to say that the model of timely trade paperbacks will turn every title into a hit.  Some books simply aren’t going to catch on and an early trade is more likely to confirm that than to chance it.  But this model gives those titles that are already hits to become bigger hits as buzz builds even greater buzz and sales transfer from one format to another.

Comment by Jeff of Earth-J on May 20, 2011 at 12:12pm
You know (somewhat off-topic), Nick Spencer is a name I've been hearing quite a lot recently. I first took notice with the Jimmy Olsen back-ups he was writing for Action Comics, but I've also been enjoying his T.H.U.N.D.E.R Agents. Soon he'll be taking over Secret Avengers from Ed Brubaker (if he hasn't already), and now Morning Glories has entered my radar. Methinks Nicj Spencer might be a name to watch.

Totally agree with you about DC, Chris. It is something I've harped upon about them a few times before. For me waiting for the trade is to save some money, so I sure as sh..er...heck ain't gonna shell out for the hardcover. It then takes so long for the paperback to come out a lot of times I forget to buy it. Or have lost interest. I was tradewaiting Green Lantern, but it was so long between trades I haven't bought any of them since the "Sinestro Corps War".

Comment by Jason Marconnet (Pint sized mod) on May 20, 2011 at 1:15pm
Jeff, Nick Spencer took over for Secret Avengers at issue 12.1, it's the only one that's been released so far. He also writes Iron Man 2.0 which is about War Machine, so far it's a decent series.

I agree wholeheartedly, Chris. I bought the first five issues of American Vampire, but balked as the shorter issues for the $3.99 cover price, so I decided to wait for the trade for the second story. If that paperback were available when the third arc began, I'd likely be buying the single issues again -- and it's miniseries spin-off. As things stand, the hardcover is only finally coming out next week, and it remains to be seen whether I'll be interested in the trade when it finally arrives. Why sacrifice that buzz?

I was planning to read the trade of iZombie, too... but my interest in it has waned, despite never hearing a bad word about the book.

Comment by Rob Staeger (Grodd Mod) on May 20, 2011 at 5:20pm
I'm sure I won't -- but the lag has dimmed my enthusiasm a bit, and the urgency to pick it up right away. But it'll still be a contender when I place my next trade paperback order.

I'm surprised to realise that DC have changed their marketing tactics in this way.  Back in the 90's I got into virtually all of their series after the run had started through TPBs.

And in each case, without exception, Starman, Sandman, Spectre, Hitman, JLA,and Wagner's Sandman Mystery Theatre, (and Busiek's Untold Tales of Spider-man, come to that) I was able to pick up TPBs of the early storylines so that missing the first few issues didn't have to hold me back.  In each case too, having a handy TPB allowed me to hand the initial storyline to people who wouldn't normally read comics as floppies, so that they'd give it a fairer chance initially.

Interestingly, DC chose to use the 2nd major storyline of Gaiman's Sandman, in this promotional way, rather than the first.

Sometimes I would already be collecting the series when I'd buy the introductory TPB, but having the start of the series so handily available locked me in as a loyal reader more readily.

Although I thought of myself as an avid comics fan, I wasn't so into it that I read the preview catalogues months in advance or pre-ordered series I knew nothing about.

The slight downside to this was that my TPB shelf was full of unnumbered first collections of various series, and it would be a long time before the follow up TPBs would come along.

The new business model you've highlighted here would seem to illustrate DC milking the core audience for as much as possible before widening the net to allow casual readers to sample the goods.  That approach isn't one I'm mad about and a lot of the problems peoplle have with current comics are tied up with that approach.

Comics should be for everyone!

I (naturally) discuss these things all the time with my customers. I think the thing that would most likely benefit the "Big two" publishers is if they'd follow the Walking Dead model of publishing collections.

For the past few years, Walking Dead's pattern has been this: Publish 6 comics in six months, with a nice letter column in it. One month (sometimes one week!) after the sixth issue is published, the TPB comes out- no letters, no sketchbooks, no frills. Publish six more comics the next six months. Put out the next TP within a month. THEN a month after that (or so) put out a deluxe sized HC collection that includes both of those paperbacks, PLUS bonus features like sketches, scripts, etc. Once every few years, do an Absolute-style edition that includes two HC worth of comics plus more bonus features.

This (I believe) serves the market best. The monthly readers get their dose, the TPB readers get their dose regularly, and EACH TIME with the opportunity to jump into the monthlies, and the HC reader gets their "big chunk" of story once a year, with the opportunity to shift to TPB or monthlies as their finances allow or as the cliffhangers draw them.* I have had more than a few customers that will buy more than one format, including one that used to buy all four formats.

DC only comes close to following this format with one title, and it's Fables, not coincidentally their best-selling TPB series...

* I expect a larger than normal number of Walking Dead TPB readers than normal are going to want to switch to monthlies after the end of #84/what will be Vol. 14.