Mainstream network television is not a good incubator of unique and "quirky" shows like Josh Whedon's Dollhouse on Fox. Fox has just announced it is pulling Dollhouse off the air during the key ratings month of November. The show is set to resume airing on December 4th, with the long-awaited Summer Glau episode. The schedule change is all but the kiss of death for network television. And it's so sad, because last week Dollhouse finally started to live up to its promise as an absorbing and thought-provoking breakout show. Friday, October 23rd's episode of Dollhouse, called "Belonging" was the story of how the mysterious and exotic-looking Sierra (played by Dichen Lachman) came to be in the Dollhouse. It seems Sierra is actually a young artist from Australia named Priya. She was selling her paintings on Venice Beach when a man named "Nolan" came by and fell for her hard. He asked her out, but she turned him down. He then arranged for her paintings to be shown at a swanky gallery where he promised he would introduce her to important people in the art world. Even after doing all that, Priya still refused to go home with Nolan, instead opting to leave with an Italian art dealer she had just met at the show. And that's when things turned really ugly.

Because Nolan is a powerful technocrat with friends in the Dollhouse. The art opening was actually an elaborate Dollhouse setup. The Italian "art dealer" that Nolan introduced Priya to was actually the Dollhouse "active" named Victor (played by the gorgeous Enver Gjokaj). When Priya was not won over by Nolan's attempt at seduction, he kidnapped her, dosed her with psycho-active drugs that made her appear crazy, and then had her transferred to the Dollhouse. Dollhouse technical guru Topher apparently has no qualms about mind-wiping a psychotic person. Maybe he thinks he's even helping her by making her one of the Dollhouse's "actives," with the codename of Sierra. Sierrra becomes Nolan's pet doll, imprinted with personalities designed to want him and only him. He contracts to have her sent to him again and again so that he can indulge his sick sexual fantasies with her.

But like Echo, something of Priya's real personality persists through the mind-wipes. Even in her infantile state between personality imprints, somehow Sierra knows that something bad is happening to her. In the Dollhouse's art therapy room, she paints colorful images that are marred by black formless clouds. About the black clouds she says, "I don't like this color." Victor, in his child-like way tries to help her, by emptying all the black paint. But he can't stop the Dollhouse from sending her off to Nolan to be raped again and again.

Echo brings Sierra's dark paintings to Dollhouse manager Adelle's attention. She and Topher discover that Priya was never really crazy, but drugged by Nolan to seem crazy. For some reason, they are outraged about that and Adelle tells Nolan that she will never allow him near her actives ever again. Am I the only one who finds their reasoning to be a little strange? So, they think it's wrong to drug a woman and have her sent to the Dollhouse, but apparently they think what they've been doing all along is okay--imprinting a poor crazy woman who can't give conscious consent and sending her off to be raped? How can they be so morally outraged by what Nolan did? Why do they think it is any worse than what they do to all the actives?

I think this episode raises this question: When the Dollhouse sends its actives out on sexual assignments, is it not always by definition rape? Afterall, if you give a woman a date-rape drug, and she doesn't resist or even appears to comply, it's still rape because an unconscious or drugged woman cannot legally consent to sex. So, how can the "actives" legally consent? Even if they are imprinted with a nymphomaniac personality and appear perfectly willing, that is still not conscious consent. And it seems that Sierra somehow retained enough of her original personality to be revolted by having to have sex with Nolan, even though she may have seemed to be perfectly willing at the time. As I have said before about "Dollhouse," there is something especially creepy about people who are willing to pay for other people to be something they are not. And that is especially true of Nolan. He knows that the real Priya wouldn't screw him, so he paid the Dollhouse to have her imprinted with a personality that will screw him. How is that any different than drugging her and forcing himself on her? Is Adelle also not guilty of raping Victor? She has also had him imprinted and taken him home to have sex with him...something her boss, played by a very creepy Keith Carradine, makes some snide comments about.

Spoiler alert! If you haven't seen the episode, you might want to stop reading now because I'm going to give away the ending. Adelle DeWitt is overruled by her boss, who orders her to imprint Sierra permanently with one of her docile personalities and give her to Nolan for good--in essence, selling her into slavery. It would also mean Priya's real personality would never be reunited with her body. But Topher disobeys Adelle and instead restores Priya's real personality. Priya then goes to Nolan's house, confronts him and kills him in a struggle. Boyd and Topher get there to find Nolan's body. Boyd takes charge and makes Topher do the dirty work of dismembering and disposing of Nolan, something that the fey Topher clearly finds distasteful. In the end they take Priya back to the Dollhouse and she apparently consents to being mind-wiped, just to forget the horror of it all.

The only bright spot in this dark episode is the persistence of Sierra and Victor's love for each other. 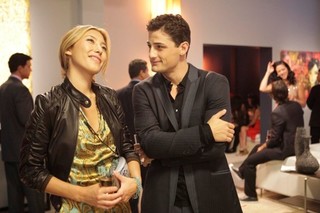 Priya was drawn to him from the moment she met him at the phony art opening that Nolan arranged for her. Somehow their attraction for each other survives all the mind-wipes and they show their affection in child-like ways as they drift around the Dollhouse holding hands. In the last scene, they are snuggled together innocently in the same sleeping pod.

The supposed star of Dollhouse, Eliza Dushku only makes a few appearances in this episode, wandering around making Cassandra-like warnings of impending doom like, "A storm is coming..." She is clearly becoming more and more self-aware and is writing down things, and etching words into the glass of her sleeping pod, apparently to remind herself of facts like "They trained me to kill," between mind-wipes. Some commentators have written that "Belonging" was a good episode because Dushku was not a central character. While that's a little unfair, I think it's fair to say this show works better with an ensemble cast, rather than as a vehicle for a star. Dushku's limited acting range can't carry the show, but it shouldn't have to. Maybe if the network had let Whedon take this tack from the beginning, the show wouldn't have floundered so much in the first season.

Comment by KSwolf on October 28, 2009 at 3:27pm
I just got around to watching this episode last night, and I have to say that it was easily one of the creepiest and most disturbing stories ever told on television. It's a shame that it's likely to get canceled after the current season runs its course - this was probably the strongest episode to date.

Comment by Joan Carr on October 28, 2009 at 6:01pm
Yeah it is sad that the show will probably be cancelled now when it's just getting really good. Do you agree that there's something dopey about DeWitt being all pissed off at Nolan for drugging Priya to get her committed to the Dollhouse? She's probably not the only one who's there against her will. It just seems silly for DeWitt to be all holier than thou about it. I don't see how it's that much worse than what they do to all the dolls. It's a little late for her to be squeamish.

Comment by Ana Canino-Fluit (Anacoqui- mod) on October 29, 2009 at 8:07am
DeWitt, has a very odd sense of morality. It is certainly flexible on the idea that coercion and pressure can still yield valid consent (Caroline, the dude who released the toxin on the college campus...) and has sent those who oppose her to the Attic. Yet she does somehow seem to believe that they are helping people,both dolls and clients, but at the same time growing increasingly unhappy and upset with the parent company (have you watched Epitaph One yet!?). She honestly has one notion about how the tech is and should be used, and doesn't seem to have the imagination to see the repercussions of the whole scheme till much to late.