I am a relatively new devotee to social networking, but in the few short months I have been on Facebook, I have taken to it like a duck to the fountain in the Peabody Hotel lobby. I have to admit it is a guilty pleasure of mine to browse my friends' profiles and also look at friends' of friends' profiles (I'm sure I'm not the only one who does it!). I was innocently doing just that the other night when I discovered that a friend of a Facebook friend is married to an ex-boyfriend of mine. This was no big shock--I knew he married relatively recently and it is no surprise that his wife is Facebook friends with this mutual friend of ours. But I still stumbled across it unexpectedly because, like me, she never changed her maiden name.

So, here I am looking at some wedding photos of a complete stranger, and I think, "Wow, the groom looks familiar. Is that who I think it is? Oh...yeah, it is" I really don't have any unresolved feelings for him, because that was completely OVER, and it was also about 15 years ago. But still, I must admit I felt a tad bit jealous because there were also honeymoon pictures of them in various European cities (he took her to Europe?!? He never took me anywhere!) However, I was also pleased to note that she is two years older than I am (snark!) But the bride looked lovely and they looked very happy and despite myself I'm happy for them. However, I think I would be just as happy if I had never seen the pictures. I suppose I should have stopped looking at them when I realized what they were...but do you have that much self-control in the face of curiosity? Well, apparently I don't.

It's strange to be a voyeur like that on someone else's life...someone whom I've never even met (I mean the bride. I knew the groom rather well). And if I think it's strange, imagine how strange she would think it was, if she knew that I was looking at her wedding photos! I've set my Facebook photo privacy feature so that supposedly "only friends" can view my photos. But I know it's still possible for others to see them. I know that because a former co-worker whom I intentionally did not friend, once sent me a message commenting on some photos I posted on my wall. The lack of privacy sometimes makes me want to take all my photos down. But while looking at my ex's wedding photos, I also had the contrary urge to post some of mine. But they are also my husband's wedding photos, and that's the issue. If I posted those photos on my Facebook page, would one of his ex-girlfriends some day look at them in curiosity, jealousy or bewilderment ("He married her? Why?") They might also make snarky comments about the venue, my weight, my dress, my hair (which admittedly was awful). Of course our wedding was so long ago that I would have to scan our photos in to post them, because they are actual old-fashioned photos, and that's an awful lot of work, so I will probably never do it. When we got married in 1997, I don't even think I knew what a digital photo was, let alone how to post one on Facebook. But even if I had the pictures in digital format, would I post them on Facebook? I don't think so. The people I wanted to see our wedding were invited. All others, including friends I've made since then--too bad, you missed it. 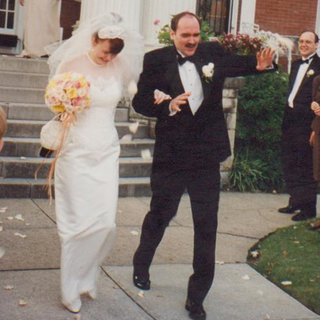 It's sort of the same reason I chose not to get a wedding video. For one thing, they're rather expensive. For another thing, I know enough about video to know that it doesn't really capture events as they really looked and felt like to you at the time. I think I prefer my own memories of events, which are colored by my own emotions. The video might look flat and unremarkable in comparison. And, if you weren't there for our wedding, too bad. You don't get to see a poor copy of it later on YouTube.

Run from the cameras!

Comment by the_original_b_dog on October 13, 2009 at 1:26pm
I had something similar happen to me this summer. The Lovely Mrs. B-Dog's sister got married. I took a bunch of photos and posted them to Facebook. I normally let "friends only" view my albums, but this time I set it for "friends of friends" and tagged everyone so that people who are friends with my wife (and the bride, and the groom, and the maid of honor) could see them. It turned out my wife was still friends with her sister's ex-fiance. A bit awkward, to say the least.

Comment by Joan Carr on October 13, 2009 at 2:09pm
Yep, social networking makes for some awkward situations, for sure. I also don't understand the people who seem willing and eager to "friend" just about anyone they meet on-line. But then there are so many people out there using Facebook to promote themselves or some product or business...so tacky in my opinion.