Fellow Legionnaire, Culture Vulture (Mike Williams), iscompiling a list of the top 100 most memorable moments in comic books.  I figured that if I’m going to do all of the work in submitting a list, I might as well get a column out of it.  It’s comparable to a baseball reporter writing about his Hall of Fame ballot.  Or, you could say I’m just lazy that way.

As I was working on my list, I realized that I had to restrict myself to moments that had occurred since I had started reading comics.  It wasn’t a purposeful choice, as much as the only possible choice.  I would have done the same thing for general history.  I know about the first appearance of the Beatles or the race riots of the late ‘60s.  But those aren’t my memories.  Those are my parents’ memories or events I read about in a book.  My most memorable moments would be those that happened while I was alive and old enough to be paying attention- the Challenger explosion, the fall of the Berlin Wall and so on.

Without further ado, here is my list of the ten most memorable moments in comics.

For me, this is more about the moment in time than it is about the story.  I didn’t read the full Secret Wars mini-series until much, much later.  But I remember what a big deal it was when Spider-Man got a new all-black costume.  I was a kid at the time and I would read the occasional issue of Amazing or Spectacular.  When Spider-Man first appeared in his new costume, I felt like the earth had shifted under me.  Spidey stories were suddenly more alive because I felt that if he could abandon his old costume, then anything could happen next. 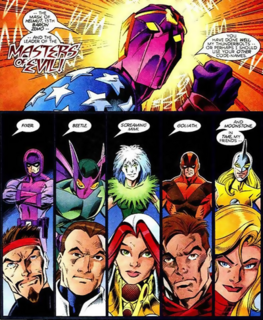 This is the definition of the surprise ending.  Every other shocking twist is measured against this one.  Kurt Busiek introduced the Thunderbolts as a new team of heroes, ready to step into the breach while many of Marvel’s greatest superheroes were gone.  Then, suddenly, at the end of the first issue, Busiek revealed that the Thunderbolts were really the Masters of Evil in disguise.  I remember the guessing games before the first issue came out.  I remember flipping right to the end of the book because I couldn’t wait.  I remember the impact of the story, even after I knew what was coming. 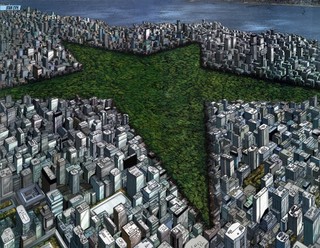 It’s almost too recent to include.  There are plenty of moments that are stunning the instant they happen but fade over the passage of time.  Yet, despite its closeness, I doubt this is a moment I will forget easily.  What sets this moment apart is its hopefulness.  It’s not a moment of destruction or a death (those come later).  It’s a moment of creation.  The white lantern ring uses Deadman to bring a bird, a forest and a city back to life.  It’s incredibly moving.  And it sets a wonderful stage for a story that isn’t finished yet. 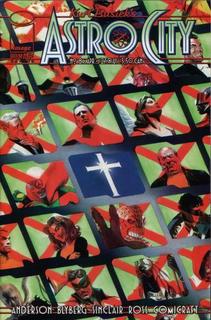 I’m not the kind of guy who predicts plot points ahead of time.  I tend to immerse myself in a story instead of trying to figure it out.  One upside is that I’m often successfully surprised.  Even though Kurt Busiek did a great job of dropping clues (which I noticed when I re-read the story), I was astonished when it was revealed that one of Astro City’s greatest heroes was a vampire.  The moment, however, was about more than the revelation.  The Confessor intentionally sacrificed his reputation and then his life in order to unveil an alien invasion. 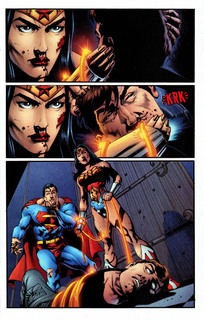 What a shocker!  In order to prevent Max Lord from exerting mental control over Superman- and causing another Man of Steel-sized rampage- Wonder Woman snaps his neck.  It was such a great moment in that it was a surprise and it wasn’t.  It was surprising because we didn’t expect it.  We don’t expect the hero to kill the villain, even when there’s no other choice.  But it wasn’t a surprise in that writer Greg Rucka had been carefully establishing Wonder Woman’s character as a warrior in battles with mythical villains like Medusa. 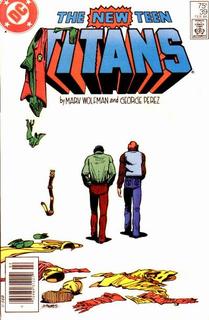 There were famous scenes before this one of superheroes quitting the team or the vocation in Amazing Spider-Man or Fantastic Four.  But this was my team.  These were my heroes.  And this was my moment.  I was shocked that these characters that I admired would simply walk away.  It broke my heart.  There were a lot of great stories during the Wolfman/Perez Titans but this event stands out as a memorable single moment. 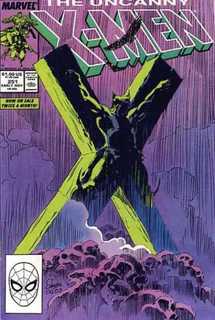 Don’t think poorly of me but I like Wolverine best when he’s sad.  He’s most powerful as a character when he’s hurting, physically and especially emotionally.  I could have cited too many examples- Mariko calling off their wedding, Magneto stripping the adamantium from his body.  Yet my favorite is a moment that isn’t widely heralded.  Wolverine was crucified on an X-shaped cross by Donald Pierce and the Reavers.  Left for dead, Wolverine pulls himself down from the cross.  What makes the moment so special is that we see it through the eyes of Jubilee.  Her grief and her pity define that moment for us. 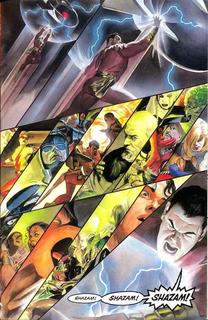 Kingdom Come is the series that showed me the full potential of comic books.  It was a rich tapestry, with big themes and little tidbits.  It was full of indelible moments but none was more striking than the climactic moment when Captain Marvel abandoned his fight with Superman to intercept a falling nuclear bomb.  There was huge tension, a race against the clock with the fate of the world at stake.  Shazam successfully detonated the bomb in the atmosphere allowing some, but not all, of the heroes below to survive. 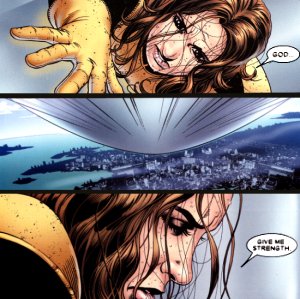 I shouldn’t have been able to feel this much.  I had been an avid reader of comic books for more than a dozen years and a casual reader for twice that.  I should have been too jaded by this time.  But Kitty Pryde’s sacrifice- and Joss Whedon’s story- moved me to tears as a grown man.  Artist John Cassaday captured the emotion of the moment perfectly.  This was such an amazing comic book that I immediately read it a second time and then set everything else aside because I didn’t want to spoil the moment. I remember hearing about it months ahead of time.  I remember walking into a comic book store and seeing the posters- the bloody “S,” the tombstone, the heroes lined up behind the casket.  I remember debating the story with my best friend.  I remember the media coverage.  And I remember the story- the incredible full-page spreads by Dan Jurgens, the punches that you could feel through the panels, the shot of Superman and Doomsday lying motionless on the ground, Lois Lane’s potent grief.

My most memorable moments? If I may, in no particular order, off the top of my head...

01. Acton Comics #434 (May 1974) My very first comic book, and I didn't realize until years later that the Superman lead was the second half of a two part story!

02. The first Superman/Spider-man tabloid, because until then, I wasn't even aware there WAS another comic book company publishing superhero titles!

03. "Clark Kent marries Lois Lane" in the 40th anniversary issue of Action Comics. Granted, it was the Earth 2 version of the characters, but still...

04. Uncanny X-Men #137 and the sacrifice of Jean Grey. Cheapened by events since, but very powerful and moving to the impressionable teenager who read it.

05. "The Judas Contract" (Wolfman/Perez run on The NEW Teen Titans), for I never expected one hero to betray the others, let alone how the ending turned out.

07. The original Crisis on Infinite Earths, especially issues 7 and 8! While I personally had no trouble keeping up with the multiple Earths continuity, overall a very good series. The sacrifices of Kara and Barry were handled well, although because of events since...

08. "The Great Darkness Saga" in The Legion of Super-Heroes, for the revelation of who the villain behind it all was a major surprise to me!

09. "The Death of Superman" storyline, because by this point although the comic book companies were installing the revolving door on Death's doorstep, I never thought they would do it with him!

10. "Kyle Rayner as the New Green Lantern". Granted, Hal Jordan's departure (like Green Arrow's in issue 100 of his original series) was handled VERY poorly in my personal opinion. Yet just because the departure of the established character was screwed up, there was no reason for fans to take it out on Connor Hawke and Kyle. Rayner was/is a good character and deserved a better reception than he received.

11. "Bane breaking Batman's back". Despite Death's new revolving door, I never expected Bruce Wayne to return except in an advisory capacity, as shown in the Batman Beyond series.

12. Superman: The Wedding Album. This time for sure!

13. "Wonder Woman versus Maxwell Lord." I understood WHY she did it, but since when do super HEROES kill? You expect it from the villains, so the death of Bart Allen, while a shock, was not a major surprise.

14. THE NEXT ISSUE.. because while I have been through several cycles of story telling, cliches, gimmicks, and whatnots since 1974, I have thankfully not lost my love and interests in the overall medium.

Comment by Jeff of Earth-J on March 11, 2011 at 3:59pm
My most memorable moment: family vacation, 1973. My mom had a small stack of comic books (her choice) to keep me entertained in the car during our annual trip to the Lake of the Ozarks, among them, Hulk #167. On the way we stopped at Eldon, MO for footlong hotdogs, and at the nearby bus station, there on the newstand, was Hulk #168. I had read comic books before, but this was the first time I ever obtained two consecutive issues. From that point on, my life was set. That is my number one most memorable comic book moment.

8. "Stained Glass Scarlet" in Moon Knight No. 14 (1981). One of the best written comic book stories I've ever read. Still remember the last line: "Some people succeed in their chosen mission -- others fail, no matter how hard they try." Or words to that effect.

10. "The Tower of the Elephant" in Conan No. 4 ((1971). The story that got me hooked on sword & sorcery and showed Barry Smith to be more than a Kirby imitator.

Comment by Chris Fluit on March 11, 2011 at 5:36pm
Don't forget to send your lists in to Mike Williams to make them official.

Comment by Rob Staeger (Grodd Mod) on March 31, 2011 at 12:10pm
I just sent in my list -- including one moment that seems like a 25-year predecessor to a moment on Chris's list. But one stunner that just occurred to me was the revelation of Tara Markov in a bathrobe in Deathstroke's bedroom. And smoking, at that! It was a great moment -- we knew she was a bad girl from the start, but we really hoped she was trying to be good.Fooled again.