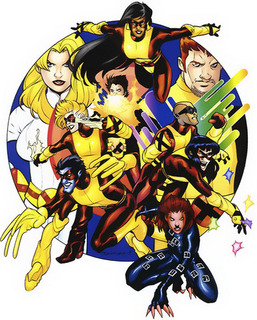 Another part of the problem is that I’m easily susceptible to suggestion. I admit it. When I see an ad on TV for pizza, I get a craving for pepperoni and cheese. I hear a song on the radio, I want to go home and play the album. I can’t be coerced into wanting something I don’t like. But I can be reminded of an interest and have it reignited. 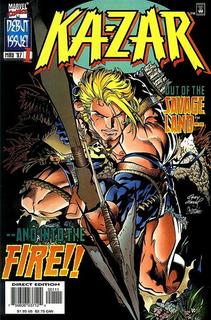 Last year, I completed my collection of Generation X- a great series that came out in the ‘90s when I

was getting back into comics. I had a lot of fun re-reading my favorite issues.

And I enjoyed the work of some of the creative teams that came along after I had dropped the series. However, as I flipped through each issue, I was rem

inded of other series that caught my eye at the time but that, for one reason or another, I hadn’t followed regularly. My interest was rekindled in cool, late ‘90s series, like Heroes for Hire by John Ostrander and Pascual Ferry.

I remembered that I wanted to finish my collection of Ka-Zar by Mark Waid and Andy Kubert. And my interest was sparked in titles I had ignored back then, like Maverick (was that Jimmy Cheung before he became a superstar!?). I completed one series only to be inspired to pick up three others.

That’s not an isolated incident either. Last year, I also bought a complete run of Firestorm. I loved Firestorm when I was a little kid but I didn’t have that many of the comics. It was a blast to buy them, and an even bigger thrill to read them. That feeling was so good that I wondered if I could recapture it. Maybe I could buy another complete run of something like Master of Kung Fu. Maybe I could complete my collection of another fun ’80s series like Infinity Inc., Legion of Superheroes or Spectacular Spider-Man. Maybe I simply needed to buy more Firestorm- my collection of the Jason Rusch run is woefully incomplete. See, my wish list never gets shorter! Every purchase piques my interest in something else. I suppose there is a bright side. For one thing, it means I always have something to look forward to. Honestly, the anticipation is part of the fun. I take pleasure in the pursuit of new comics- or older comics that will be new to me. It’s fun to go to a comic shop and flip through back issue bins. It’s fun to fill out an order and have it arrive in the mail.

I also don’t fear the much-predicted end of comics. If Marvel and DC and everybody else went bankrupt, I’d be fine. Sure, I’d miss new comics. And I’d miss going to the store every couple of weeks. But there are so many back issues to buy- so many series I’ve never even read- that I’d be able to keep going for a long time.

Ps. My Netflix queue never gets any shorter either.

Nice article, Chris. On a related note, I used to go to comic book shows and I used to have a list of “fall-back items” I could always find cheap if I couldn’t find anything else so I wouldn’t have to go home empty handed. I don’t go to shows so often anymore because, thanks to living in the Golden Age of Reprints, there are fewer and fewer fall-back items I need.

For example, if I couldn’t find anything else, I used to be able to score a stack of ‘70s reprints of ‘50s Marvel monster comics, but I now own nearly all that stuff via Marvel Masterworks. Magnus Robot Fighter and various other Gold Key titles took the place of the Marvel monsters, but now, thanks to Dark Horse, I own all that stuff, too.

I very rarely ever buy individual back issues anymore; I just don’t need to. I’m not complaining… not at all. My collecting habits have merely changed. And my archival wish list never gets any shorter, either.

Thanks for the comments, Jeff.

I very rarely ever buy individual back issues anymore; I just don’t need to.

I still prefer single issues to trade paperbacks.  I buy trades for older series that are hard to collect because of prohibitive price or limited availability.  I also buy trades for newer series that read better in that format (or that have significant extras which make the trade preferable).  But if I can get back issues for roughly the same cost as a trade, then I'm going to go with the individual issues.

On a related note, I used to go to comic book shows and I used to have a list of “fall-back items” I could always find cheap if I couldn’t find anything else so I wouldn’t have to go home empty handed.

That is a lot of fun.  It's one of the things that I appreciate about '90s comics.  Because the speculator market drove up print runs, the supply outstrips current demand and it's very easy to find those comics at comic book shows or in discount bins.  I've been able to put together collections of Ultraverse, Valiant, Milestone and early Image that way.