I was working on my pre-order list the other week and I ran into a bit of dilemma.  There are so many X-Men books that I’m running out of room for other stuff.

Now I know I won’t get much sympathy from older fans who have been complaining about too many X-books since the late ‘80s when the franchise expanded to five with Excalibur and Wolverine.  Or maybe they had started complaining already in the mid ‘80s when New Mutants and X-Factor made it three.  But this is different.  I’m not talking about solo series or spin-off books.   I’m talking about actual X-Men books.

Since last summer, there have been four X-Men titles: Astonishing X-Men, Uncanny X-Men, X-Men and X-Men Legacy.  Entering this summer, those X-books are also all shipping twice a month.  Plus, there’s an all-X-Men mini-series special event.  If I was so inclined, I could buy 10 books a month that are just X-Men.  And that’s not counting solo stars or spin-off series like Wolverine or X-Factor.

I suppose that Spider-Man, Superman and Batman fans are used to this.  Those characters have all had four and sometimes five titles.  And Batman’s had a slew of spin-off titles for years.

The easy solution might be to drop a couple of X-books.  That would clear some room on my pull list.  And I’m sure that would teach Marvel a lesson too.  But here’s my dilemma.  I don’t buy comics in order to send messages.  I buy comics that I enjoy reading.

Plus I don’t I want to drop comic books that are good so that I can buy something else that may or may not be good.  That’s another thing about these current X-Men comics.  They’re all good. 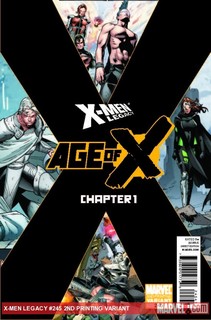 X-Men Legacy has been the most distinctive title for the past year and a half.  Rogue has been the nominal lead and the book has focused on her as a mentor to the younger heroes.  It’s been a great way to keep up with many of the characters from New X-Men: Academy X.  And writer Mike Carey has done a great job of balancing Rogue’s relationships with the other X-Men, especially Gambit and Magneto.

More recently, X-Men Legacy has embarked on a mini-crossover with New Mutants in the alternate reality story Age of X.  I was a little hesitant about the story based on an extra prelude piece but the actual story has been incredible.  Carey has done a great job of putting familiar characters into unfamiliar situations (Cyclops as the rough outsider Basilisk, Magneto as the inspirational leader, etc.).  And there’s been a very cool mystery at the heart of this alternate reality.

I can’t wait to see how Age of X is going to end.  So X-Men Legacy isn’t exactly a candidate for the chopping block. 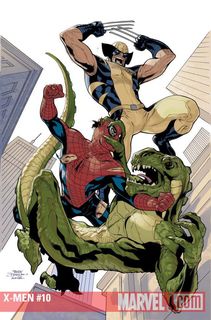 X-Men, sans adjective, is the newest of the X-Men titles.  It’s also the current flagship in that it sets the direction for the line.  It launched with the big Curse of the Mutants story which pitted the X-Men versus vampires and spilled over into several other titles.  It’s currently running a story called Protect and Serve, which has been accompanied by an anthology called To Serve and Protect.

Ignore its flagship status and focus on the story itself: X-Men is really good.  In the current story, Storm and a team of X-Men flew off to New York to investigate rumors of kidnappings in the sewers.  They thought they were going to encounter a new gang of Morlocks.  Instead, they’ve run into a new breed of reptile warriors.  The result is a surprise team-up with Spider-Man in a follow-up to Shed, Spidey’s excellent Lizard story from last year.  The sneak sequel is even drawn by the same artist, the amazing Chris Bachalo.

That’s pretty cool.  I’m not about to drop the X-Men in the middle of an amazing Spider-Man team-up. Uncanny X-Men is the original X-Men title and it’s still the heart of the franchise.  It was the driving force behind the Utopia and Second Coming stories- and Second Coming was the best X-Men crossover in more than a decade.

The most recent story was called Quarantine.  A villain had devised a mutant-specific flu and released it on the X-Men’s home island.  On the island, we watched as the science team worked for a cure while their teammates slowly succumbed to the illness.  Meanwhile, a select squad of X-Men, absent when the virus hit, were tasked with protecting the city of San Francisco by themselves.  They also took it upon themselves to take down the villain.  Quarantine was a great underdog story as the X-Men had to overcome overwhelming odds.

Now, Uncanny is starting a new story: a sequel to Joss Whedon and John Cassaday’s astonishing adventure on Breakworld.  Even if it doesn’t match the original, that’s a story worth checking out. 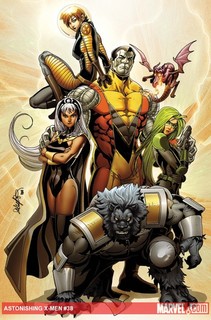 Astonishing X-Men used to be the premier X-Men title.  It was the showcase for superstars like the aforementioned Joss Whedon and John Cassaday.  They were followed by Warren Ellis and star artists like Simone Bianchi and Phil Jimenez.  That’s not the case anymore.  Apologies to Daniel Way fans, but he doesn’t exactly carry the same cachet as those other creators.

I almost didn’t pick up the newest arc of Astonishing X-Men.  I preordered it out of habit before I realized the creative team had changed.  But I’m glad I got it.  The current story is Monstrous and the basic premise is the X-Men versus gigantic Japanese monsters.  Marvel’s own dragon, Fin Fang Foom, has escaped from Monster Island and is attacking Tokyo.  Before you can say “Godzilla,” the X-Men are called in to combat it.  It’s just a fun, crazy story.

I suppose that if the story was badly told, I’d have no problem cutting Astonishing X-Men.  But I’m not about to jump ship on this kind of crazy.

So there’s my dilemma.  The four X-Men titles are, at least right now, all different and all good.

I have a few possible solutions.  I might stop preordering a couple of the titles and pick up shelf copies.  That way, I’m better positioned to drop one of them if they change to a story or a creative team that I don’t like as much.

Yet as long as they’re all this good, I guess I don’t mind if they continue to take up a big part of my pull list.  It may not allow for as much variety as I’ve been used to in the past.  But at least I know that I’m reading stories I like.

What a great problem to have!

But seriously, if it's really a problem, then I'd echo the "buy shelf copies" advice. Or maybe wait for digital copies, which are cheaper. But if you like them, by golly, get them! Some day you'll have the opposite problem, and think back to now as "the good old days."

Comment by Doc Beechler (mod-MD) on May 6, 2011 at 3:45pm
I used to buy most of the X-titles, but have drifted over to more Batman and Superman stuff recently and kinda stopped reading about the mutants.  I love the message of the X-books and it's nice to see it in full-force on shows like Glee and Modern Family.

Why does no one discuss the X-Men here?

I don't know myself, but how many avid X-men fans do we have here? Most of the discussions here seem to tilt towards DC comics, or older comics. Then the Marvel comics that are brought up are rarely X-men oriented. Cap? Avengers? Sure. So, I am assuming (I know, I know) we don't have that many X-men fans, and those we do have don't feel a need to start topics about them.

I do think Chris does a fairly good job of bringing the mutants up often in his blog posts. I may not read the comics, but I read his posts.

Chris, I have no solution to your problem. Dip in to the kid's college fund to buy the comics you want?

Comment by Jeff of Earth-J on May 6, 2011 at 3:20pm
If you're truly enjoying them, then I feel your pain. But frankly I don't think four titles is all that many under the circumstances. If it were me, I'd go with the impulse to cut these from your preorders and buy shelf copies. Unless you're getting an extra discount for preordering, there's really no point to it; none of these titles is going to be difficult to find.

Comment by Cavaliere (moderator emeritus) on May 6, 2011 at 1:52pm
I think the simple answer, Chris, is to subscribe to Marvel's digital program. You'll have to wait to read them but you're paying a flat rate for access to the entire Marvel digital library and you don't have to store the comics when you're done reading them.

A question or two if you don't mind. As you may know, I've been away from the X-Men for years. I must say that I didn't realize there were so many ongoing X-book series that are labeled "X-Men."

With so many X-men squads running around I have to wonder "how does it all work, logistically, within the Marvel Universe?"

Are their clear delinations (spelling) between the teams or none at all?

Do they all reside in the mansion grounds? Are some in San Fran and some in New York?

Is there some sort of massive dormitory?

Who is the absolute leader of the organization?

Is it ever explained who foots the bill for their lifestyle, the team's upkeep and the grounds? (I would assume it's just explained as the remnants of Xavier's fortune, but who knows.)

Just how many current, active members are there in the X-Men? (I suspect there's no "formal" membership the way there is with the Avengers or Justice League. I think if you're a mutant, generally on the "side of good," and hang out with them then you're a member.)

And that's not counting all the one-shots Marvel's lobbing our way!

Actually, this does raise one issue I've been meaning to ask about:

Why does no one discuss the X-Men here?

I mean I read the books but try to skip the crossover events but the team, titles and situations are seldom mentioned.

Not a complaint, just wondering.

Travis Herrick (Modular Mod) replied to Alan M.'s discussion So, What Are You Reading These Days? (besides comics)
"Currently reading Jack of Spies by David Downing. This takes place before WWI, and Jack McColl is a…"
3 hours ago

Captain Comics replied to Captain Comics's discussion Bond #5: 'From Russia, with Love'
"I'm so confused! I made sure to watch Dr. No, From Russia With…"
8 hours ago

Jeff of Earth-J replied to Captain Comics's discussion Bond #5: 'From Russia, with Love'
""We haven't gotten there yet!" I'm so confused! I made sure to watch Dr. No,…"
10 hours ago

Captain Comics replied to Captain Comics's discussion Bond #5: 'From Russia, with Love'
"You might find this interesting: I knew all of that except the part that it was SMERSH that were…"
11 hours ago

Lee Houston, Junior replied to Steve W's discussion A Cover a Day
"Hopefully this situation will turn out well in the end... (Image courtesy of the Grand Comics…"
11 hours ago