Jan. 11, 2010 -- Papercutz is re-launching the Nancy Drew and Hardy Boys graphic novels – and the first volumes of each are a delight. 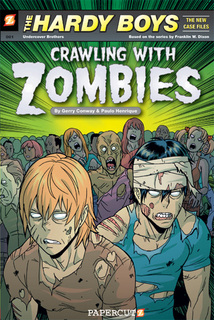 "Hardy Boys: The New Case Files" #1 ($6.99) is titled Crawling with Zombies,” and revolves around new phenomena like zombie walks and social media. It also presents something new for the Hardys, but as old as Cain and Abel: the normal competition and resentment between adolescent brothers.

This budding rivalry comes across naturally and organically, so much so it has that “why didn’t I think of that” quality. But it’s no surprise why it’s done so well, as Zombies is the first in the series by new writer – and comics legend – Gerry Conway. Conway, the co-creator of The Punisher and former writer of virtually every major comics character, has also written loads of television, including a stint as story editor for Law & Order.

And why has this award-winning, veteran scribe signed on for Hardy Boys graphic novels? Turns out he’s a fan!

“Working on the Hardy Boys in graphic novel form is the fulfillment of a childhood dream,” Conway said. “The first book I ever owned was The Mystery of Cabin Island, and it inspired in me a love of fiction that continues to this day.”

Conway asserts that the Hardys are “iconic American heroes -- as iconic as Superman or Tarzan.” And he ought to know, having written most of them, from Spider-Man to Batman. 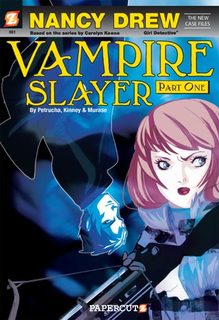 “Like all iconic heroes they're both larger than life and human-sized,” he said. “As a boy, I saw my own imagination and eagerness for new experiences reflected in the adventures of Frank and Joe (and of course Chet); they were kinds of kids I wanted to be. When I realized I wasn't going to grow up and become the world's greatest amateur detective like Frank or Joe, I decided to become the next best thing: Someone who'd write about their adventures. Luckily, it only took me 50 years to get there.”

Conway is joined by Paulo Henrique, who illustrated the last eight books in the previous series. Henrique draws in a manga style, but doesn’t let his chibis and such get too intrusive.

Meanwhile, Nancy Drew: The New Case Files #1 deals with another pop-culture fad. Vampire Slayer Part One ($6.99) riffs off Twilight, Buffy the Vampire Slayer and other blood-sucking, bump-in-the-night fun. Writers Stefan Petrucha and Sarah Kinney handle Drew’s pals George, Bess and Ned as a sort-of bumbling, off-brand Scooby Gang, which had me occasionally laughing out loud. He also fleshes out the star’s personality a bit, allowing her social clumsiness to energize the plot as often as her obvious brilliance. Artist Sho Murase draws manga style, but with the breathless forward motion of Western storytelling. Another discovery this week was less pleasant.

When Dark Horse began the Mighty Samson Archives a few months ago, I wondered briefly why I had so few issues of that series from the 1960s, unlike Gold Key’s other major super-doers, Solar, Magnus and Turok. With Mighty Samson Volume Two ($49.99), I remembered why.

The first volume reprinted the first six issues of Samson, which were entirely by writer Otto Binder (Captain Marvel, Superman) and artist Frank Thorne (Red Sonja). They were absorbing, as they were when I read them originally in 1965-66. This volume, however, only has one issue illustrated by Thorne, #7 – the last of my original collection from the 1960s. And why I quit buying Samson is now obvious, in that issues 8-14 (which flesh out this volume) are by artist Jack Sparling, whose work I have never enjoyed. The stories still have that Binder sparkle, but for me the fun is tamped by an artist whose sketchy over-rendering can’t overcome his inability to draw basic anatomy – such as eyes that line up on the same plane.

On a happier note, writer Grant Morrison has been carefully setting up a new status quo for the Dark Knight for several years, culminating in the new Batman Inc. title, with hordes of Bat-characters – not only in Gotham City but around the world. The main thrust of that set-up took place in Batman and Robin, and now issue #7-12 of that series has received the deluxe reprint treatment. B&R Vol. 2, Batman vs. Robin ($24.99) definitely deserves it, as both Morrison and artist Cameron Stewart have done some top-notch work.

...Were the European original Smurfs ever exposed much in the US prior to now ?????????

It appears that they received VERY little love on the Ewe Ess Aye racks , and I'm uncertain whether Peyo's original version was published much here at all !

By the time the H-B Smurfs TV series came along , kiddie-style comics had really tended to fall along their , alas , downward spiral in attention/amount...

Comment by Jeff of Earth-J on January 17, 2011 at 6:50pm
Mighty Samson: I didn't mention this last time because it wasn't relevant and we both enjoyed volume one, but one of my comics guides says "the quality of this title is considerably lower as Jack Sparling hacks out one issue after another."

Nancy Drew and the Hardy Boys sound pretty neat. I have sampled some of PaperCutz earlier Nancy stories and found them to be pretty bad. The art was just awful and I laughed at how simplistic the mysteries were. If you're giving the even newer version a "thumbs up," I will happily try Papercutz again.

An aside: I have been tickled ... uh ... blue ... by PaperCutz Smurf reprints.I can't believe how funny those first two volumes were. Can't wait for more, and I'm kinda hoping they eventually try some original stories.

Comment by George on January 15, 2011 at 6:51pm
Now we know how to make 80-year-old icons relevant for a new generation. Vampires and zombies! Duhhhh.

Comment by Luke Blanchard on January 15, 2011 at 1:04pm
If you'll pardon me, I think you've written "Mark Miller" when you meant Grant Morrison in the final paragraph.

The Baron replied to Steve W's discussion A Cover a Day
"It's Bender's grandfather!"
13 minutes ago

Jeff of Earth-J replied to Steve W's discussion A Cover a Day
"I'll start the month with this recent beauty:"
35 minutes ago

The Baron replied to Steve W's discussion A Cover a Day
"I'm reasonably certain that Astro Boy was the first fictional robot that I ever heard about."
1 hour ago

JD DeLuzio replied to Steve W's discussion A Cover a Day
"And it's December 1.... So here are Jed and all his kin dealing with a suitably old-timey…"
1 hour ago

Luke Blanchard replied to Jeff of Earth-J's discussion DC's 1st Issue Specials
"I think this was the first Metamorpho story I read. I like the original series, but this issue…"
5 hours ago

Jeff of Earth-J replied to Emerkeith Davyjack's discussion All-purpose newspaper strips discussion
"Oh, very nice! Above and beyond the call of duty, sir!"
10 hours ago

ClarkKent_DC replied to Emerkeith Davyjack's discussion All-purpose newspaper strips discussion
"So there you have it, from A to Z. Happy 100th Birthday, Charles Schulz!"
10 hours ago