'Nao of Brown' is very good, but falls short of great

Not all graphic novels work on every level, nor are they to every taste. This week I’d like to look at some books that came oh-so-close to greatness, only to fall short just a tad.

At the top of the list is The Nao of Brown ($24.95, SelfMadeHero), by writer/artist Glyn Dillon. This is an absolutely beautiful book, executed with sparkling artwork, insightful characterization, delightful dialogue and a soulful poignancy that will bring more than one reader close to tears. Too bad all of that isn’t in service to a better story. 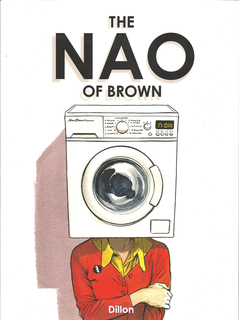 First the good news. Dillon is a masterful artist, blending not only technique – it’s mostly watercolor, but I see some other media in there – but also style, hinting at some previous masters from both East and West. And Dillon’s mastery is more than just technique. His storytelling skills are impeccable; his timing perfect; and his postures, blocking and facial expressions reveal reams of information all on their own.

The characterization is equally stellar. It won’t be hard for many readers to fall in love with the star, Nao Brown, a half-Japanese/half-English twentysomething living in London. Her co-worker Steve, her roommate Tara, her would-be boyfriend Gregory, even the walk-on characters at her Buddhist gatherings are all breezily revealed through dialogue, and are mostly very charming.

But the downside is that all of this effort doesn’t lead to much, and where it does aim for something important it fails. For example, Nao suffers from a kind of mental illness where she has brief, violent urges to do terrible things to people. The book jacket describes that as Obsessive-Compulsive Disorder, which it’s not, and worse, is a more serious problem than this book cares to admit. I admire how effortlessly Dillon communicates these flashes through color and technique, but honestly, this is too light-hearted an approach to the serious issue of mental illness. It fares badly in comparison to, say, David B.'s Epileptic.

Secondly, while I enjoyed the ride, it didn’t go anywhere. The ending is disappointing, falling somewhere between expected and “so what?”

Which doesn’t mean I won’t recommend The Nao of Brown, because I will. It’s a good book. It’s just inches off from being a great one.

Meanwhile, Vertigo is adapting into graphic-novel form the popular novel (and movie), The Girl with the Dragon Tattoo. That’s a task made formidable by a lot of hurdles: the talking-head nature of the story; its length and density; and the public’s familiarity with the ending (which murders any hope of suspense).

Crime author Denise Mina (Deception, Field of Blood) does a solid job of adaptation in The Girl with the Dragon Tattoo Book 1 (of 2, $19.99), but – as I alluded to above – it’s not like we don’t know what’s going to happen next. Artists Leonardo Manco and Andrea Mutti do clear, clean work, and Lee Bermejo (Batman: Noel) delivers a knockout of a cover. But, while good, Tattoo will never be great, by its very nature as an adaptation.

Lastly, points to writer Mat Johnson (Incognegro, Dark Rain) and artist Mutti (see above) for not shying away from politics, which most publishers avoid because in most cases you lose half your potential audience as soon as a point of view is established. I just wish their graphic novel Right State (DC/Vertigo, $24.99) was more plausible.

The plot involves a right-wing radio host going undercover in an extremist militia group at the behest of the Secret Service, who have evidence the New Dawn Militia plans to assassinate the president. While interesting, it’s doubtful the Secret Service would go to the likes of Rush Limbaugh or Michael Medved for such a sensitive mission, not only because of liability issues, but because – well, why on earth would they trust the president’s life to the non-existent espionage skills of an amateur? Nor would a radio host of any political persuasion likely take the job if offered, because, frankly, it’s probably a suicide mission. Further, what radio host is like our protagonist: ex-military, with Special Forces training, and still in awesome, mission-ready shape as a civilian? (Points to Oliver North for being one out of three.)

I could still overcome all that – and the occasional bout of giggles when I pictured Limbaugh in the role – except that the characterization and dialogue of the conservative characters don’t ring true for me. Frankly, while not insulting, the characters’ opinions and rationales read like a sympathetic liberal’s idea of how conservatives think. Add to that some Apocalypse Now riffs and I was glad to get to the end of the book for all the wrong reasons.

Right State was a heroic attempt at a political potboiler based on real-world concepts that, in its attempt not to offend anyone, won’t convince anyone.

1. The Nao of Brown is a beauty, but not a classic. Copyright SelfMadeHero.

2. The Girl with the Dragon Tattoo Volume 1 is as good as adaptations go. Copyright DC Entertainment Inc.

I read Right State as well, Cap, and I was pretty unimpressed with it. Like you said it was so implausible, and also pretty heavy handed.

Jeff of Earth-J replied to Jeff of Earth-J's discussion Terry Moore - The SiP-verse
""When Annie Graham's lifeless body washes up Venice beach, the nation mourns the loss of…"
3 minutes ago

Jeff of Earth-J replied to Jeff of Earth-J's discussion Swamp Thing
"Yes, and although it is occurring in tandem with the Crisis on Infinite Earths, it is not the…"
5 minutes ago

Jeff of Earth-J replied to Captain Comics's discussion This Week in Comics: May 23-29, 2022
"PS Artbooks Roundup: This week, the Space War volume one HC shipped to my LCS. Also v2 Dick Briefer…"
2 hours ago

Randy Jackson replied to Jeff of Earth-J's discussion Swamp Thing
"With the introduction of Constantine, Moore begins to weave his major epic story that will reach…"
4 hours ago

Jeff of Earth-J replied to Jeff of Earth-J's discussion Swamp Thing
"ISSUES #38-39: I have lived in Texas for 20 years now. I cannot always remember precisely when I…"
5 hours ago

Dave Palmer replied to Steve W's discussion A Cover a Day
"Have we visited the Planet of Vampires yet this month? Pat Broderick inked by Neal Adams and Neal…"
6 hours ago

JD DeLuzio replied to Steve W's discussion A Cover a Day
"..."
8 hours ago

Captain Comics replied to Wandering Sensei: Moderator Man's discussion What Comic Books Have You Read Today?
"This is by far the best description of the Stooges' appear I've ever read. It certainly…"
14 hours ago

The Baron replied to Wandering Sensei: Moderator Man's discussion What Comic Books Have You Read Today?
"The Robonic Stooges is an adaptation of the short-lived (September 1977 - March 1978) cartoon…"
17 hours ago