Nbm's 'Odd Hours' GN makes the most of its Louvre setting

One especially good teacher is the series of graphic novels commissioned by The Louvre, the famous French art museum. The various books in this series are individual visions by various European creators, with no connection other than all being set in The Louvre. 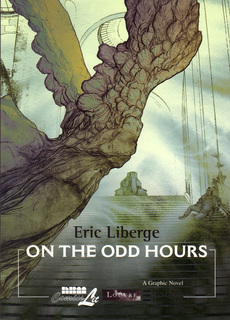 The latest is On the Odd Hours (NBM/ComicsLit, $14.95), by Eric Liberge. The odd hours of the title are ones wherein the striking of a gong allows the rebellious spirits of the art in the museum to come to life and express the emotions imbued in them by their creators, while the rest of the world remains frozen and unaware.

To this end a deaf night guard is necessary, so that he or she isn’t frozen by the gong as well, and can return the works of art to their proper places for the “even hours.” Enter Bastien, our protagonist, a rebellious, mohawked deaf/mute who finds peace for his own inner torment by releasing the inner torment of the art.

To be honest, I didn’t find this story as compelling as the previous entry, Museum Vaults. Nor did I much like Bastien, who is characterized as an unpleasant person as a plot point. But the true star isn’t the story, it’s the art. Liberge uses pastels over fine pen-and-ink linework, and where necessary engravings or digital images to do justice to, say, the “Winged Victory of Samothrace” bursting into flight.

The fact that I now can connect the “Winged Victory” name to a statue I’ve seen a jillion times in pictures is a testament to the educational aspect of the story. Liberge allows readers a glimpse into the famous museum most of us will never have the opportunity to visit, which makes the book quite a bargain. 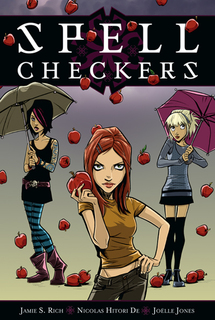 * Spell Checkers (Oni Press, $11.99) is a high concept bit of fluff that’s really well executed: It’s the story of three high school girls who are also witches, and use their power to get good grades and make life easier. Whee!

Cynthia (the redhead), Kimmie (the brunette) and Jesse (the blonde) are like “Mean Girls” on steroids, almost without conscience, completely in control of their environment and spoiled beyond belief. Until someone casts a spell on the coven, and the actual plot – whether it’s an inside job or not – becomes easy to forget as these spoiled brats throw delightfully petty, self-absorbed, magical temper tantrums.

I don’t know how writer Jamie S. Rich channels snarky teenage girl dialogue so well, but it’s really a treat. Of course, I don’t actually know what that teenage girls sound like, but Rich’s work is utterly convincing – and hilarious. So maybe I've learned something there.

The art, by Nicolas Hitori De and Joelle Jones, is sort of generic manga. Still, it’s cute without being unctuous.

Oni hints that this is the first of a series, and that would suit me fine.

* Sometimes when reading reprint collections, I feel a bit like a comics archaeologist. Sure, other people are aware of the twists and turns of the industry’s past, but when it’s new to me, I feel a giddy thrill of discovery. 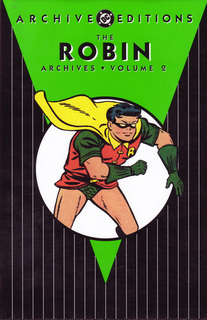 Such was the case with Robin Archives vol. 2 (DC Comics, $59.99), the second in a series reprinting the Boy Wonder’s solo series from the 1940s-50s Star-Spangled Comics. I knew this series existed, and the previous volume (which reprinted S-SC #65-85) held few surprises – it was a solo Robin generally helping other boys in adventures somewhat less violent than those found in the other Bat-titles of the time (Batman, Detective and World’s Finest).

But this second volume (reprinting S-SC #86-105) has many stories with Batman as the star, stories no different than any other Bat-stories of the time. That was a surprise, as was the fact that this long-running superstar team failed to hold the cover! A feature called “Tomahawk” (set in the Revolutionary War) bumped the Caped Crusaders off the cover with Star-Spangled Comics #96.

In today’s world, where Batman is DC’s most popular character, it’s almost inconceivable to imagine a world where a guy in a raccoon hat and buckskins was a bigger draw. Especially one that is virtually unknown to today’s fans.

Which begs the question: Hey, DC, where are some Tomahawk reprints? This guy must have had something going for him!

Comment by Travis Herrick (Modular Mod) on April 15, 2010 at 3:54pm
I usually like Jamie S. Rich's stories as well, but I don't find out about them until well after they come out. I will have to look for Spell Checkers at my LCS. I think he and Joelle Jones make a fine creative team.

Were there any particular creators working on those Robin stories or are those artist credits lost to the winds of time?

Comment by Captain Comics on April 15, 2010 at 4:43pm
Now that you mention it, Travis, the artist throughout Robin Archives v. 2 was the inestimable Jim Mooney. It was early enough in his career, however, that he wasn't terribly recognizable. Or perhaps he was aping DC's bland '50s house style. I'm not complaining; it was professional and clean. But it didn't shout "JIM MOONEY"!

I don't recall who the writer was, if they listed one. I'll check when I get home.