A lot of novelists, screenwriters and other big names are writing comics these days, but it’s still a jaw-dropper when Stephen King does.

That’s his name at the top of American Vampire, a new ongoing series at DC’s mature readers Vertigo line. Each issue actually contains two stories, only one by King, continuing for the five issues of the first story arc. 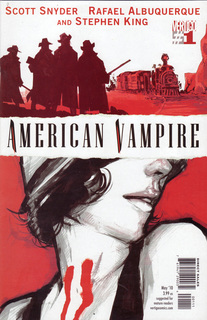 One story is written by Scott Snyder (Voodoo Heart), and is set in Jazz Age Hollywood. Our heroine is Pearl, a wannabe actress, who is a thoroughly modern woman (for 1925) with big dreams, and who is far tougher than she looks. When she meets reclusive director B.D. Bloch and his undead friends, she’ll have to be.

It also features as a supporting character Skinner Sweet, a grubby cowboy who plays a sort of Greek chorus in the first issue but is obviously destined for a bigger role. We know this because Snyder gives him a lot of “screen time,” but also because the second story – the one by King – is his backstory.

We meet Skinner, a bank robber and killer, in 1880 Colorado. He’s been arrested, and has a date with a noose, when the owner of the banks and railroads Sweet has robbed shows that he’s a bloodsucker in more than a metaphorical way. Thus begins Sweet’s afterlife odyssey, a uniquely American one – hence the title. After the first arc, Vertigo says, Snyder will pick up the Sweet story and follow his, ahem, bloodline.

And as good as the stories are, I’d be remiss in not mentioning Rafael Albuquerque’s superb artwork. His clean, hard-edged work is very cinematic, as if you’re reading a Sergio Leone movie on paper, with touches here and there that remind one of DC’s Filipino artists of the ‘70s and ‘80s (such as Alex Nino and Alfredo Alcala). Albuquerque is from Brazil, probably best known in this country for his work on Superman/Batman and Northlanders, but as is often the case, this foreigner is more comfortable with Westerns than many American artists.

Vampires are all the rage these days (hopefully edging out zombies, which have outstayed their welcome), but Snyder, King and Albuquerque have definitely come up with a fresh angle on undead hijinks – one that feels as comfortable as a pair of old boots, but is as creepy as ghost stories around the campfire. This is truly an American vampire tale, one that disdains Europe’s rules for the genre and is as rowdy as the old West. 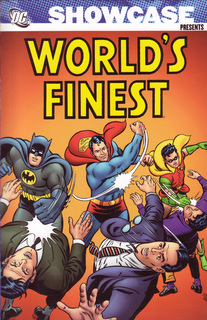 Speaking of DC’s Superman/Batman, that series is an update of World’s Finest Comics, a book that began teaming the Man of Steel and the Dark Knight in 1954, and did so (with a few hiccups) until cancellation in 1986. The reprint series Showcase Presents: World’s Finest is collecting those team-ups in chronological order, roughly 500 black-and-white pages at a time.

The latest in this series is SP:WF vol. 3 ($17.99), collecting stories from late 1964 to early 1968, and I consider this era the highlight of the title’s run. Of course, I first read these stories when I was about 10 and have fond memories, so I might be prejudiced.

Still, I think they remain entertaining 45 years later. The stories are mostly by top-notch veterans of the era’s Super-books, like Leo Dorfman, Edmond Hamilton and Cary Bates. The art is mostly by one of the best teams to ever draw the Man of Tomorrow, Curt Swan and George Klein.

As you’d expect, these Super-creators relied heavily on the Super-mythology with which they were so familiar – Kandor, the Daily Planet, Jimmy Olsen, the Fortress of Solitude, etc. This is in contradistinction to 1950s World’s Finest, which was written mostly by Bat-writers (like Bill Finger) who emphasized Batman’s world.

Also, it’s interesting how many of these stories focus on the concept of secret identities. Time and again the story turns on a masked character appearing whose identity one or both of our heroes must figure out. Or one of our heroes will dress up as someone else, and the mystery is why. In one case, our heroes hypnotize each other into forgetting the opposite’s secret identity, and they have to find out who each other are!

I don’t know what that means, if anything. But that’s the sort of context a series like this brings, and I’m grateful for it.