'New Deadwardians' presents both a clever world and an absorbing story

If you thought Pride and Prejudice and Zombies was a clever idea, have I got a book for you!

The New Deadwardians (Vertigo, $14.99) is like a mash-up of Downton Abbey and The Walking Dead, with a sprinkle of True Blood. If that seems a preposterous combination, rest assured that it is not – in fact, it’s blood-suckingly, zombie-bitingly, aristocratically delightful. 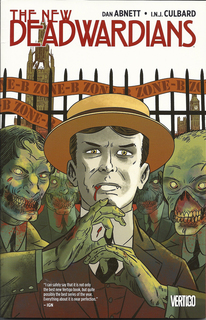 What makes it work is the thought that Dan Abnett, a fan-favorite comics writer, has put into the world his story inhabits. Deadwardians takes place in London in 1910, the tail end of the Edwardian age (the same era as Downton Abbey), and he brilliantly re-creates the sharp class differences of the time. I’m no expert, but it seems to me that Abnett – a Brit himself – deftly portrays the differing accents, occupations and social norms of both “toffs” and working-class Londoners.

But not the lower classes, because they’re all zombies! Where our world and Abnett’s diverge is a mysterious zombie plague that breaks out in 1861, we learn in flashback, and threatens to overwhelm the world’s only superpower, Great Britain. In desperation, the ruling class of Victorian England takes “the cure”: They become vampires, so that the zombies take no interest in them.

That sacrifice – upper-class English are immortal, but no longer experience pain or pleasure – provides enough of an edge to achieve an uneasy equilibrium with “the restless.” The cities are walled off, to protect the working class – the only normal humans left – so they can continue tending the industries that make England pre-eminent. The dead, drawn by the smell of living beings, lurk by the fences. These creatures, standing outside the life and wealth of England, are both a constant threat and, metaphorically, a subtle commentary on class distinctions.

Not so subtle is the idea of the idle rich being literal as well as metaphorical blood-suckers. But hey, how could Abnett resist?

Needless to say, this world would be fun to explore all on its own. But there’s a plot, too – a murder mystery in a world where most people aren’t alive anyway. The story focuses on the efforts of the last homicide detective in London to ferret out the who and how of the impossible death of a vampire without the use of impalement, decapitation or incineration. His investigation takes him to the lowest establishments of the East End (whorehouses, now called “thirsty houses” for the new service they provide the upper class), to the rot and corruption in the highest reaches of this society.

Often when a writer conceives a huge, comprehensive and cohesive world, the story suffers in favor of displaying all the clever bits. But not Abnett: I found myself genuinely engaged by the murder mystery, as well as the strange existence of Chief Inspector George Suttle, Murder Squad. I hope Deadwardians sells well enough that we’ll see him again.

I should mention that the art is by I.N.J. Culbard, with whom I am not familiar. It seems to be from the same school as Guy Davis, who has drawn Dark Horse’s B.P.R.D. for years: Not flashy, kinda sketchy, but it gets the job done. 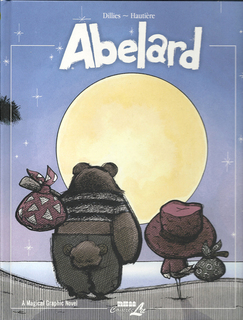 I wasn’t terribly impressed by Bubbles & Gondola, a 2012 piece of fluff about friendship and self-worth by new French artist Renaud Dillies, but he’s more than made up for it with his sophomore effort at NBM, Abelard ($22.99).

Written by another Frenchman, Regis Hautiere, Abelard is set in an anthropomorphic world that’s just as lousy as ours, about a small bird who falls in love with another bird, and wants to give her the moon, and so decides to go to America, where rumor has it they have developed flying machines. (There’s no other hard evidence, but it seems the story is set at the beginning of the 20th century.)

The small and naïve Abelard sets off – he’s apparently somewhere in Europe when the story begins – and his journey isn’t easy. He meets with the cruelty and brutality of the real world, and is befriended only by a cynical bear who ridicules Abelard’s optimism. Nevertheless, the friendship endures to a bittersweet ending.

OK, it’s not Shakespeare, but you can look at it as a road-trip story, or a tale about loss of innocence, or even an aspect of Joseph Campbell’s “Hero’s Journey.” That’s a pretty heavy subtext for what looks on the surface to be a simple story.

I would *like* to think it was because they were emotionless bastards, but as I thought about it for longer than 5 seconds it is because they are snobs. If they were truly without feelings then they wouldn't bother investigating any deaths.

I was talking to my wife about Deadwardians, and mentioned that, as vampires, the upper-crust English would have enough of a military edge to wipe the zombies out completely, and I wondered why they hadn't. My wife replied, "Why would they bother?" And she was right, because either their half-life rendered them incapable of caring, or because their class made them incapable of caring. It's just another way this story can be read two ways.

Also, Scotland Yard only has one homicide detective. Evidently they only investigate crimes that involve the upper classes. Surely there are tons of murders in the crowded East End, but evidently they just don't care what the "bright" do, and do to each other. Is it because they're emotionless vampires, or because they're snobs?

I really liked it as well. When I first saw it I was just like,"Oh joy another zombie book." After I read the full description I was on board totally. I am a sucker for a murder mystery. I really liked the art as well. Then again I am a Guy Davis fan.

And that the Vampires must protect the Humans from the Zombies so that they have 1) a work force and 2) a food source which must be preserved! That was my problem with Marvel Zombies: once you kill/eat/transform the entire world, NOW what do you do?

That's funny. I almost didn't pick it up, too. I thought it would too similar to Victorian Undead without the bonus of having Sherlock Holmes in it. But the novel premise (The Elite becoming vampires to save themselves from the Lower Class Zombies) was so intriguing that I had to try it!

My wife loved it, too, and she's pretty picky.

New Deadwardians was one of my favorite books of last year. Of the four books of Vertigo's launch of new titles last year, it was the one I enjoyed the most... and, oddly enough, the only one of the four that I hadn't planned on picking up at all. But I gave it a chance anyway (maybe it was a light week?), and that first issue pulled me right in.

I enjoyed New Deadwardians immensely. Finally a logical reason to have a vampire protagonist. It's the sleeper of 2012!

Lee Houston, Junior replied to Steve W's discussion A Cover a Day
"Okay, let me open December with this one, courtesy of the Grand Comics Database... And what was…"
13 minutes ago

The Baron replied to Captain Comics's discussion Aline Kominsky-Crumb dies
"Ah, what a shame/"
29 minutes ago

Jeff of Earth-J replied to Captain Comics's discussion Peter David suffers series of strokes
"I'm very sorry to read this news. I remember well his previous stroke, but he seemed to have…"
32 minutes ago

Jeff of Earth-J replied to Jeff of Earth-J's discussion Unit: Nemesis
"Once again, thanks to Bob for indexing this series almost a year before I got around to listening…"
39 minutes ago

Richard Willis replied to Steve W's discussion A Cover a Day
"I managed to use only a few Archie covers last month. Here's a recent reuse of this gag,"
40 minutes ago

Richard Willis replied to Steve W's discussion A Cover a Day
"My first couple of posts will be replies. This is apparently the original issue cover."
43 minutes ago

Jeff of Earth-J replied to Steve W's discussion A Cover a Day
"Bozo the Robot appears regularly (with new dialogue) in Sham Comics."
1 hour ago

Jeff of Earth-J replied to Emerkeith Davyjack's discussion All-purpose newspaper strips discussion
"While everyone is in the mood. allow me to recommend Peanuts: A Tribute to Charles M.…"
4 hours ago

Jeff of Earth-J replied to Steve W's discussion A Cover a Day
""Neutro does not know the difference between right and wrong." Here's what my guide…"
4 hours ago