I don’t mean to be snarky, but let’s face it: A guy who shoots arrows isn’t very impressive on a team that features the Norse god of thunder. And his comic-book history is almost entirely with the Avengers – not because he’s really useful, but because he hasn’t had any success at all outside the team.

Hawkeye had an unimpressive start in 1964, a circus marksman with a complicated, garish, purple outfit who initially tried to be a superhero, but was suckered by a pretty face into attacking Iron Man a few times. And, duh, he lost every fight. I mean, c’mon, he brought a bow and armor to a repulsor-ray fight. 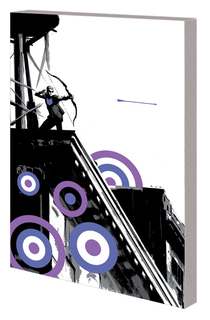 His big break came in 1965 when the famous Stan Lee decided to populate the Avengers with characters who didn’t have their own books, because Lee was tired of keeping up with events in other books when he was writing Avengers. Hawkeye was tapped to join the team, and he’s been with them off and on ever since.

And it’s been in the pages of Avengers where the character has enjoyed what little development he’s had. For example, it was in a 1969 issue of Avengers that he was finally given the civilian name “Clint Barton” – prior to that, he was simply called “Hawkeye.” That’s right: He was such a minor character he didn’t even have a name for five years.

Which is not to say Marvel didn’t try to turn Hawkeye into a player. He’s headlined a number of series and miniseries over the years, sometimes teamed with other characters. But none have ever taken off. Until the Avengers movie, it seemed the Avenging Archer was destined to be a second banana forever.

But then the movie turned Hawkeye into a household name. So I figured it was only a matter of time until Barton got his own series, one where he’d somehow transform into his movie counterpart. I was right – and also wrong.

The archer did indeed receive his own eponymous series last year, and the first trade paperback from that series is already out. Hawkeye Vol. 1: My Life as a Weapon (Marvel, $16.99) collects the first five issues of the new Hawkeye series and an older story from another series. And, to my amazement, it really hits the mark. To no one’s surprise, the new series depicts a Hawkeye who has ditched the ugly purple longjohns he’s worn for 50 years in favor of togs that resemble the movie version: purplish leather/Kevlar and sunglasses. He also has the same haircut as Jeremy Renner, who played Hawkeye in Avengers the movie, and therefore appears at first glance to be the film version. Thus, my prediction was partly realized.

But despite that bow to the movies, the comics version of Hawkeye hasn’t changed his personality much. He’s still irreverent, impulsive and an inveterate skirt-chaser, as opposed to the taciturn assassin we saw in the film Avengers. And that turns out to be a smart move, despite the comic-book Hawkeye having failed to find an audience for half a century.

That’s because writer Matt Fraction has opted to focus on Barton’s time when he’s not Avenging. Hawkeye features Barton in civvies, applying his skills to pedestrian crises like lousy landlords and fetching damsels in (mild) distress. This approach probably wouldn’t work if written by someone more traditional than Fraction, whose charm rises largely from snappy, seemingly meandering dialogue and unconventional story structure that somehow works out in the end.  His voice is perfect for Hawkeye, an erratic character who never thinks before speaking or acting.

The series also works because of the art by David Aja (issues #1-3) and Javier Pulido (issues #4-5). Both artists eschew the bombastic superhero approach for a more subdued, organic feel, which is a comfortable fit for a series starring a guy in blue jeans with no superpowers. 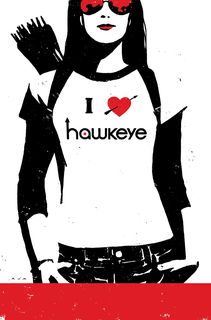 I will note for the record that I have mixed feelings about one member of the supporting cast, a teenage girl that took on the role of Hawkeye a few years ago when Barton was temporarily dead (long story). The older Hawkeye (he appears to be in his late 20s) has more or less adopted the teen Hawkeye as a protégé, and the amusing interplay between the two sparkles, because it plays against expectations: She is far more adult than he in many ways.

My uncertainty arises because she has a crush on him. That’s OK because it seems natural and comfortable – why else would she take his name, and want to hang out with a guy so much older than herself? To my relief, Hawkeye the Elder seems oblivious to Hawkeye the Younger’s romantic interest, but my fear is that Fraction may succumb to the temptation to allow Barton to reciprocate. And that would make my skin crawl.

But for now, Hawkeye is one of the best series on the stands. It isn’t the movie Hawkeye, but I suspect you’ll like this guy just as much.

I enjoy it more.