It’s still a few weeks from Halloween, but the scary comics are already here. Some examples:

* Swamp Thing has a history of renewal, and the character has been reborn once again as part of DC Comics’ “The New 52,” the line-wide re-launch that started in September 2011. The new Swamp Thing is by writer Scott Snyder (Batman) and artist Yanick Paquette (Ultimate X-Men), and has been a surprise hit for DC. 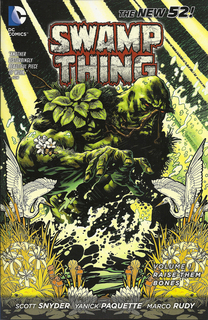 This new version owes quite a bit to its predecessor; in fact, it’s more a continuation than a reboot. The “Old 52” version started with botanist Alec Holland, who had invented a serum that turned him into a monster searching for a cure, only to discover he really was just a plant monster who had Alec Holland’s memories. (Holland himself was dead.) That led Swampy on a journey of self-discovery, where he found out he was just one in a line of swamp monsters whose job it was to protect the plant world, known as “The Green,” which itself had a group consciousness which coalesced in The Parliament of Trees, all the former swamp monsters now rooted in the Amazon rainforest.

However, at the end of the “Old 52,” the Swamp Thing had more or less been destroyed, and Alec Holland had been resurrected from the dead. That’s how this series begins, with Holland being forced to recognize that The Green is without a champion – a job he is destined to fill – and that The Green, and his family, are under assault by something awful, an ancient enemy called The Rot. The first seven issues, which have been collected as Swamp Thing Volume 1: Raise Them Bones ($14.95), tell the story of Holland’s decision about whether (and how) to embrace that destiny.

It’s also creepy as all get-out. Swamp Thing is a genuinely scary book, as it was always meant to be. It’s also gently slouching toward a crossover with another surprise hit, Animal Man, starring Buddy Baker, a former superhero who is now the champion of The Red (animal life), who is also battling The Rot. Finally, Them Bones rings in former supporting character (and Swamp Thing lover) Abby Arcane – although she is not quite what she used to be, either.

Even if you’ve never enjoyed Swamp Thing before, you should try this version. It will, ahem, grow on you.

*I haven’t read the first three collections of Roman Dirge’s Lenore, so I entered the latest, Lenore: Swirlies (Titan Books, $17.95), with no idea what it is. After reading it, I’m still not sure.

I can only describe Lenore as Casper the Friendly Ghost on acid. Lenore is a dead girl living in a forest doing ordinary things, except for that fact that everyone she knows is as unliving as she is. There’s a damaged, animated doll (I think) who is Lenore’s best friend, and some kind of shape-changing demon who wears a jack-o-lantern candy bucket as a mask (or possibly head), and an animated sock-puppet that seeks Lenore’s affections. It’s all grisly black humor, but in such a light-hearted way you almost laugh at all the human children who get killed in the first story. Well, almost.

As I put down the book I realized I had been somewhat entertained, but could not imagine for the life of me who the target audience might be. It seemed too grisly for children, but insufficiently sophisticated for adults. But by sheer coincidence, my wife donned a Lenore T-shirt later that night! It was a shirt she’d gotten at the comic shop without any idea who Lenore might be, because it tickled her rebellious, bad-girl, tomboy side, and I had never noticed it before. When I showed her “Swirlies” she lapped it up like a starving cat.

If any of that makes sense to you, you might give Lenore a try.

* Halloween Classics: Graphic Classics Volume Twenty-Three (Eureka Productions, $17.95) is the latest in this series of collections of literary adaptations. Given the title, you can imagine that the stories therein are on the scary side, but even better, they fall into the category of “not often adapted.”

Washington Irving’s The Legend of Sleepy Hollow is probably the best-known tale included, but I was also pleased to find The Cabinet of Dr. Caligari (adapted from the screenplay of the 1920 silent movie), and stories by Mark Twain (A Curious Dream), Arthur Conan Doyle (Lot No. 249) and H.P. Lovecraft (Cool Air).

As with all anthologies, styles and – to some degree – quality varies. But I didn’t find a clunker in the bunch.

2. Lenore: Swirlies is the fourth collection of this black-humor series. Copyright Titan Books.