On My Bookshelf, Finale 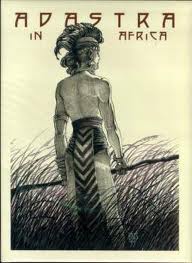 It’s been two months since I started writing about all of the comic books on my bookshelf. This series turned out to be a lot more extensive than I thought it would. But it also generated more discussion that I thought it would. So, for those still paying attention, here’s one last installment of the books that don’t even fit on my bookshelf (they’re sitting on a ledge beside it).
Adastra in Africa
Barry Windsor-Smith contributed some classic X-Men covers and stories. He was brought in as a special guest artist for Lifedeath I and II- a pair of stories dealing with Storm’s personal journey. She had lost her powers due to a government weapon created by Forge. Yet her weakness revealed her strength.
Storm continued as the leader of the X-Men without her powers and showed that she was a hero no matter what. Even so, it wasn’t an easy journey. Storm battled depression, rage and a few suicidal tendencies. Forge helped her through her struggles and the two fell in love. But that’s all background to this story. Smith prepared a third tale to be part of his Storm trilogy. In this installment, Storm discovers a small tribe living deep in the African desert. Resources are scarce. And the tribe has a policy of sending its oldest member into the desert to die whenever a child is born. Marvel shied away from the story because of a possible controversy over euthanasia. But Smith believed in the story and published it anyway, starring Adastra as a clear substitute for Storm. It’s a gripping story that raises more questions than it answers. And it could have stood proudly beside other X-Men stories that dealt with controversial subjects such as God Loves, Man Kills. 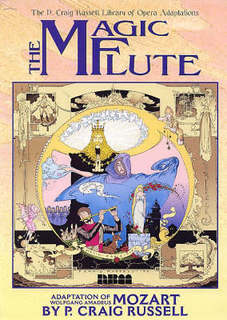 The Magic Flute, P. Craig Russell’s Opera Adaptations Vol. 2-3
I was introduced to P. Craig Russell’s other passion through the Ring of the Nibelung adaptation that he did for Dark Horse. I admired his artistry and his composition. And it was a great way to read a classic story. So when Russell’s earlier opera adaptations were collected in this three volume set, I was quick to scoop them up. They’re epic and emotional. They’re intricate and beautiful. They’re some of my favorite books.
The Adventures of Tintin (Les Aventures de Tintin) by Hergé
Tintin in the Land of the Soviets, The Blue Lotus, Tintin in America, Cigars of the Pharaoh, Tintin and the Broken Ear, The Black Island, King ttokar’s Sceptre, The Crab with the Golden Claws, The Shooting Star, The Secret of the Unicorn, Red Rackham’s Treasure, The Seven Crystal Balls, Prisoners of the Sun, Land of Black Gold, Destination Moon, Explorers on the Moon, The Calculus Affair, The Red Sea Sharks, Tintin in Tibet, The Castafiore Emerald, Flight 714, Tintin and the Picaros

I was introduced to Tintin in grade school. Our French teacher had several volumes of Tintin and Asterix in the back of the classroom. If you finished your homework before class was done, you were allowed to go to the back of the room and read comics. In French, of course. But they were still comics. I was a quick worker as a kid and I got to read a lot of comics. For the past ten years, I’ve been slowly building my Tintin collection. In English, this time. I finally bought the last few volumes this past summer.
CrossGen Illustrated
At the height of their popularity, CrossGen published this excellent art book. It includes summaries 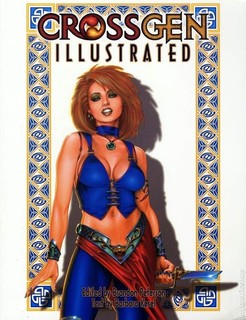 for each of their titles but the pictures are the real treat. There are two-page spreads and pin-ups and pencil drawings. It’s a reminder that, despite the derision that was (and sometimes still is) directed their
way, CrossGen employed some of the finest artists in the industry. 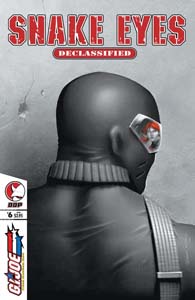 GI Joe: America’s Elite: The Newest War, Snake Eyes Declassified
I was late again. This time, it was Image’s GI Joe title. The J. Scott Campbell covers were enticing but I
had been burned on other nostalgia projects before. They never quite captured the tone I was looking
for. So I passed. But when Devil’s Due- now its own company- relaunched GI Joe, I finally decided
to give it a try. I was quickly hooked. I loved the combination of action and humor. I loved the fast
pace, the big explosions and the epic battles. It was better than the cartoons I remembered from my childhood. I bought the new series (after catching up via the trade collecting the first arc). I bought as many back issues from the Image series as I could. And I bought the trades collecting the original Marvel
series (as written about in part 4). It was kind of exhilirating to be reading three GI Joe series at the same time.
The Adventures of Red Sonja Vol. 1-3 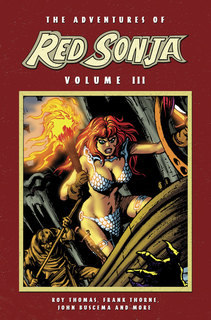 I was a big fan of Dark Horse’s collections of the original Conan comics. So I was excited when Dynamite put out similar collections of Marvel’s Red Sonja series. But I ended up being disappointed. Dynamite didn’t provide any extras (like Dark Horse’s outstanding afterwords by Roy Thomas). And the Red Sonja stories aren’t as good as Conan. The second and third volumes are better than the first, as Frank Thorne took over as the regular artist. 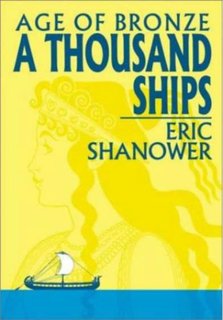 Age of Bronze: A Thousand Ships
Certain books make such an impact that you remember where you bought them. It’s like remembering where you were when you first heard a favorite song. I bought Age of Bronze at Flying Colors in Concord, California. The store had a great, open layout. And they had some really good displays of
independent comics. Those displays enticed me to buy Men of Mystery (a Golden Age reprint title), Red Star (see part 6) and Age of Bronze. Eric Shanower’s re-telling of the Trojan War remains one of my favorite titles. It speaks to the English major and history nut in me. I love how he weaves different sources together. I respect the research that he’s put into it and painstakingly relates to us in the letters page. But most of all, I enjoy the story. And that’s the main thing, isn’t it? 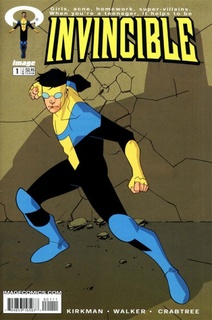 Invincible Vol. 1-3
The miscellaneous shelf lives up to its name with Red Sonja, Age of Bronze and Invincible sitting shoulder to shoulder.
Noble Causes Vol. 1-2, Vol. 1
Yes, I know the numbering is weird. Blame Image, not me. The first two volumes collect the early mini-series and specials. The second volume one collects the first arc from the ongoing series. And yes, this is another series that became a favorite, even though I was late to the party.
Tales of the Realm
This is one of the more obscure comics on my shelf. It’s a fantasy title by Robert Kirkman. But it’s not your normal fantasy title. It’s set in a modern world like ours- with cars and electricity and television- that also has fantasy elements- like elves and magic and trolls. The story follows actors from this modern fantasy world who are starring in a classic fantasy series on TV. It’s a humor title that unfortunately leaves you wanting more. It’s not as funny as it thinks it is. And it didn’t last long enough to explore the potential of its premise. 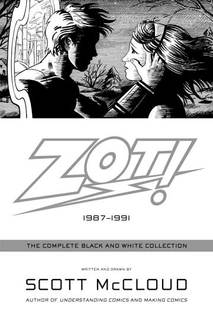 True Story, Swear to God Archives
I’m pretty sure this is another gift. But this time, it was a gift I gave to Anacoqui. She keeps it on my
bookshelf though.
Zot!: The Complete Black and White Series
The last entry is another gift from a fellow Legionnaire (thanks, Bill!). I wrote about it extensively on the previous version of the board. Short story: I enjoyed it a lot. Plus, it fits in well with my collection considering the number of other classic series from the ‘70s and ‘80s I have in trade paperback.
And that’s it. Well, mostly. Anacoqui has a few trades that will be added to the bookshelf when she’s finished reading them- like Diana Prince Wonder Woman, Jack of Fables and Hedge Knight. But I’ll let her write about them. Thanks for reading.
Finis

Comment by Travis Herrick (Modular Mod) on November 19, 2010 at 1:01pm
Adastra it should be noted was one the characters in "Young Gods" fro BWS' Storyteller series from Dark Horse. I read Storyteller, but never did pick up as I didn't care to much for the character in my least favorite of the series from Storyteller.

Age of Bronze is one of those series I feel really read a lot better in trade than individual issues. I really need to get that third trade which I never knew existed until I looked it up. How did I miss it?

Whenever I am looking for an easy gift for my brother I get him an Invincible trade, it is one of the few comic books he reads.

Comment by Jeff of Earth-J on November 20, 2010 at 11:22am
Adastra in Africa: Good stuff. I wish Marvel would reprint Lifedeath to shelve along with it.

P. Craig Russell: I like so much of PCR’s stuff; I’m surprised I’ve never read his adaptation of The Magic Flute.

Tintin: Here’s one I always wanted to try but never got around to. I will someday. I’m sure I’d like it.

Red Sonja: I’ve fallen so far behind reading the reprints of Marvel’s Conan that I decided to give a pass to Red Sonja and Kull figuring they’ll always be there should I change my mind.

Age of Bronze: I stopped reading following our discussion. I’ve continued to buy, however, to show my support. It “reads” better in “satisfying chunks” than periodical installments, anyway. One of these days I’ll make a personal reading project of it and get caught up again.

Invincible: What I’ve read of this series I’ve read entirely in trades. Then I missed a volume and fell behind. One of these days when I’m in the mood, I’ll get caught up again.

Zot!: I was the one who suggested Zot! for a reading project, then when the day came around I found myself too, too busy to either read it or participate in the discussion. I have three volumes reprinting issues #1-27, but Kitchen Sink Press went out of business before they completed the tpb reprint of the series. Sometime later I found a new copy of The Complete Black and White Collection on clearance at Half Price Books for five bucks. It duplicates #11-27, but was an inexpensive way to finish off the rest of the series. The Complete Black and White Collection omits the first ten color issues of the series, however, and I’ve long intended to start a new discussion of the series with issue #1.

“Someday” seems to be the theme running through this post.

Comment by Ana Canino-Fluit (Anacoqui- mod) on November 20, 2010 at 7:10pm
When you are ready to pick Age of Bronze, I am all for restarting the discussion...I am about 4 issues behind, but intentionally , unlike my stack of shame that stares at me mournfully every evening,